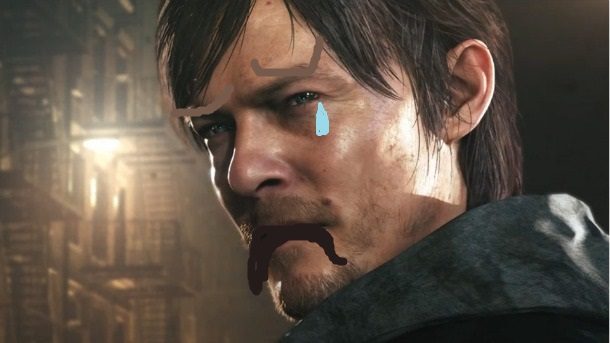 Yesterday afternoon my social media stuffthings where bloooowin’ UP with upset human beings over the (then) rumor that Silent Hills wasn’t a thing that was going to happen after all. Personally I was too busy dealing with some parasite I contracted from Mexico to care too much, but thanks to Pedialyte I’m 78.2% more awake and aware of life then I was yesterday.

So, allow me to have a moment:

“P.T. is being pulled from the PS store since it was created as a playable teaser for ‘Silent Hills’, but the distribution period and license usage within the demo have both now expired. Also, in response to what Del Toro said during the Q&A, Konami is committed to new Silent Hill titles, however the embryonic ‘Silent Hills’ project developed with Guillermo del Toro and featuring the likeness of Norman Reedus will not be continued.” – Company representative to Game Informer

“Our contract period with Reedus has expired. We will continue to develop the Silent Hill series.” -Konami to GameSpot

I dunno what the hell is going on with Konami and Hideo Kojima, but, like, they need to make mends and be happy and make rad games for us gamers who deserve everything. But seriously, I hope all things work out in the end, no matter what happens. Now if you need me, I’ll be crying for the next 20 minutes until I exhaust my hydration supply. /takes sip of Pedialyate