Part One left off with my crippled ass hobbling back to my hotel room. I had just seen the resort doctor, and she had instructed me to report any new symptoms to her should they develop. She even dropped the “H” word—HOSPITAL.

And there was no way I was going to a hospital.

The doctor had also prescribed me some pain medication, so while I was making my way back to my room someone was fetching the prescription for me downstairs. But as soon as I made it back to the room (ie; the bathroom) something different…uh, happened. And before I continue with this epic tale, I want you all to know that I’m not squeamish. I openly talk and joke about every bodily function with my friends and family. However, I know some of you might not be as comfortable talking or reading about those sorts of things so I’ll keep it as detail-free as possible. Because I care about you and stuff.

So with that, I’ll just say something pretty scary was going on with my body that has never happened before.

I ran (more like shuffled) back to the resort doctor and gave her the nitty and gritty details. She thought for a moment, and told me that if those NEW symptoms keep occurring to let her know later on that night. Because—she reiterated—hospitalization might be necessary; especially now.

I still scoffed. But nonetheless, I thanked her and went back to my room. A few minutes later my prescription arrived. I popped a pain pill and crawled back in bed.

Unfortunately, the pain medicine never helped and as the hours went on the stomach pain became worse and the scary symptom became scarier. Eventually the nurse called to check on me. I told her things hadn’t improved, and she told me she’d like me to be ambulanced to the hospital. Well, that was a little dramatic, especially since the hospital was about a seven minute drive from the resort. I told her I’d think about it and call her back. Then it hit me: I was in Mexico. I was sick. I had no clue what was wrong with me. And now I was about to go to a Mexican hospital? I hate to admit it, but I was more worried about the hospital bill I’d wrack up more than my current state of health. I mean, you hear horror stories. So I consulted with the group I was traveling with aaaaand… it decided I should just go to the hospital.

It’s weird, but as soon as I made the decision to go I finally realized how sick I was. I mean, I hadn’t been eating or drinking, and I needed to lean on others just to make it out to the taxi area. (I told you I wasn’t going to be hauled away in an ambulance! But if I could I totally would have jumped off of a wooden platform and hailed my Loftwing by pressing Up on the d-pad of life. #SkywardSwordReference)

The cab ride was nothing short of miserable. I didn’t mention it before, but every step I took felt like knives in my stomach and I don’t know if you know this, but drivers in Puerto Vallarta are absolute lunatics and the majority of the road we had to cross over was cobblestone. So, yeah. No bueno. But thankfully I was so out of it I faintly recall the pain; I just remember it was awful.

We eventually arrived at the hospital and they were able to get me back to their triage area right away.

Have I mentioned this was my very first hospital stay ANYWHERE? No? Well, it was, and I had no idea what to expect. And honestly I don’t remember a heck of a lot, except for receiving an IV. This was a pain in the ASS because anytime I needed to get up in order to use the room of restoration I had to holler for the nurse so she could do something to the IV. I then had to wheel that bitch with me. OH. ALSO! Those gowns they gave me were nothing more than a sheet with strings on it. I’m pretty sure every single person in that hospital saw my ass at one point.

Eventually the doctor approached me and–in broken English–said he wanted to run several tests to rule out appendicitis. They took blood and I was wheeled off to the ultrasound room. And that was an experience in itself! I have never, ahem, seen my body that way before. Like, the inside of it. Also, that could be taken very wrong so I’ll stop there. All you need to know is that it was concluded that it wasn’t my appendix. But more importantly, it was also concluded that I wasn’t pregnant. ;D 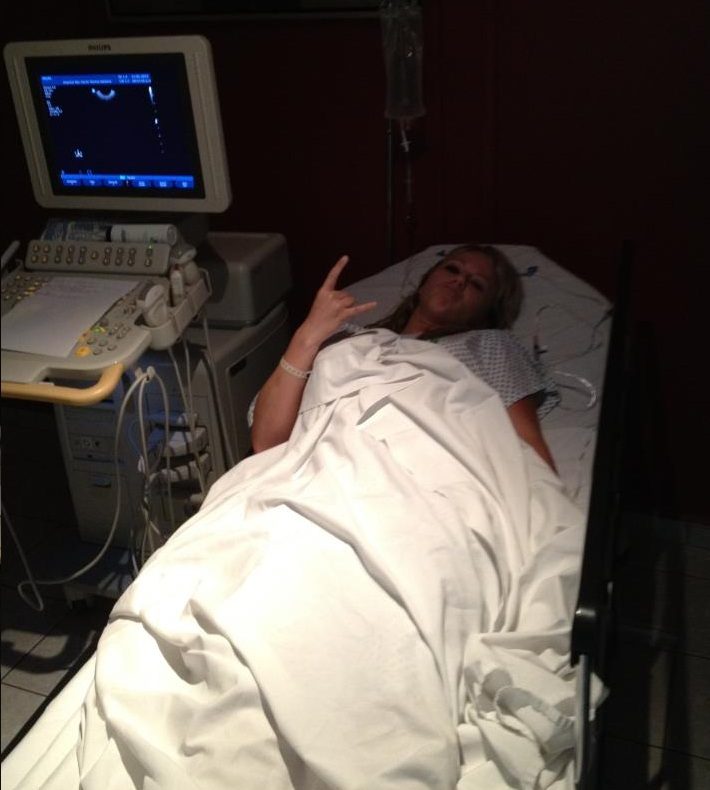 I was wheeled back into the triage room. The doctor was still waiting on the results of the blood test and, ahem, the results from another sort of test. About twenty minutes later the doctor approached me and relayed the message that some of the results came back and he believed it was a parasite. This is where it gets tricky, because A) I was completely out of it and barely remember the conversation and B) His English was broken. So, I want to say it was at this point he said he wanted me to be checked out by a gastrointestinal doctor before administering me any antibiotics. Well, that took another half an hour, but eventually I was checked out by this dude. After confirming the prior doctor’s conclusion that I wasn’t immediately dying, the antibiotics were administered.

A few minutes passed, and I think it was apparent I was still withering in pain, so the nurse approached me and asked, “Tienes dolor del estomago?” and I wanted to shout, “HELL YEAH my stomach hurts!” but it came out more of a muffled “Si” so it sounded like “Thi”. Anywho, she gave me this bomb pain killer in my IV and within minutes I felt about 80% better.

Unfortunately (as you’ll eventually read) this feeling of instant relief became my undoing. I thought I was legitimately feeling better. Oh boy, was I wrong. Little did I know, I had a LONG night and day ahead of me.