Admittedly I’m not one for large-scale warfare because I get waaay too twitchy and shoot everything and anything (which could be a good thing, but the objects I typically end up shooting are inanimate) but PlanetSide 2 on PS4? Yeah. I can get behind that.

THE WAIT IS OVER, BRETHERN! Well, not yet. PlanetSide 2 will be gracing the PS4 with its presence sometime before the end of this year. And rest easy knowing you’re not getting a stripped-down PC version. The team is sincerely dedicated to making sure these two platforms offer the same PlanetSide 2 experience. So, it’s not like a rad new weapon will be available on PC for six months before it makes its way to the PS4. In fact, the PS4 version has been graphically updated a bit and runs the game equivalent to the PC’s ultra settings. OoOoOh. (And, this goes without saying, but the game will absolutely remain free-to-play, meaning a PlayStation Plus membership will not be required.) 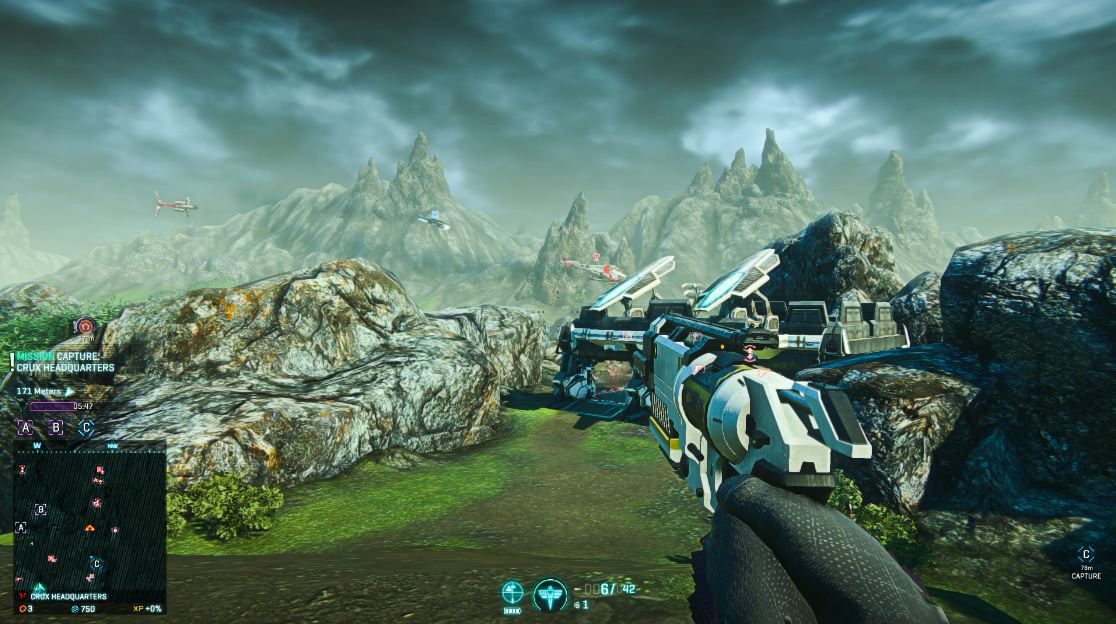 The only significant disconnect between the PC and PS4 versions are going to be the updates – and for this reason, PC and PS4 gamers won’t be able to play together. (They didn’t discredit the possibility of merging the two in the future, but noted it’s unlikely.) It’s much easier for the team to release updates to the PC version, but when it comes time for the PS4 build it’s basically out of their hands and up to Sony when they want to approve and release. So, patches and whatnot won’t be synced. Not a *huge* deal by any means, but one that prompted a few questions from other media outlets who were attending.

PlanetSide 2 will attempt to encourage people to join other players in squads and outfits by adding squad mentoring and leadership rewards. As just one example, squad leaders will receive ribbons whenever low-level characters in their lil’ ol’ gang level up. Basically, “If you’re successful, I’m successful.” Good for people who suck *cough* like yours truly *cough*.

Last but certainly not least, Battle Islands were touched on. These are new, smaller scale maps that players have been asking for. Think small(er) warfare, like 48×48. The team expressed interest in exploring different methods of gameplay using these islands, but other than that, nothing new and noteworthy was talked about.

So. Is PlanetSide 2 on your radar?