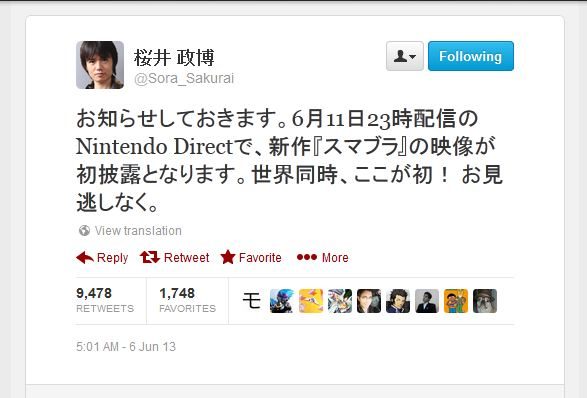 CAN YOU BELIEVE THAT TWEET? Adult hipster Link has been CONFIRMED for the next Smash Brothers!

Ahem. What that tweet really reads is: “Please take note: on the Nintendo Direct broadcast on June 11, we will be showing the first images of our new Smash Bros – simultaneously, worldwide, at the same time.” And in case you’re unsure who that handsome gentleman is, it’s Masahiro Sakurai, God of the Super Smash Bros. series.

So, you got that? Mark June 11th on your calendar and set your alarm for 7 am PDT (ouch).  IS YOUR BODY READY?

While I’ve never been a huge fan of fighting games, the Smash series has always felt different to me. Maybe it’s the familiar characters, the quirky items or even the level design, but something about those games hooks me harder than Link hooks a Hylian Loach in Ocarina of Time. (Although we all know it’s because I’m given the freedom to pause the game mid-battle and stare at Link’s manly bits for as long as I please. Don’t judge me.)

Are you excited for the new Smash? Do you think Namco can pull it off?