Once again Sony is allowing a group of people — by people I mean A) Regular Joes or B) Snuffed media who didn’t receive an invite — to wait in line for hours on end for a chance to gain admittance to Sony’s 2013 E3 Press Conference. Now, admittedly Sony has always had the best pre-conference shindigs. About two hours before the conference starts, a huge courtyard opens up that has food trucks parked around the perimeter and a bar serving alcohol right smack in the middle. Did I mention all of this is free?  (For the past few years I’ve always been a little tipsy at the conferences. BUT IT MAKES THEM THAT MUCH MORE ENTERTAINING.)

So, if you’re going to be in the LA area on June 10th and want to attend, here are the deets: 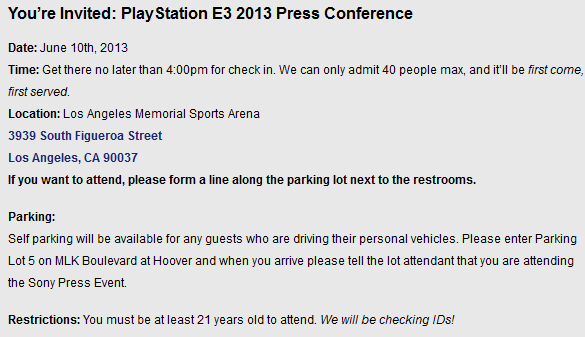 Ack, I can’t believe they’re only letting 40 people in. In the years past I too have been snuffed and have had to wait in line for several hours (I’ll say it again, it was worth it) but the limit caps were at least 100, 150. Thankfully I managed to finagle an invite, so this will be the first time in four years I can just waltz right in, but let me bestow some obvious, albeit legit, advice upon ye if you plan to play the line-waiting game.