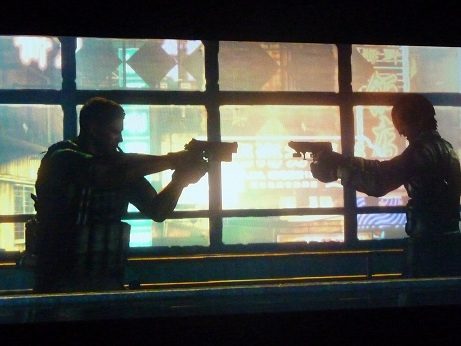 Déjà vu much? That’s because this is the SECOND time I have seen this iconic scene of Chris and Leon pointing their shiny objects at each other (HEY-O!) and, sadly, they failed to remove their shirts and have a six-pack competition this round as well. Sigh. Anywho, Leon tried to talk Chris into not killing Ada and Chris surprisingly obeyed. I’m not sure if this is totally accurate, but I think their parting words were like, “Yo, Chris bro. I need to tap this later, so can you not shoot her in the face? I’d appreciate it.” “But Leon, she killed most of my men.” “I know, man, I’m sorry. I just need to get laid. I’d hit Helena’s ass if I could, but there’s something wrong with her vagina. Just wait until you see her crawling around.” “Okay, fine. You go after Simmons and I’ll pursue Ada.” “Aight brah. Deuces.”

Well, pursuing Ada was a clusterfuck. You see, my friends, any time I have to operate a motor vehicle in-game I just SUCK at it — I don’t like using the brakes and I don’t like taking corners carefully. I know what you’re thinking, and don’t worry, I’m a fantastic IRL driver. (If I get in a car accident anytime soon I’m going to chalk it up to a terrible jinx.)

Ada’s chase eventually led us to an aircraft carrier, where we had to destroy cruise missiles that were pumped full of the good stuff — and by the “good stuff” I mean the C-Virus. But, um, when we finally confronted Ada she was assassinated. Whaaat? I mean, I know from Leon’s campaign Chris relayed to Leon that she was dead (even though we’d later find out she wasn’t) and now I see why. Ada’s “assassination” wasn’t a gentle one– that bitch ate shit HARD. I mean, she was shot off of a building and landed a million feet below on cement.

But the sad, unfortunate thing is that Chris and Piers weren’t able to destroy ALL of the C-Virus missiles — oh no — the only they WEREN’T able to destroy was the one heading right for Leon and Helena in Lanshiang.

And it hit Lanshiang so hard.

After breaking the news to Leon about the “death” of Ada, Chris and Piers headed underground to save Jake and Sherry.

Managed to save them, they did. So, let me ask you — how do you think this little reunion between Chris and Jake went? Do you think Chris and Jake became besties and forgot about all of that tension that had built up in the past? Well, in his meathead mind, Chris decided it would be best if he told Jake that he was the one who killed his father. Um, yeah. Smart move broseph. 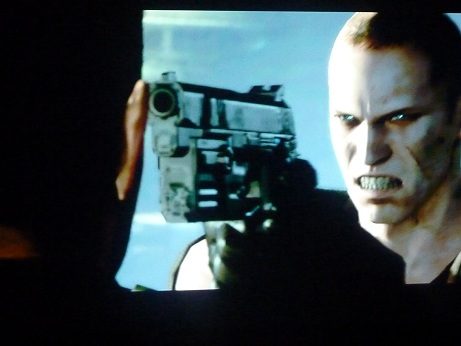 However, Jake decided to not blow Chris’ head off, so he grazed his cheek with a nice hot bullet instead. Nicely done, Jake. Great control there. Everyone said their civil goodbyes (as you can imagine) and went their separate ways. Well that’s all great and all except for this one thing — this massive as BoW with the FREAKIEST eyeballs I have ever seen decided to make an appearance and attack Piers and Chris. 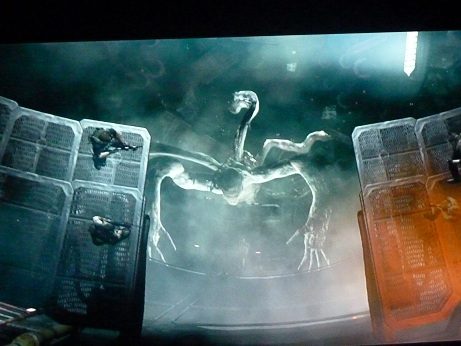 Okay, remember what I said earlier about the size of these BoW’s in the last post? “Also, Capcom, WTF? Like, these monster-motherfuckers you come up with keep getting bigger and bigger as the series progresses. I’m scared to see the size of these bad boys by the time Resident Evil 12 comes out. If these Monsterfaces continue to thrive, they’re going to be the size of a freakin’ continent.”

Yeah. Scary-Eyed-Fucker above (aka known as the Haos in-game) totally takes the cake. Ew. That was probably the first Capcom created fuckshits that legitimately freaked me out.

And because Capcom likes to keep things warm and fuzzy, Piers ended up getting heavily wounded by this Scary-Eyed-Fucker. So wounded, in fact, that the only solution he could think of was to inject himself with a vial of the C-Virus that happened to be conveniently lying on the ground in front of him. After injecting himself he was able to temporarily defeat the Haos, which is great, but um my studly Piers now looked like this: 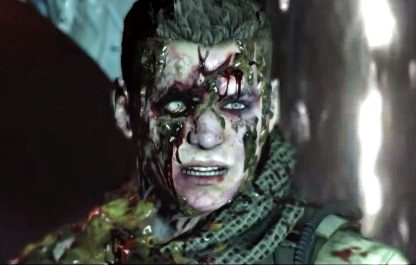 I mean, I’d still hit it, no question. But it kinda puts a damper on things. Although it’s not like I’d have a choice anyway because Piers sacrificed himself for the safety and well-being of Chris Redfield by shoving Mr. Meathead into an escape pod as he stayed behind, ensuring the destruction of the Neo-Umbrella base. GOOD FOR YOU, PIERS! You managed to keep true to the Capcom curse that is specifically catered to me — every non-starring male role I develop psuedo-feelings for ends up biting the dust. I won’t name the others for spoilers sake, but just you know you joined their ranks.

Aaaaand per the norm, Chris’ campaign consisted of a minute-long ending cutscene that hints he’s still serving with the BSAA.

But not all is lost! In fact, it is all won! For I just found out Piers’ face was based off of an actor named Adam Crosman — check him out on Twitter! 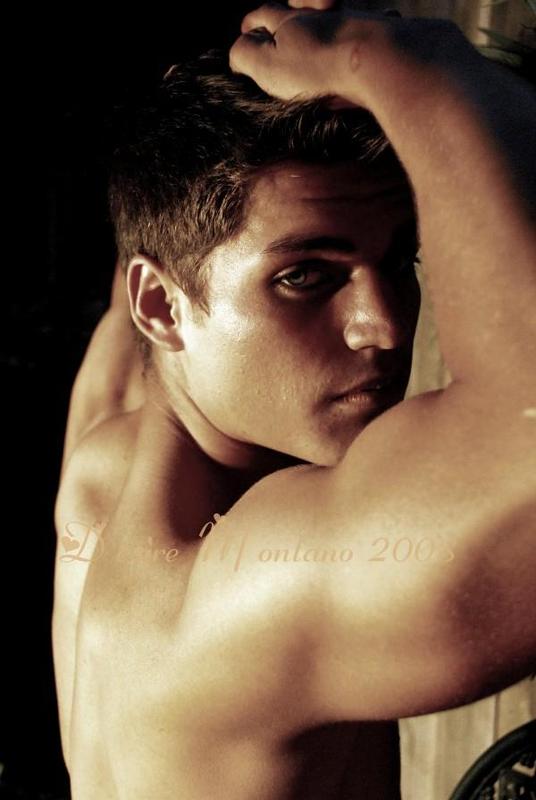