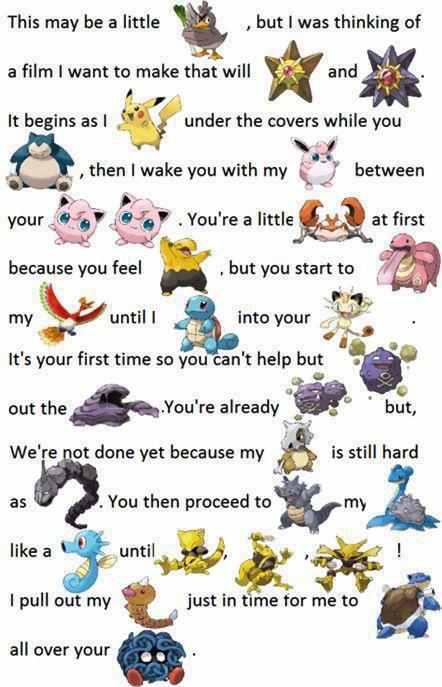 BAHAHAHAHAHA. I just read this out loud for the, like, twelfth time in a row and it causes me to have the funnies EVERY. TIME. Oh, man. I’m so glad I stopped mentally maturing after the age of eight — life is so much more enjoyable. “Until Abra, Kadabara, Alakazam! I pull out my Weedle…” Bwahahahaha. Okay. Ahem. Time for composure.

Yesterday I wanted to write up a brief Pokémon blog, during which I planned to whine, bitch and complain about Nintendo’s failure to bring us a console Pokémon title since — in my eyes, anyway — Pokémon Snap. (Sorry, the Stadium games just didn’t do it for me.) Anyway, I was going to go on this tirade because one buzzed night last weekend I found out Nintendo had a “big” Pokémon announcement slated for today. So, I did what any slightly buzzed gamer would do. I went to Facebook.

Obviously, don’t feel obligated to read all of the responses, but there’s some good conversation in there! Scratch the mention of my virginity, that is, thanks to my dear friend Ryan.

I never got around to my bitchfest post, but eh, whatever. Like Peer said above, it’s obvious that they Japanese Nintendo team considers Pokémon to be a handheld shindig — clearly — so I just need to put on my big girl pants and accept that! (Although, let’s be honest, I never will. I WILL GO TO MY GRAVE WANTING A CONSOLE POKEMON TITLE!) And it’s not like I have anything against handheld gaming — you could say I just don’t get along with it. Hell, I couldn’t even finish one of my all-time favorite games, Final Fantasy IX, on my PSP because I dislike having to play on such a small compact handheld device manbearpig. I prefer to do my gaming slouched into a couch, controller in hand, head straight and a TV in front of me. (Bonus points if a plate of hot wings is at my side!)

But in any case, I must admit the newly announced Pokémon X and Pokémon Y are looking preeeetty bitchin’, and this just might, MIGHT convince me to purchase a 3DS XL.

Okay, forget what I said above. After watching this trailer again, I’m sold. Maybe by the time October rolls around I’ll feel handheld-deprived and ready to give handheld gaming another shot.

(Also, the end of the above sentence totally looks like an algebra problem.)