Oh, how I thought I was done writing about Target. In the end, they put out…er, I mean, they upheld their end of the bargain by sending me the Mass Effect 3 Collector’s Edition for the Xbox 360. ::cue golf clap::

However, they provided quite a bit of blog fodder:

I have the CE version of ME3 pre-ordered! I think.

So, yeah, I thought after I received my game everything was hunky-dory and I could move on with my life. That is until I received the following email this morning: 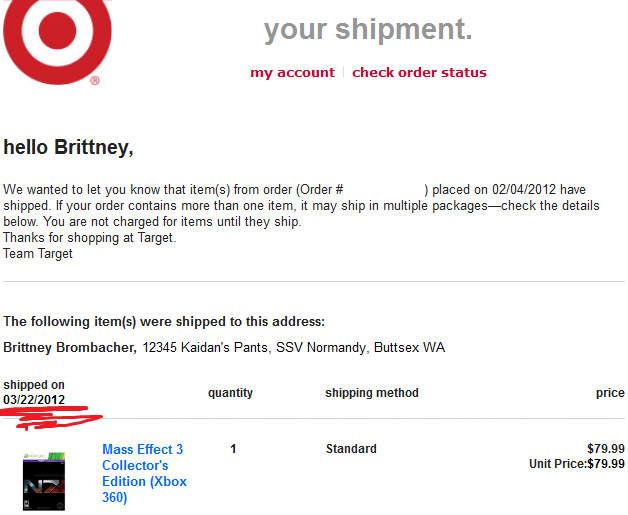 Soooo am I be just being sent a confirmation email that my item shipped? Even though I received the package six days ago? I mean, I have it. I already have Mass Effect 3. So, like, yeah. What are they sending?

HAHAHAHAHA! I probably should call Target to see what’s going on, but instead I think I’ll let this play out. If I don’t receive anything I’ll just chalk it up to be an error on their part or something. After all, I never received a confirmation email before ME3 was delivered.