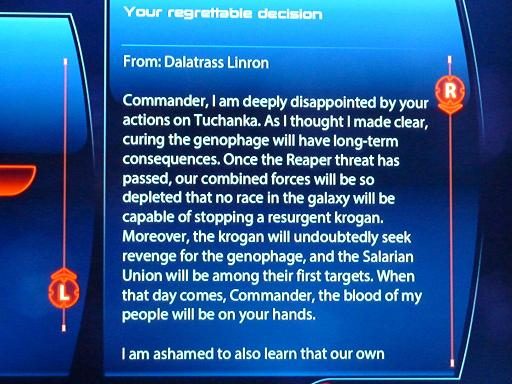 As expected, Mr. Dalatrass wasn’t very happy about Mordin sacrificing himself for the krogan. But I think he’s going about it the wrong way! I’m sure the krogran will take into consideration that it was a salarian scientist who not only cured the genophage, but sacrificed himself to do it. Therefore they won’t, you know, try to slaughter the entire salarian race. I think things will be peachy as long as Wrex is in charge.  But from what I’ve heard, Wreav isn’t such a peach. I don’t know if I’ve actually come across him yet… 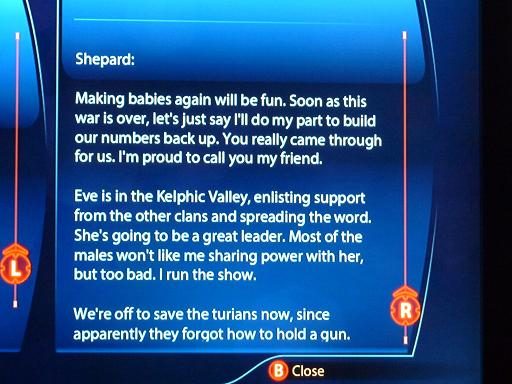 Speaking of Wrex, I love his first line in this email: “Making babies again will be fun.” Yes it will Wrex, yes it will. Just like, don’t overdo it. Poor females. And—potentially—poor universe! 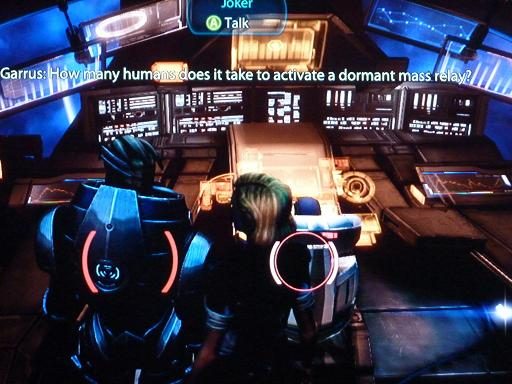 I was aimlessly wandering around the Normandy post-mission to see what was going on (like I normally do) and I was rewarded so hard. You see, I practically live for character interaction (which is why I’m so obsessed with Bioware games) so when I ran into Garrus and Joker exchanging, ahem, racist jokes on the Normandy I squee’d like a lunatic fangirl. If I hadn’t walked in, I never would have seen this—it’s something Bioware threw in just because they’re awesome. I later saw Garrus and James talking smack as well. 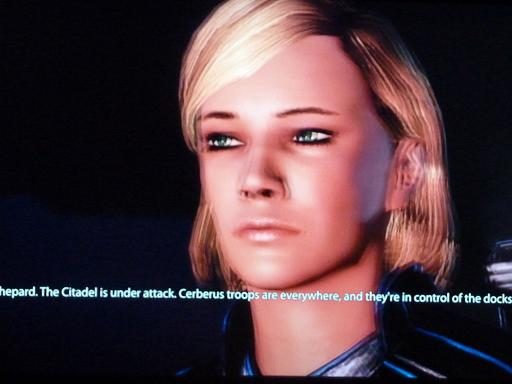 I was getting ready to land on the Citadel, with no intention of diving into a mandatory mission (I had some post-mission wandering to do!) wheeeen I was informed by Thane via com that the Citadel was under attack by Cerberus. Ooooof course it was. So I threw on my hero armor and got ready to pwn a noob—which I did. I pwn’d many a noobs. Unfortunately I also found Commander Bailey injured. Now, I like Bailey’s character, so seeing him hurt made me hurt. :/

Okay, not really. That last sentence was for a dramatic effect. 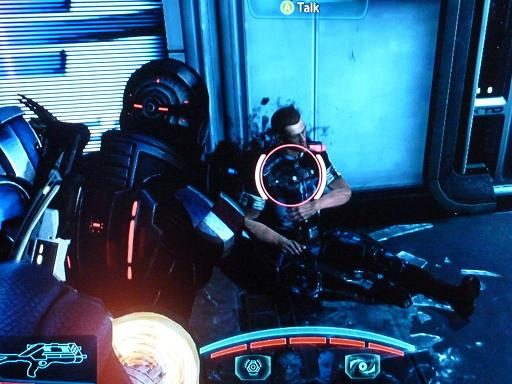 I continued on. I can’t quite remember why, but I know Cerberus already murdered the executor. Whatever his role was. I don’t freakin’ know these things. Anyway, Udina was behind all of this and he was trying to sell the Council out so Cerberus could take over the Citadel. The other members of the council had no clue, however, and Udina was still with them—being guarded by Kaidan. (WHO I HADN’T SEEN IN FOR-FREAKING-EVER!) I eventually found The Dalatrass by himself (who had originally told me Udina was bad-news-bears) and he was about to get his salarian ass kicked by this ninja-assasin dude I’d never met. BUT Thane showed up just in time (that sneaky drell) and was able to distract the assassin and cause him to flee—not before he stabbed Thane. 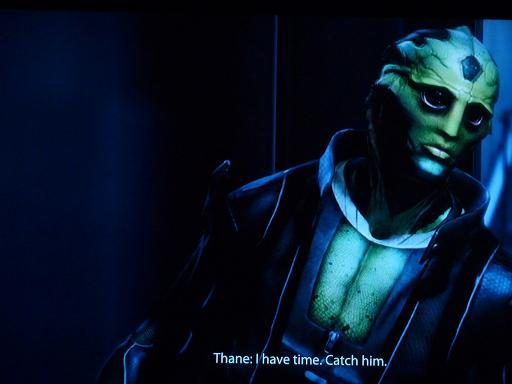 Thanks, dude. THANKS BIOWARE. You’re just dropping my favorite characters left and right, you bastards.

I ultimately caught up with Kaidan and the rest of the Council. I drew my gun on Udina, and Kaidan drew his on me. I totally understand it looked bad, but really, Kaidan? You bastard. THIS IS HOW YOU GREET ME AFTER MANY LONELY NIGHTS ON THE NORMANDY. 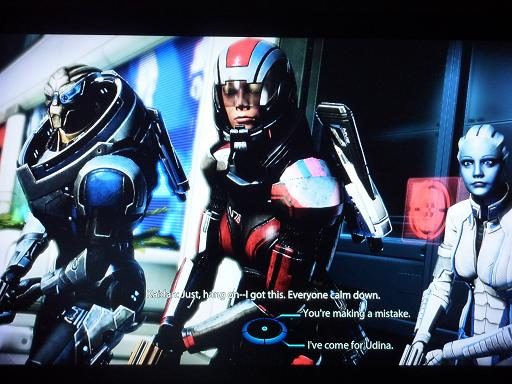 I was finally able to convince Kaidan that Udina was the bad dude. But it didn’t take much convincing after Udina ran for one of the futuristic car shuttle things on the Citadel and tried to peace out while waving a gun around. Yeaaaah. I then had the renegade option to kill Udina, but I decided to let Kaidan do it. After all, he needs some brownie points. Freakin’ drawing a gun on me…psssh…. 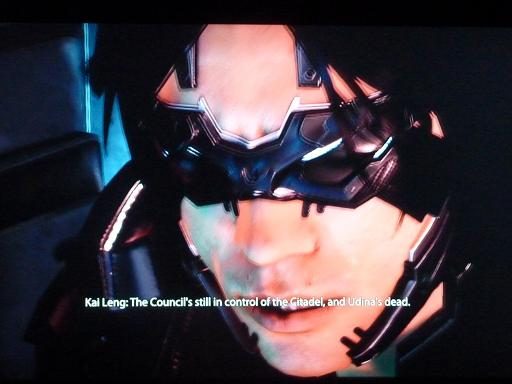 I was then given freedom to wander the Citadel. Thank God, because I had a butt-load of missions to turn in. HOWEVER. How-freaking-ever, my first stop was the hospital, where I had to say goodbye to Thane. BAAAAAAAAAAAAAAAAH!!!!!!!! At least I was able to say “Ohai” to Kolyat, Thane’s son, who I hadn’t seen since Mass Effect 2. Kolyat came to donate blood to Thane, but apparently it wasn’t going to do any good. We read a prayer together aaaand…Thane died. WTFBBQ. 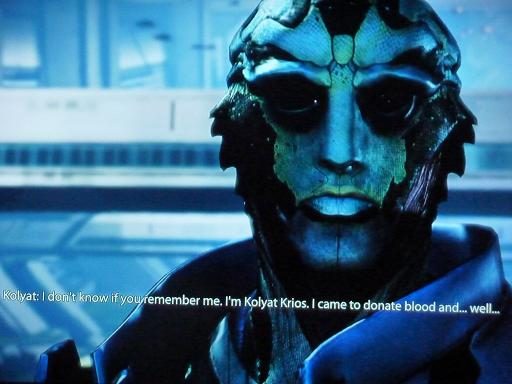 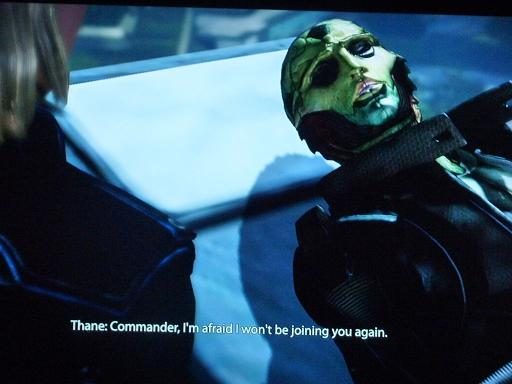