Last month I gave away a copy of Brink to a good ol’ chap named Dennis, and for whatever reason he felt compelled to send me something in return.  Now, before I proceed any further I’d like to show you to see the lovely array of characters who, uh, “guard” my second monitor:

Now, the Link action figure I’ve had since Ocarina of Time released. I bought Inuyasha a few years ago in SF, Piccolo at this year’s Emerald City Comicon and the army men came from Gameworks. Trunks is the most recent addition to my monitor mob, and I *just* bought him a few days ago.

Okay, so yesterday I received  a nice note from Dennis accompanied with a bundled figure wrapped in newspaper. And after unwrapping said bundle I have two words. They are “fuck” and “yes”.

In fact, it looks a LOT like another thing I own. Here. I’ll put them side-by-side so you can see exactly what I’m talking about. 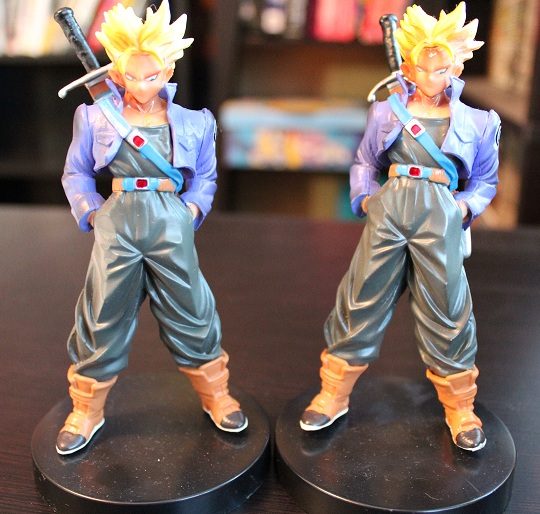 YESSSSSSSSSS. I NOW HAVE TWIN TRUNKS. Actually, I now have three Trunks action figures but, errrr, the third one is kind of on the homely side…

But can life possibly get any better? Now I just need to wait until BioWare launches the second series of Dragon Age action figures so I can buy at least twelve Alistairs. <3.