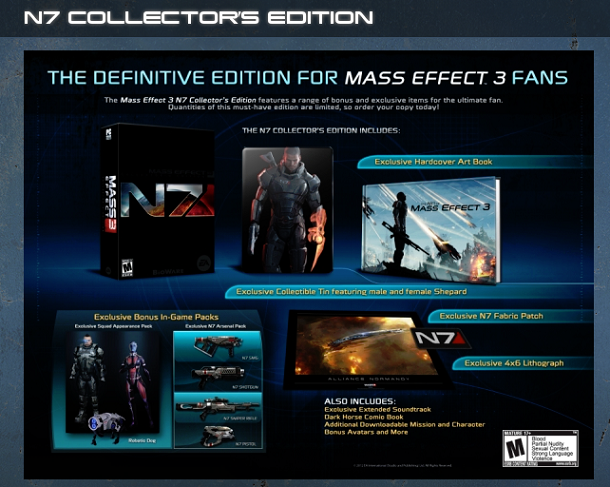 Y’know, for being the self-proclaimed collector’s edition hoarder of all things videogame I really almost screwed the pooch. I’m not sure why I waited so long to try and get the ball rolling with a Mass Effect 3 CE pre-order (you’re talking about the chick who pre-ordered Skyrim, like, four months in advance) but after my buddy told me GameStop was *this* close to selling out of CEs you KNOW my ass was in the next GameStop I could find. In fact, I don’t think I was even halfway through GameStop’s entrance before I blurted out I wanted to pre-order the Mass Effect 3 collector’s edition.

The clerk, without even looking up from his computer, said “Well, that’s going to depend on which platform you want it for.” And right then and there I knew I was screwed. I muttered, “Xbox 360” and the clerk shot me a sympathetic grin.

“Yep, all GameStops are sold out.”

Before I could say another thing he added, “And although Amazon says they still have them in stock, they’re probably lying. You’ll receive an e-mail from them the day before it releases saying you’re stuck with a standard edition.” Another employee nodded in agreement. But he then told me he had a list with two other people on it that also wanted to pre-order the 360 CE version of ME3. This list would guarantee any extra CE, should GameStop receive them, to those people and he said he’d be more than happy to add my name to it.

Uh oh. I haven’t had great experiences with GameStop and their “lists” in the past. Remember what happened with Skyrim? Mmmhmmm. I’ve learned my lesson, GameStop! I’m not falling for your tomfoolery another time!

….so I added my name to his stupid list and put five dollars on the standard edition game and the CE guide. BUT ONLY FIVE DOLLARS. That way I was at least giving myself a chance to receive the CE, and hopefully I’ll receive the CE guide this time. (I’m going to the midnight release, so there shouldn’t be an issue.)

I smiled, thanked him and left. But my hunt was not over.

My first plan of action was to stalk every Best Buy within a 60 mile radius. And I did. But not only were they sold out in stores, they were completely sold out online. So, I pondered. Eventually my ponderation sent me to Target.com, where ZOMG, THE COLLECTOR’S EDITION OF MASS EFFECT 3 FOR XBOX 360 WAS STILL AVAILABLE FOR PRE-ORDER!!111

Upon seeing this, I did what any reasonable person would do. I spent a total of $96 and purchased it.

(It better not be too good to be true. Honestly, until the CE is in my hands I’ll be a little skeptical.)

Anyway, so here’s the new…issue. I won’t get the CE (should it even arrive) until the following Friday or Monday because it has to, you know, ship to my address. And that’s no good. Therefore I am going to keep my GameStop pre-order so I will at least get the exclusive GameStop bonuses AND a copy of the game on launch day. And who knows? Maybe I’ll get lucky and they will have another CE available for me. Which would mean I could potentially will end up with two CE of ME3, but seeing as I have four or five copies of Dragon Age: Origins this isn’t anything new.

I think…I think I have issues. Awesome issues. ;)