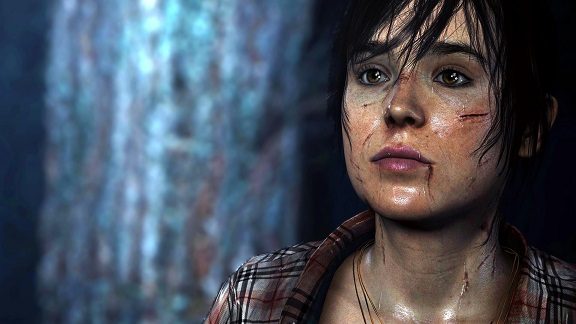 HEY YOU! Yeah, you. Have you ever played Heavy Rain before? You have? Okay, then you’ll be able to pick up and play Beyond: Two Souls like…uh, well let’s just say it’ll be like riding a bike.

If you haven’t played Heavy Rain, you’re in for quite a gameplay shock — I don’t mean that in a bad way, but if you’re expecting a “HOLY BALLS ACTION ACTION ACTION BUTTON MASH THIS AND RUN THIS WAY DO A BARREL ROLL!” That’s uh, not what you’re going to get. Think of as a game full of quicktime events. You maintain control of which direction your character walks/runs in, but all of your actions will be performed via button prompts. (For the record, this game is still intense as HELL. I remember chuckling to myself because my heart was beating so damn fast.)

So, the whole gist of this game is you control Jodie, a troubled girl who has this, like, ghost presence thing named Aiden constantly with her. This paves the way for interesting gameplay mechanics, like switching between the perspective of Jody and Aiden on the fly. One of the first encounters I had with this took place early in the demo. Jodie, as a young child, is being “studied” at a hospital of sorts. The doctors placed Jodie in one room, and an adult woman in an adjacent room. Both had four or five identical cards. The woman would choose a card at random and the doctors would instruct Jodie, in the other room, to choose the same card. Y’know, to test that “telepathy” and all that.

At that time I assumed the role of Aidan, and remember, Aidan is like, a presence. A wisp. So, I was able to leave Jodie’s side, float through the separating wall and voyeur on the woman. I took a peek at the card she was holding, then with the press of a button, re-assumed control over Jodie. I then picked the correct card. Get it? Good.

For some reason or another Quantic Dream decided to have an EXTREMELY long demo, and about 23 minutes in I felt insanely terrible for the small crowd gathering behind me and called it quits. But what I took away was that this is essentially Heavy Rain 2.0 with a new story, improved graphics and an interesting gameplay mechanic.