Hey guys!  My buddy Tony (AKA Boots) is about to pop his Dragon Age: Origins cherry and has graciously volunteered to keep a guest game log. This will work similar to the logs I keep, but you know I need to add in my own snarky remarks in red ;) 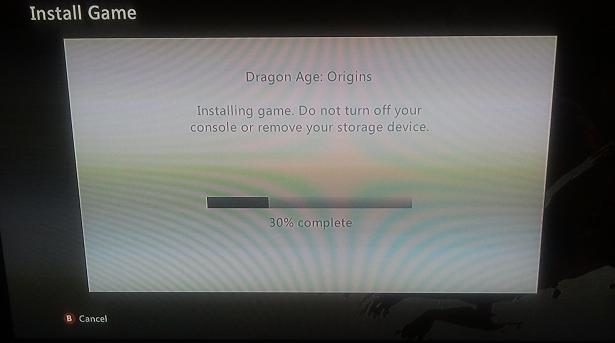 I bet Britt is so jealous right now

I have a confession to make. I never intended to play this game.

[Tony, I used to think you were cool.]

Right now, I can just imagine Britt reading that last sentence and falling into a choking fit like she just ate some honey greek yogurt. I’m sure the taste in her mouth from my statement is quite similar.

[Oh, the infamous greek yogurt incident. If you haven’t heard that clusterfuck—aka the battle between myself and a spoonful of greek yogurt—you can check it out here (skip to 1:05). Tony’s comment will make total sense, I promise. Because there really is no better way to put it!]

Perhaps I should clarify. You see, I have this thing about fantasy/medieval settings. They don’t hook me very well. It’s weird cuz I like magic, I like swords, and I definitely love dragons… but somehow, I just couldn’t seem to get into these things. Lord of the Rings? Meh. Braveheart? No interest. Harry Potter? Well, that’s set in current times, but it has enough of a fantasy feel to it that I just kinda said “No need to see this,” and moved on my merry way.

[Again, Tony, I used to think you were cool. What do you mean, fantasy settings don’t “hook” you?! Have you ever felt the comforting weight of a Morning Star or Mace in your hand? My guess is no. But in your defense I have yet to watch Lord of the Rings, Braveheart, or half of the Harry Potter films and, unlike you, I am a complete nutcase for medieval/fantasy lore. So I think that automatically makes me somewhat of a loser.]

Lo and behold, Best Buy recently had a deal where Dragon Age II was $9.99. At that price, I’ll buy just about any game that I have a butthair of interest in, so I ordered it and set it for store pick-up. Walking on the way to the store that day, I got into an exchange with the Blonde Nerd herself on Gchat. The following is an excerpt of our conversation:

[HAHA, first of all, props for usage of the word “butthair”. Second, I remember this conversation. It always makes me laugh when folks ask if they should play Dragon Age: Orgins (AKA Dragon Age 1) or Dragon Age 2 (AKA Dragon Age 2 :P) first. In my opinion—and I’m going to try my hardest not to go on an epic tangent here—Dragon Age 2 doesn’t even exist on the same PLANET–no, UNIVERSE as DA:Origins.  I think 90% of the enjoyment I got out of Dragon Age 2 was because I had played DA:Origins and studied that friggen’ game from the inside-out— ::covers mouth in a feeble attempt to stop any more Dragon Age ranting::]

Now, those of us that frequent Britt’s amazing blog know that she’s purchased no less than 28 copies of the game and has finished it at least double that amount. In fact, she loves it so much, I’m sure that she could probably describe Alistair to a sketch artist and get the smuttiest picture of a digital man ever created. None of that’s important, of course. I merely use it to show our differing level of fandom for the game in question. Of course, in an effort to avoid being scolded, I decided that I should pick Origins up and play it before I started the second game. I found one at Gamestop for cheap and I had to let Britt know. You may have seen her reaction.

[Whaddya mean, “none of that’s important,”MR ZUNIGAGAGA?! I pride myself on knowing every…single…inch of Alistair’s body.

…and that’s how this came to be. She wants to live vicariously through my playthrough of this game, and who am I to deny her of the experience? As a Dragon Age virgin, I’m sure she can’t wait to watch me pop my cherry as I begin to play. If anything, I’m sure she values the time it’ll save her from playing to allow her to focus on more important things, like hot wings. Either way, I hope that my experiences entertain and give Britt the Dragon Age-satisfaction she so desires.

[Damn, you know me well! Hot wings are the elixir of life. And you can friggen’ quote me on that.

But seriously, I am very excited to follow Tony’s adventures as he travels across Ferelden. Who will he kill? Who will he have awkward tent-sex with? And when it comes time to make that last minute decision about that enemy, what will he choose? GAH! It’s all so exciting to me.

Now Tony, I believe it is time to decide whether or not you want to be a male or a female, and which race you want to venture as. Last I heard you still hadn’t made a decision! ;) ]