I’m trying so hard not to squee all over this post. I’m going to grab a hold of every fiber in my being and keep this post, serious, legitimate and OH MY FUCKING GOD IT’S THE DRAGON AGE: INQUISITION TRAILER!!!1111dkfjdkla

The teaser trailer you see above was unveiled during yesterday’s EA 2013 E3 press conference, and you better believe my gaping-mouthed ass was in the 7th row with eyes-wide and pants wet.  I’ve watched this trailer four or five times now, but the second time I watched it it was like watching it for the first time. I DIDN’T REMEMBER ANYTHING. Yes, I really was that star-struck. 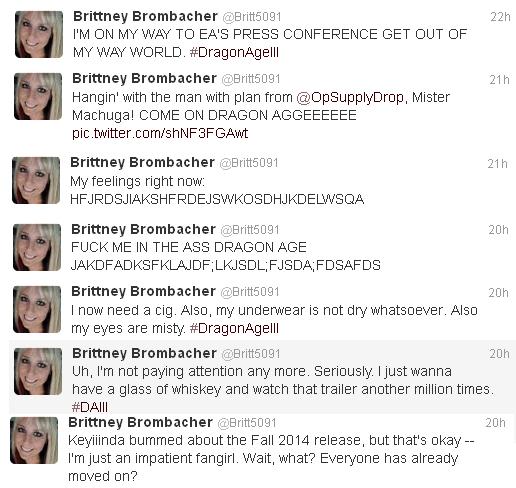 Allow me to bestow a sincere apology to the people in front of me for screaming like a madwoman during the unveil, also, every time Dragon Age was mentioned. If you find me I’ll donate 10 cents towards your future hearing aid.

Alright, let’s get to it. First, here’s the summary on Dragon Age: Inquisition’s website:

Explore a vast, fantasy world at the brink of catastrophe in Dragon Age™: Inquisition, a next-generation action RPG, where your choices shape and drive the experience. In this upcoming video game from BioWare, makers of Mass Effect 3 and Dragon Age: Origins, you’ll make your mark in an expansive, story-driven open world filled with complex characters, challenging combat and difficult decisions.

A cataclysmic event has plunged the land of Thedas into turmoil. Dragons now darken the sky, casting a shadow of terror over a once-peaceful kingdom. Mages have broken into an all-out war against the oppressive Templars. Nations rise against one another. It falls to you to restore order as you lead the Inquisition and hunt down the agents of chaos – your choices will forever change the Dragon Age.

My brain is going 90 MPH — I’ll do my best to transcribe my thoughts into (semi) coherent paragraphs below:

I don’t want to over analyze things (which will, let’s face it, happen anyway) so I’ll leave it at that for now. Let me know what you thought of the trailer, and where you think the story will head in Dragon Age: Inquisition!