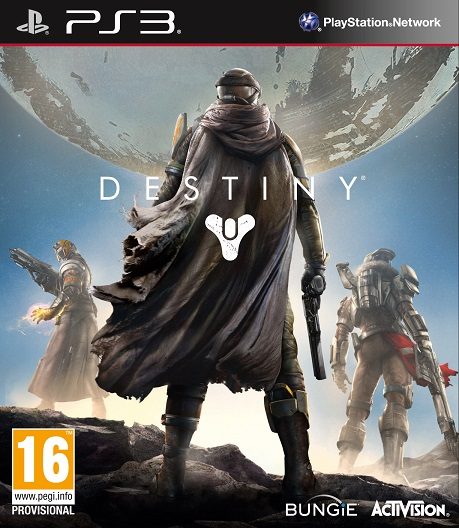 It’s a slooooow news day, so enjoy some newly-revealed Destiny box art. If you’d like to see the box art plastered in the style of your favorite current or next-gen console, you can check out Destructoid’s launch gallery. Y’know, just in case the PS3 art doesn’t do it for you.

Guys, I’m on a mission. I’ve mentioned this a few times on my blog, but several years back while in the small town of Winthrop I ran across a Bungie employee. Now, this was when the Bungie/Activision multiplatform deal was just announced, so there wasn’t a lot information out there. But nonetheless I prodded as much as I could and asked him how he felt re: the new deal, new ventures beyond Halo, yadda yadda yadda. But the most IMPORTANT aspect of the story is this: the man’s t-shirt  had a weird shape on the front which I can only attest to looking like the shocker. Yes, that shocker.  (If you don’t know what the shocker is you could Google it, but be prepared for likely NSFW imagery.) Sadly I didn’t snap the photo of the guy’s shirt before parting ways — this was way before BlondeNerd.com was a thing and before I was comfortable being obnoxious and asking for photos with random strangers.

Anyway, many years after that encounter we now know “official” logo looks like this:

It doesn’t look much like, uh, that aforementioned sexual gesture, does it? I essentially wrote off my shocker theory and coughed whatever it is I saw to being some old concept of a design that no longer exists.

During PAX Prime last month I SAW SOME DUDE ROCKING THAT SAME EXACT SHOCKER-ESQUE LOGO ON HIS SHIRT. IT LIVES! Unfortunately he was friggen’ going down the elevator as I was friggen’ going up so getting his attention was impossible, but believe me, if I coulda I totally woulda.

Therefore my mission is this: Find a Destiny-shocker-esque t-shirt and take a picture of it. Then — and only then — will my life be complete.