Holy Alistair nuts on an oak branch, its been a crazy couple ‘o days!

I had the extreme privilege of turning a year older on Monday (weee) and Tuesday was spent recording a podcast and visiting the nerdier side of my family (ie; my gaming grandmother and my WoW-addicted aunt whom I love very much) AND yesterday…well, yesterday and Thursday was a day all of its own.

But alas, today is a new day and I have TONS of shit to show you guys! It has been excruciating not being able to update BlondeNerd with my shenanigans, so it feels balls-awesome to be back and writing dorky, nerdy, geeky and otherwise perverted things mostly about fictional videogame characters.

So, yeah, like I said earlier my mom popped me out 24 years ago as of this past Monday. To celebrate I was treated to a weekend in Leavenworth.

Leavenworth is a cute little Bavarian town, meaning everything is all cutesy and German-y – seriously, it’s so adorable that I usually make the three or so hour drive over there a few times a year. Anyway, the last time I was in Leavenworth snow had blanketed the entire town (it looked like Zelda: MM’s Snowhead) but this time it was BEAUTIFUL and warm. And by warm I mean it was around 75 degrees. That’s actually borderline hot for us Washington folk.

We didn’t arrive in Leavenworth until 11:30 pm (I had to work), but it had been communicated with the hotel staff that a crew of folk would be coming in late. The hotel staff said that was totally okay– they would forward their phones to their personal lines and we could just call when we got to the hotel and they’d be there in a matter of minutes. PEACHY!

Well, of course when we called no one arrived. In fact, no one answered their freakin’ phone. We must have called at least 12 times to no avail. The thing about Leavenworth is that the entire town basically shuts down by 9 pm (sans the one or two bars) so there was NO one out we could ask for more information, talk to, etc. BUT NEVER FEAR! We knew we had options. We could rough it and sleep in the car for a night (which, admittedly, would have been awesome) OR drive around at midnight looking for another Hotel.

We went with the latter.

We found a hotel and waited inside for the receptionist, only to be told that they were COMPLETELY booked. Not a good sign. By this time it was nearing 12:30 and we were getting a LITTLE nervous, but thankfully we were able to find a hotel with a vacant room (as in just one — turns out there was some popular bird watching festival that weekend). As we were walking back outside to move the car closer to the room we heard this whiny bleating coming from across the street near a golf course.

THERE WAS A FREAKIN GOAT ON THE SIDE OF THE ROAD!!! If you don’t know by now, thanks to Harvest Moon I completely and UTTERLY love farm animals. Seriously. I’m obsessed with them. We dropped everything and ran across the street to play with Mr. Goat.

As it turns out there’s only so much entertainment a goat can provide, so shortly after we headed to our room and proceeded to drink beer and SNES Jurassic Park. I don’t know if I’ve told you this, but as of late my Super Nintendo travels with me wherever I go.

The next morning we were able to contact the hotel we were SUPPOSED to stay at the night before. Of course they didn’t know what had happened – in fact, they were rather accusatory at first.

“Where were you?”
“The phones WERE forwarded all night!”
“POOP SPEWING FROM MY MOOOOOUTH!!!”

Ultimately we got the night refunded and were granted a complimentary bottle of champagne and some of THE most delicious chocolates I’ve ever tasted in my entire life. But I’ll skip talking about the rest of the weekend and will get down to what you REALLY want to read about.

Like I said, the SNES comes with me wherever I go. I recently started playing a Link to the Past (although as of this time I haven’t created a log for it yet) and after a long day of fishing, eating, wine tasting and other frivolous activities it was time to settle down with some goddamn’ Zelda.

Unfortunately the beds were kinda inconvenient relative to the position of the television, so we did what any good ol’ nerds would do — we removed the mattresses and placed them on the floor directly in front of the television. Normally we’d move the entire bed, but these beds were HUGE and moving them would require much more manpower than we had at our disposal. 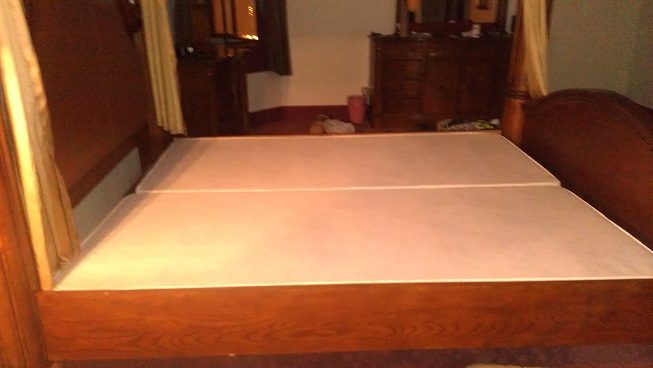 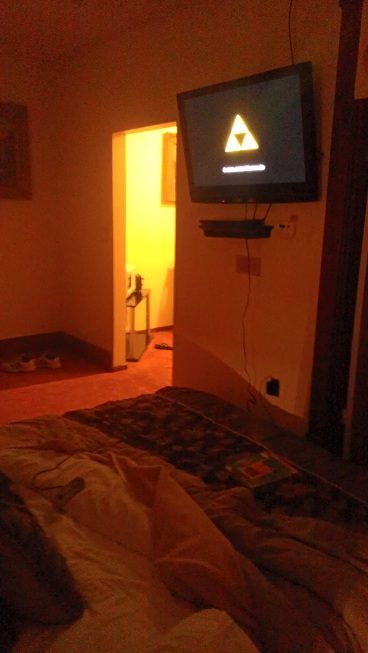 I also received some awesome “gifts”…look for those posts coming up today and early next week!