So, I’m sure a few of you have heard of my Woman Cave 2.0 project. If you haven’t, and are new to this fun play on the female anatomy, let me learn you: You see, I’ve been hoarding gaming paraphernelia (ARE YOU HAPPY I CONSTANTLY AM USING THE TERM “HOARDING”, YOU GUYS? YOU KNOW WHO YOU ACCUSERS ARE) ever since I was in elementary school. When I moved to my first, IRL grown-up apartment by myself yours truly utilized the office space as an area to finally unbox everything and put it on display for eyeballs to peer at.  Thus the Woman Cave was born.

I was there for a few years before deciding moving downtown, which meant everything needed to be boxed up, yadda yadda, and now I find myself in a smaller two-bedroom apartment, whiiiich means the office area is a bit smaller than what I’m used to. (Thanks downtown living!) But in any case, the Woman Cave 2.0 is finally being erected. (Huhuhhuhuh. Erected.)

As you can tell I still have quite a bit of space to fill AND DON’T WORRY I WON’T HAVE ANY PROBLEMS DOING THAT. It’s a matter of getting it done at this point, which is a thing I probably should be doing instead of writing this blog post. But I digress. 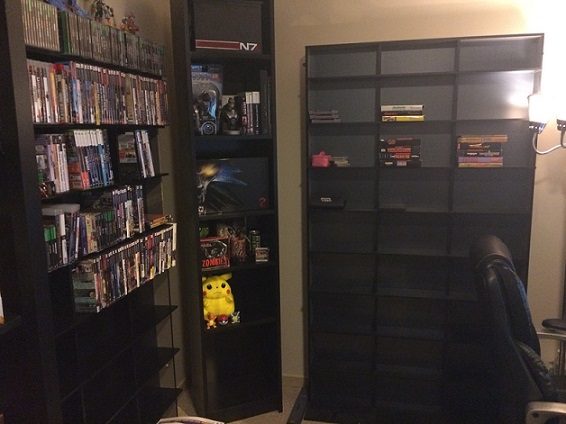 One of the biggest problems I faced with my last Woman Cave was running out of room for my games. The original shelf, pictured on the right, was maxed out in a matter of months which meant I had to buy several more shelves in order to accommodate. So, instead of buying three or four shelves this time around I bought a duplicate shelf. After I finish unboxing the games I think I should still have room to spare. This is a good thing, because, uh, the “Woman Cave 2.0” has been forced to leak out into the living room. 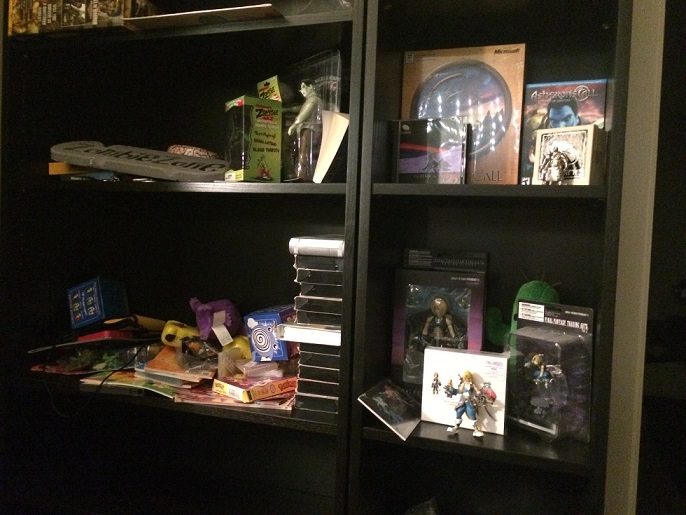 Obviously nothing has really been organized out here yet, but I’m going to have mini-shrines in the office, with overflow throughout the apartment. Guys, I’m using the living room, the hallways, the bedroom, everywhere.

Sooooooooo. There you go.

If you have any emotional support to send my way, I’ll gladly take it. If not I’ll still wish you a Happy Thanksgiving, you bastards.