Last weekend I got A LOT of work done to my woman cave.

Hahaha…that sentence kind of sounds wrong, doesn’t it? Hmm. Okay, I’m going to veer off course for a sec: Its come to my attention that some people find the word “Woman Cave” somewhat disgusting, I’m assuming because of what it could potentially stand for. So ladies and gentlemen, this is me, Britt, clarifying that woman cave has and will always mean the second bedroom in my apartment which I decorate in awesome video game and other nerdy paraphernalia. It shall not nor will it ever stand for a woman’s sexual organ. 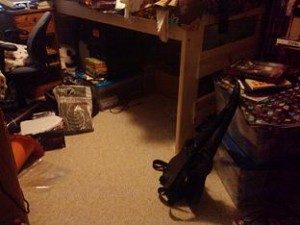 A glimpse of my *current* room after I had removed a bunch of stuff. The bins on the right are filled with games, and there are a few boxes under the bed that didn’t turn out in this picture.

So my goal was to transfer everything BUT my games to the new crib (don’t laugh. I can’t bear to leave them behind at the new place by themselves for a week) and I was successful in my task. I transferred all of my posters, game guides, magazine collections, replicas, swag, etc  over. But what I really took out everything was this: I thiiiink I have a collecting problem. Like, I would pull out a box and BLAMMO there would be another box behind it. And another one behind that. I OWN THINGS I DIDN’T KNOW I OWNED.

With some major help of the parentals, we were able to get the DVD Tower (aka my game tower) and the new desk assembled. What a pain in the ASS. 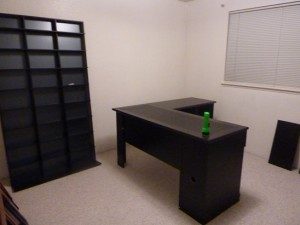 The DVD tower will absolutely need to be anchored to the wall. I think I’ll anchor it where it’s leaning right now. That way I can fit a tall skinny bookshelf to the right of the desk next to the window…and I can stuff it with my guides and magazines.

It’s coming along, but there is still SO much work to do. I’m going back this weekend to start hanging some things up.

But, I had to hang at least ONE thing up before I left…