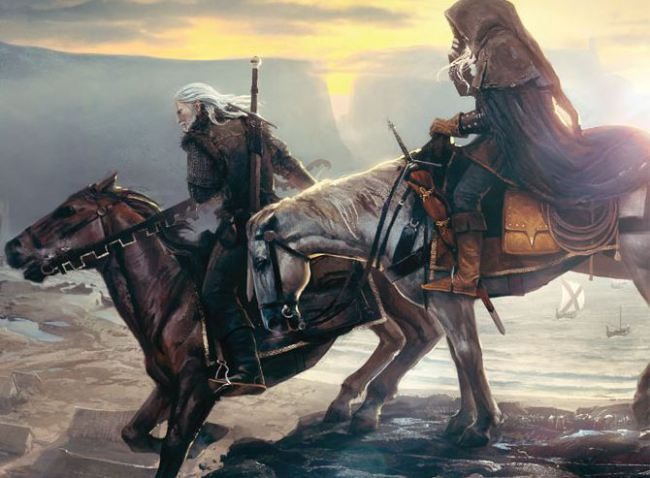 Oh, man. This is kind of bittersweet.

Back in September I was looking for a new game to delve into, and my good friend and podcast co-host Beez recommended The Witcher, for, according to him, it was “a lot like Dragon Age: Origins”. Need he say more? Nay. And this is how desperate I was to start playing — I DOWNLOADED THE GAME OFF OF STEAM. Anyone who knows me knows I’m not a huge fan of digital copies (it’s the collector in me) so for me to download a game and not have anything physical to show for it was quite out of character.

Of course, I would later go on to purchase a physical copy because I’m weird like that, but I digress.

Guys, it was love at fist click. I loved The Witcher. It seriously consumed my life for several weeks, and there were many, many late nights and early mornings because of this game. You know that giddy feeling you get when you can’t wait to uncover more of the story, or that longing you feel as soon as you step away? Yeah. It takes a special game to do that to me, and The Witcher was doing it to me HARD. I distinctly remember texting Beez around 5 am my time, wide-awake in bed, blaming him for my lack of sleep. I couldn’t get it out of my head!

For more proof of my addictiveness, I searched my various social media channels:

OMG. Not even an hour in and I’m already getting laid. The Witcher, I think you and I will get along juuuust fine.

Around this time I was still becoming accustomed to the whole “self-employment” thing, working on my own hours, yadda yadda, so between the anxiety of starting a new business, the system shock of sleeping whenever I wanted until however late I wanted AND The Witcher, I wasn’t getting ANY sleep. It just wasn’t happening. Now, I don’t know how much of that I can actually blame on The Witcher (I know I can blame to some extent, though, since the same thing happened with Breath of Fire III back in the day) but nonetheless I was suffering from a little case of insomnia (which has now dissipated, thank GOD) but I now find myself facing another quandary.

Because I do nothing but stare at a computer all day — whether I’m working, blogging, podcasting, etc. — the last thing I want to do is continue to stare at a computer. And unfortunately The Witcher is on PC only. Sure, I could just skip The Witcher and jump right into The Witcher 2, but that would, like, suck. I’m already addicted to The Witcher, I know it’s a great game, and I’d hate to throw all of that away and forgo the ability to incorporate my save. And admittedly I’d much rather be gaming in front of a large TV screen sprawled all over a couch. Y’know, I think if I bought a separate computer that only existed for gaming it would differentiate my work mind from my gaming mind and I could just relax and enjoy the game. But that would be expensive and stupid. Hmmm…. WHY IS LIFE SO HARD?! #FirstWorldProblems

But for those of you already finished with the first and second Witcher, you’re in luck, because supposedly The Witcher 3 will have over 100 hours of gametime AND the map is larger than that of Skyrim. Intimidated yet? Furthermore it was earlier reported that The Witcher 3 would be the final game in the series, but it has since been clarified that it will be the final game of Geralt’s story, and that the lore of The Witcher will be left open for possible future installments. BOOM.