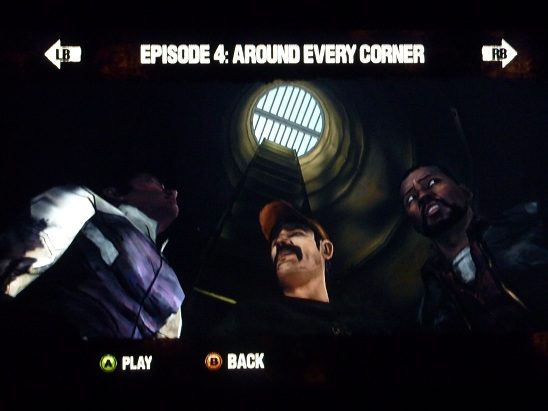 So, um. Yeah. That last episode of The Walking Dead was balls-amazing, cinematic and had a lot of meat and girth to it. Like, I don’t even know where to begin — so much happened! Maybe I’ll just stick to the main plot points. I ARE OVERWHELMED. I wish I could vomit everything into a bucket and pour it into your brains.

And it’s behind-the-scenes time: I had a post written up, but WordPress decided to lose it. And, like, I put quite the bit of effort into that post. So, in a way of admitting defeat I’m going to wave my white flag and post chunks of the Episode 4 recap, courtesy of Wikipedia. (God, they have been a lifesaver lately.) Talk about 100% concentrated lame-juice.

“In Savannah, the survivors find it overrun with walkers. Upon finding a boat, they make plans to secure supplies from the Crawford community, only to learn that it has been overrun with walkers. Clementine is kidnapped by a mysterious man, and Lee gets bitten by a walker, leaving him little time to save her.”

Well, there you go. That about sums everything up. Now, please enjoy some photos accompanied with my smartassery from the episode.

And sure, a bunch of other people died during this episode, Kenny almost killed Ben himself, and Ben proved to everyone he’s a dumbass. But with all of that said, I can’t believe I’m about to FINALLY play the last episode! I’m nervous, anxious, worried…I’m 99% sure Lee is going to eat shit (unless Telltale pulls one of those “OHAI HE’S ACTUALLY IMMUNE!” shindigs) and, well, I don’t know who else is going to die, but I hope I see Lilly’s stupid murdering-face again so I can punch it.

NERVOUSNESS, I HAZ IT.