I didn’t bitch about this too publicly because, well, I just don’t like to bitch—but now that all is well and fair in the game of Britt vs.Comcast I feel like I can post this story, for it now has a happy ending.

It all started when I recorded an episode of n00bketeers back in early December. It was just a two-person episode with Beez and I and it was our last show before the holidays. It was a short, fun 30 minute shindig but when I went to send Beez my .wav file I was slapped in the face with a 300+ minute upload time.  As a point of reference, an hour long episode normally takes anywhere from 15-20 minutes to upload.  (I even waited for the 300 minutes, but it timed out every time.)

Unfortunately, despite all of my n00bish efforts I never could get the file to Beez.

Fast forward a few weeks and I noticed my computer was in a trend of acting pretty freakin’ wonky. Things would take FOREVER to process– it would take anywhere from 5-10 minutes just to post something to Twitter or Facebook, and to top it off my internet was crapping out (ie; going tits-up) a few times a night. The icing on the cake of suck was when I tried to upload a New Year’s Eve vlog but was, again, slapped with a whopping 900+ minute upload time.

So what did I do?

I waited 900 minutes for my vlog to upload. Yep. That’s what I did. I’m a very patient person. Did I call Comcast? I did, after waiting the 900+ minutes (which turned out to be a big waste of time). The customer representative I spoke to said he had reset some signal to something in my room and that all upload/download/sidewaysload speeds should be working just dandy. I tried uploading a sample video…and it worked!

A few days later the new year rolled around and it was time to fire up the We’re Not Dead podcast. But the podcast needs to be uploaded to this thing called THE INTERNET so people can, y’know, download it and stuff. (What a concept!) I had spent all night editing the first episode of We’re Not Dead (as well as editing another vlog) aaaand man, it felt good to get all of my editing done in a night! Feeling rather studly, I prepared to upload both items.

Do you see where this is going? Do you recognize a pattern, perhaps?

I was slapped again in the face with a total upload time of over 2000 minutes. This slap was extra sharp, though—it was like Comcast had sprinkled diamond-infused baby powder, rubbed it all over their leather gloves and KA-PLAPP’D my face. But I wasn’t about to be pwn’d by a shitty internet connection. Oh no.

….So I woke up at 6 am the next morning and drove to my parents’ house so I could upload the files. (I guess I did get pwn’d after all.)

But on the way there it hit me: MAYBE this is an issue with my upload speed?

I ran a simple test when I returned home, and this what I got:

And this was my reaction:

I mean, I don’t know a heckuva lot about this kind of shit but I DO know that the number being two spots to the right of the decimal indicates it is a very, very low number, and thus a very, very slow upload speed. So back on the phone with Comcast I went. After an hour of tearing my shit up around my apartment talking to a very patient representative (bless her heart) we both came to the conclusion that an actual technician needed to come out and figure out what was causing the– and I quote– “epic disturbance in speed.”

So the Comcast tech came out the next day. After some thorough research he came to a rather disturbing conclusion: some asshat-douchebag-bitch had shimmied up the attic in my apartment complex in a (successful) attempt to sabotage my internet! WHAT THE HECK?!

CURSES!!! ::shakes fist:: WHOEVER DID THIS, I HOPE SOMEONE SLIPS AN EX-LAX INTO YOUR NEXT MEAL!!! I HOPE YOU THEN GO ON A HOT DATE BUT SHIT YOUR PANTS, CAUSING YOUR DATE TO HATE YOU FOREVER!!! THEN YOUR XBOX 360 RED RINGS YOUR ASS!!!

Ahem. Allow me a moment to proper myself.

…Damn, I feel better. But what makes me feel even better is this: 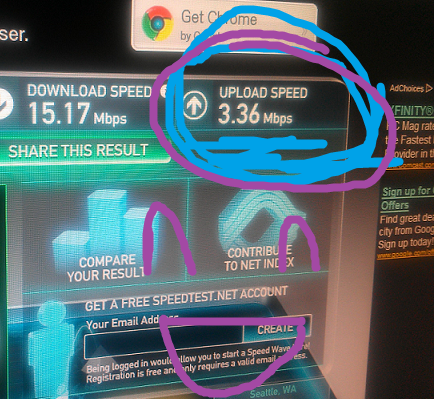 See? I told you it was a happy ending.