I haven’t blogged about it a lot on here, but if you follow my Twitter or Facebook feed you’ve undoubtedly seen a few of my tweets about Enchanted Arms. If you don’t follow any of those, SHAME ON YOU. Ahem. SoOOoOoO I’ve been playing Enchanted Arms (NO WEI!) and after a lovely 39 hours of spending close, quality time together — I’ve decided Enchanted Arms and I need to go on a break. 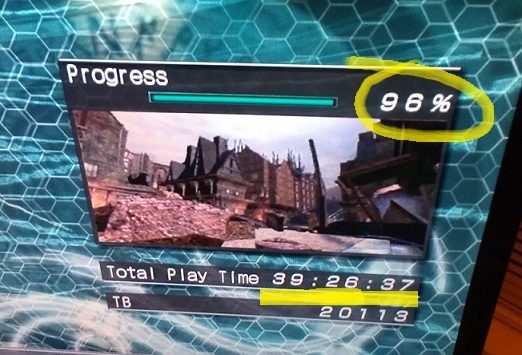 Yessire, after 39 hours I’m unwilling to hammer through the final four percent. No, it’s not a Mass Effect 3 situation where I just don’t want to face the ending or anything like that. Actually, I’m willing to bet those of you who have played and/or finished Enchanted Arms have a hunch as to what I’m about to bitch about.

But for those who don’t, allow me to explain. ALLOW ME OR I WILL UNLEASH THIS RAGE I HAVE TOWARDS ENCHANTED ARMS ON YOUR FACE.

I’ve spent almost 40 hours of my life playing this JRPG — a JRPG that has grown on me; a JRPG I only really started to enjoy after I hit the 50% completion marker. But I digress. Because this is a typical JRPG, there is a LOT of grinding to do, and I’d say I spent a considerable amount of time grinding and leveling my characters. That being said, the leveling system in Enchanted Arms is unlike any sort of leveling system I personally have seen before. While it sticks to the normalcy of battling, gaining experience, leveling up, etc., your characters ALSO gain skill points (SP) after every completed battle. You can then use these SP to immediately beef up your character; whether you want to increase his or her HP, EP, Direct attack, Agilty, whatever — it’s doable. Got it?

And because I spent a considerable amount of time grinding and leveling my characters, every boss leading up to this point has been nothing more than a cakewalk. Like, I’m not even breaking a sweat. (Well, a bead or two has fallen once or twice.)

Now, let me show you a tweet from last night:

When I started Enchanted Arms last night, I was at 83% completion, so I was STOKED when I rocketed up to 96%. Take a second and imagine how happy my face would look if Nathan Drake massaged me every day of my life. With buffalo sauce. Got a weird mental image in your head? Good. That’s how happy I was, knowing I had only 4% to go.  But that leads me to my next point — I’ve been using a walkthrough with Enchanted Arms (GASP!) and when Britt uses a walkthrough it’s only because she wants to finish whatever game she’s playing ASAP because she has more pressing matters (aka better games) she wants to get to.

So, right. I found myself at 96% completion, the game is really picking up, we’re on the brink of climax, I’m absorbed by the characters, the story, the dialogue (which is a shocker if any of you are familiar with Enchanted Arms) and before I know it I’m about to face the FINAL BOSS in two-part battle showdown. YES! This is it!

And then I read this in my walkthrough:

“FINAL BATTLE #1
Now this is definitely the toughest battle of the game. First of all, if Atsuma only has 2000+ HP…forget it, you can’t win this battle. I managed to win this battle ONLY with Atsuma at 7000 HP+. So i suggest you to go back to London City, play at the casino, win some coins, exchange them into money, buy plenty of Mega Skills Gem and use them to improve Atsuma’s MAX HP until 6000+ at least (the more the better).”

I understand a lot of that might sound Greek to you,  but I think you’ll understand why I’m pissed off as soon as you see the below screenshot that depicts the current HP levels of my characters: 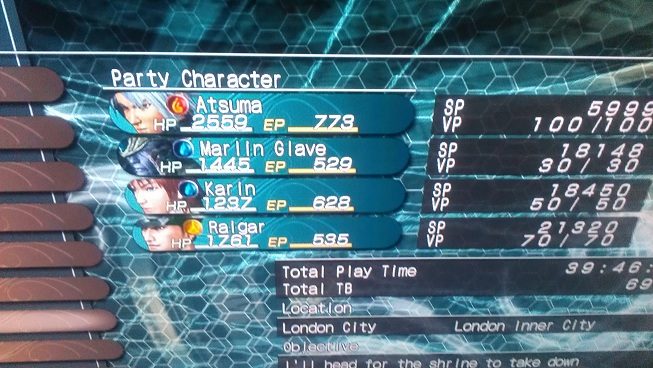 DO YOU SEE THOSE HP NUMBERS?! THOSE AREN’T ANYWHERE NEAR 7,000. And that casino mumbo-jumbo that was mentioned in the walkthrough? Exploiting the in-game casino to win money and buy Mega Skill Gems (which give you instant Skill Points), as it turns out, is the ONLY semi-efficient way to beat this game. (Running around and grinding would probably take years.) Okay, sure, no big deal. I can just go exploit the casino and level my characters up! OH! But you see, there’s a mundane process to all of this which ultimately means you can only gain about, um, 400 HP every half-hour or so. (You have to win chips from the casino, trade them for prizes, run to the store, sell the prizes to make money, buy the Mega Skill Gems, equip them and THEN allocate the points to your HP gauge, which only boosts in increments of 15.)

After reading this,  I shopped around on the internet to ensure my walkthrough’s advice was legit. And oh yes, it is. Google “Final Boss Enchanted Arms” and you will get a PLETHORA of websites and forums that houses people’s bitching and moaning about this entire situation.

At this point, I’m like, screw it. I’m at the final boss, I’ve dedicated 40 hours of my life to a game I’m not even that happy with (in fact, if I didn’t have the whole “not finishing Illusion of Gaia” thing hanging over my head I probably would bag this one too) just to get a big “FUCK YOU!” at the end. And it’s not like I didn’t take the time to level up during the game or anything like that. I SPENT TIME GRINDING, FROM SOFTWARE! >__<

So, this is how this break is goin’ DOOOWWWWN: I’m going to start another game, and every chance I get I’m going to exploit the casino and level up Atsuma by about 500 HP until I get to about 5,000 HP. Then I’ll have to level everyone else up to 2,500 HP. At that point I’ll try facing the final boss. If that is a complete and utter fail-whale I’ll have to continue my half-hour a day shindig. HNGHHHHHH.