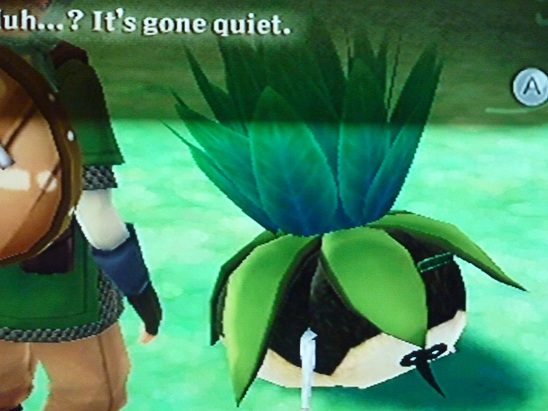 Before I even start this log, I feel the utmost necessity to let the internet know that I want a Kikwi right now. Actually, like, yesterday. HOW CAN SOMETHING SO WEIRD BE SO CUTE?! 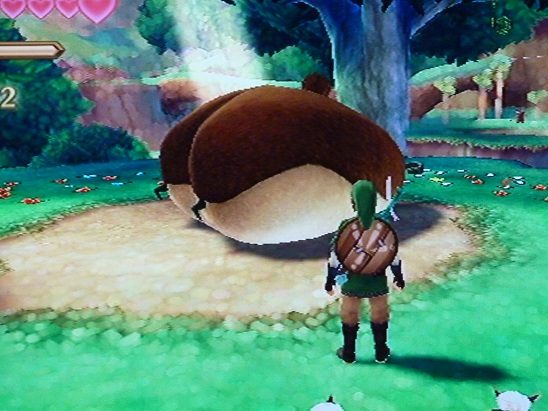 And then…there’s the elder. Not so cute. He kind of looks like a deformed nut of sorts.

Most of my session with Skyward Sword yesterday was repeat stuff; I had opened up the portal to the Sealed Grounds and only needed to purchase my shield before I ventured down soouuuuth. (Brown Chicken Brown Cow?).  Eventually I made it to Faron Woods (which is where the Kikiw photos came from <3), the Deep Woods (haha…”deep”) and finally to the Skyview Temple.  But before heading inside Skyview I headed back to Skyloft so I could harass Beedle and explore a bit.

Since I had sliced-n-diced a few Goddess Cubes, the resulting treasure chests were my first destination. My pursuit of one of them lead me to The Lumpy Pumpkin (YUM), which I’m going to assume is the equivalent of Lon Lon Ranch. Now, the people in The Lumpy Pumpkin are artards. A heart piece rested atop of the owner’s “custom” chandelier. Now, what the hell? Of course I’m going to roll into your walls until that bad boy crashes down (and almost kills everyone) so I can receive my first heart piece. So, like, why you get all mad and make me deliver Lumpy Pumpkin soup to the Knight Commander, yo? Apparently running errands is Link’s way of paying the owner back, and he will have more “work” for me in the future. Wonderful. 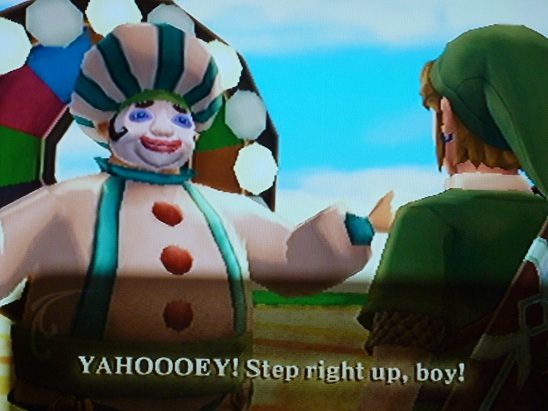 I found this poundcake while searching the skies of Skyloft. I feel like there is one of these, um, type of characters in every Zelda game. So I’m glad I found him. I guess he’s working on a game, but of course it’s not ready yet. It’ll probably involve my Loftwing, rupees and a heart piece. JUST SAYING! After dinking around I found Beedle’s lil’ airship floating above Skyloft and purchased a bug net from him. (I would have purchased the larger wallet and the adventure pouch, but I was still short on rupees from breakign that squealing-woman’s antiques.) I felt satisfied, so I headed back to the Skyview Temple.

Because I had already made it about halfway through the temple, it was relatively easy and I whizzed through it. 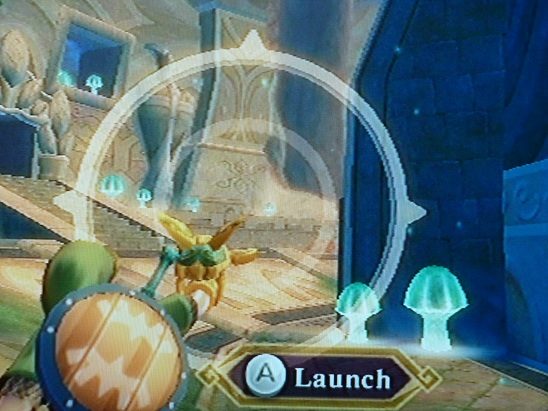 So, the beetle. When I first saw this bad boy in action about a year ago I was a little apprehensive. Why? I don’t know. Maybe it was because it was something different (although one could argue it’s like…a..boomerang? A BATARANG? A REMOTE CONTROLLED BATARANG?!)  and at the time I was worried the Zelda franchise was going in a tail-spin and yadda yadda yadda, but I like this lil’ dude. He’s super handy and he knocks down Skultulas for me. <3.

Eventually I spotted a weird concoction across the way. 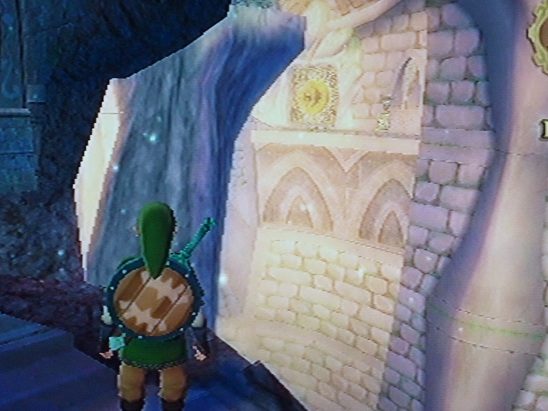 My first reaction was, hey, that’s a funky boss door. I wonder what the boss key looks like? HMMMM…. 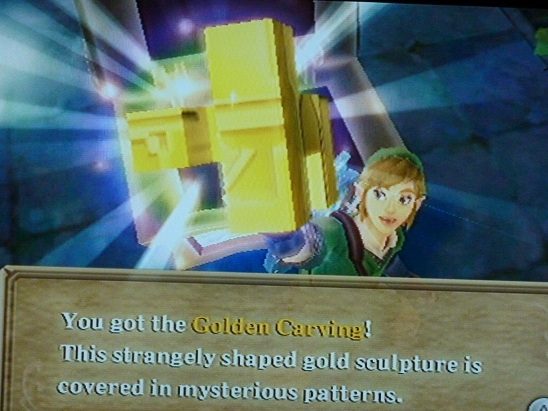 Oh. Right. Totally not what I was expecting, but as soon as I saw the Golden Carving  I remembered that THAT is how things go down in Skyward Sword. And let me tell you, I felt like my arm was having a spazzattack as I tried inserting that thing into the…hole. Like, I didn’t know my wrist could contort to those sorts of angles. But alas, I eventually succeeded and wandered into the golden gates of awesome.

Or so I thought. 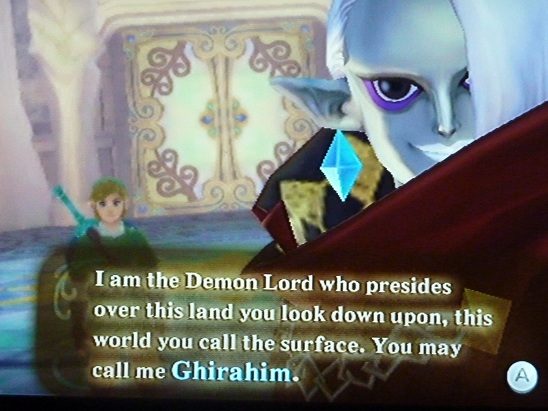 Ladies and gentlemen, let me introduce you to Ghir…Ghira…Ghiramim? Ghirahim? Yeah. The one thing you need to know about this asshat is that he is a bastard. Yes, an asshat-bastard is exactly what he is. (But I’ll get more into that later.) So, this is the guy responsible for starting that tornado and cock-blocking Link–because he was totally going to be getting some that night–which is reason enough to want to murder him. He calls himself the “Demon Lord” who presides over the surface.  Apparently Link was supposed to be torn apart in the tornado (asshat-bastard) and I believe Ghirahim said that Link’s existence didn’t matter either way. SO, looks like homeboy has no idea who Link is.

According to Ghirahim, Zelda was almost within grasp until the Goddess’s assistant saved her…or something. That pissed him off and he even threw a little bitchfit while telling Link about it. It was cute and fitting for an asshat-bastard. Yadda yadda yadda. Eventually he shut up and we fought. 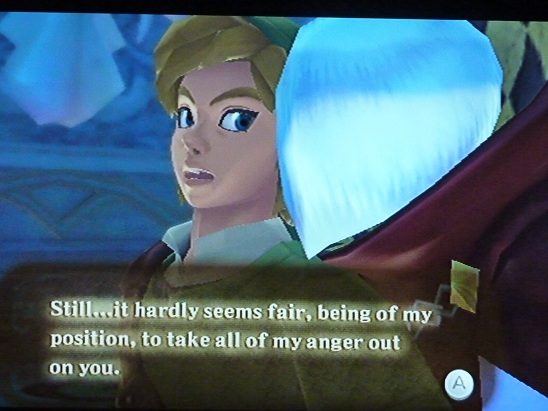 How did the fight go, you ask? Here. This should sum everything up in a nutshell.

Sighsighsigh. I wasn’t used to the menus yet, and I needed to heal myself. As soon as I finally figured out how to switch to my potions (it’s a swipe motion, btw, you don’t need to press anything to select it!) Asshat-Bastard flung missiles at me aaaaaaand…I croaked. Died. You guys, I don’t die in Zelda games. I never died during Ocarina of Time. I don’t think I died during Twilight Princess. I did die a lot during A Link to the Past…BUT THAT DOESN’T COUNT! ARRRRRRRRRRGGGGGGGGGGGGGH.

I promptly started the battle again…and the first thing I did was accidentally drink my health potion. Great. So there I was, about to ensue in an epic battle except I didn’t have anything to use if I, you know, was about to die again.

I was a badass (scuze me while I toot my own horn…I don’t do it often) and I killed him with ease. The bastard never laid a hand on Link. YEAH! What what WHATTTTT.

After he vanished (why do they always do that?) I proceeded through a door and was greeted by the Skyview Spring.  I was told by the Goddess that out that Zelda had already been there (but just how she got there, who the hell knows? She must have some epic air-floatation device. Like an air balloon. Or her Loftwing. I DON’T KNOW AND IT CONFUSES ME) and in the spring she “purified” her body. Yeah she did. 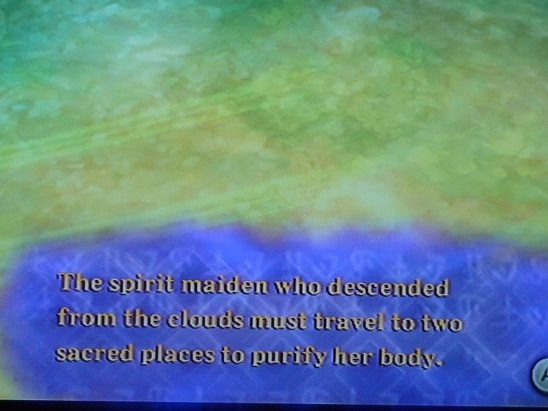 According to Fi, there is a 97% chance Zelda has headed to Eldin’s Spring, where she needs to purify her body another time. Then she should be good to go. 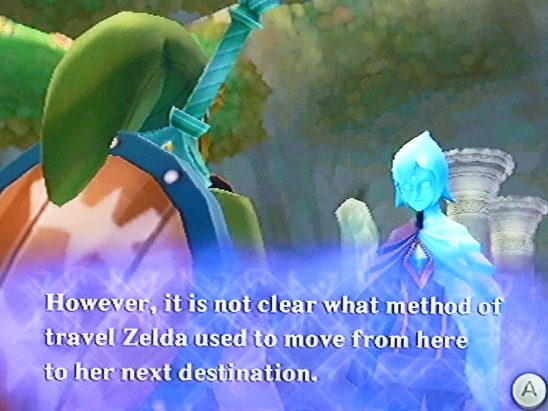 With mah brand spankin’ new Ruby Tablet in hand, it sounds like my next destination is Eldin!!!