Wooo. Emerald City Comicon took place LAST last weekend (Fri-Sun, March 4-6) and I’m just now talking about it. Le sigh. But no worries, I’m going to see if I can temporarily erase PAX East from my mind and re-visit that weekend! 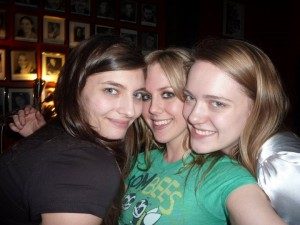 But you see, before NERDprov started, Kristina and I were hanging out in the theatre’s bar and the bartender was adamant on getting us drunk. SPOILER: HE SUCCEEDED.

The show itself was extremely fun to watch and VERY entertaining to judge. I believe I was the “how funny were you” judge. It was tricky for me because I uh laugh at EVERYTHING. But, I had been told to be a hardass and give lower scores than I wanted to. I was also told to act serious when we (the judges) were introduced, but I’m sure I was giggling and had a shit-eating-grin on my face. I blame the vodka. (THANKS BARTENDER!)

After the show, everyone met up at the bar (once again).

::NOTE: The pictures are kind of small, but if you click on them…BLAMMO! Full size, baby! *snort*::

Saturday we basically wandered around, ooohing and awwwing at things we couldn’t afford while taking pictures. Below is the only “scenic” photo I took. But every aisle was lined with awesome things to look at and buy (if you had money, unlike me!) ::shakes fists at PAX East plane tickets::

Soon after arriving, we found Pedobear talking to children…no bueno…

So Tara and I decided that we needed a photo with him.

Tara and I ran into our friend Joe from Microsoft! He’s a very tubular person. Yes, I just used tubular in a sentence. I hope it still means “awesome”.  Anywho, he’s the guy that gave us the tour of Microsoft Surface!

And please, do yourself a favor and admire this zombified little girl. If I ever have a daughter, you know what I’m dressing her up as for halloween. Or for her friends’ birthday parties. Either way.

And because it IS a comic-con, there were butt-tons of Wonder Woman cosplayers. But we found the best one, hands down.

That night we braced the freezing weather and went to the Hard Rock Cafe and watched that guy Spike from Buffy sing. I dunno anything about him, I never watched the show. There were a few other bands as well.

Seeing as ECCC was my first comic-con ever, I wasn’t sure what to expect, because honestly I know close to nothing about the comic industry. BUT. There was SO much cool stuff to gawk at! Seriously, I could have spent hundreds of dollars on stuff that just LOOKED cool. But, I only had a few dollars to my name ::shakes fists again at PAX plane tickets:: so I had to spend mah moniez wisely. 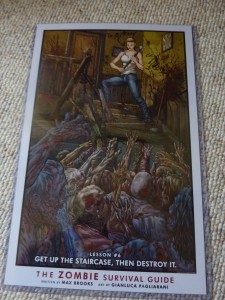 So, by now you should know that I’m a HUGE zombie nut, and one of my favorite authors, Max Brooks (author of World War Z), happened to be at ECCC. Of course I had to get his autograph.

Unfortunately I was SUPER awkward when I met Max. I was like. “ohai I love your work.” he said thanks, and that was it, followed by his scribbling on my poster. OH WELL.

Another booth that caught my eye was being run by Chris Furniss. He had all of these adorable video game drawings up for sale. I had no problem plunking down a few bucks for my own, personalized drawing:

I recommend that you check out some of his other drawings.

Since I was on a Link-kick, I also asked the guys from Backroom Comics to draw a photo of Link and I getting married on unicorns. It turned out lovely.

Bottom line: Emerald City Comicon was an absolute blast. Since it was so much fun, I’m *hoping* to make it out for SDCC this July. Which, of course, means more money spent, but it’s for a worthy cause, amirite?!