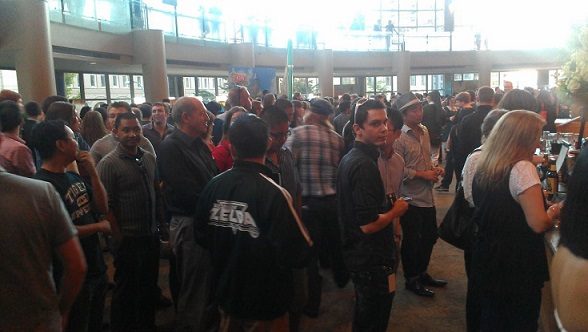 True to form, the Legend of Zelda: Symphony of the Goddesses shindig was brilliant. I raved about it a year and a half ago, so I won’t kick an awesome, albeit dead, horse, but there were a few changes to the symphony this time around. For starters, handhelds were a thing that were celebrated — probably because of Link Between Worlds’ imminent launch and, hey, people love them some handheld action — so we were treated to music from Spirit Tracks and Link’s Awakening. Last year I was happy handhelds were excluded, but now that I’ve spent a good chunk of time with Link’s Awakening I super duper UBER appreciated the tribute. /golf clap

My favorite “movements” (thanks for the lingo lesson, Evan!) were Ocarina of Time, Majora’s Mask, A Link to the Past, Twilight Princess, Wind Waker — oh, er, that was all of them. I’m quite bummed Skyward Sword once again didn’t have its own dedicated movement, but at least we saw about 30 or seconds of Skyward Sword action during the opening, uh, movement. MOVEMENT MOVEMENT MOVEMENT.

There were also several Wii U and 3DS booths scattered across the main lobby, sporting Wind Waker HD and Link Between Worlds, so that was pretty cool. The King of Red Lions display from E3 and PAX was also present, along with a Zelda backdrop that proved to be groovy for photos.

Unfortunately the drinks weren’t themed (last year you could choose from the “Triforce” or “Heart Potion”) but, hey, whiskey did the job juuuuuust fine.

The cosplay was aplenty, and I made it my duty to annoy people and ask for photos.

Again, I cannot recommend ENOUGH that you see this symphony should it make a pitstop in your city. So, yeah. Check out the tour dates!