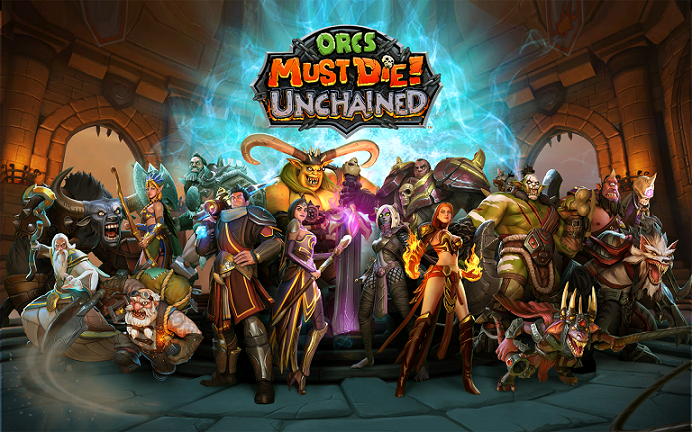 MOBAs kind of scare me. I simply don’t do PvP as I’d much rather cooperate with others than, y’know, kill others. Honestly, the thought of competing against real players gives me a strange sense of anxiety. With ALL of that said, you can probably imagine how freakin’ blown my mind was when I found myself having a grand ol’ time playing Orcs Must Die! Unchained, a “fast-paced fortress siege action game” that includes PvP and MOBA elements. And while I was getting my ass absolutely HANDED to me by the person standing across from me, I didn’t friggen’ care because I was having so much fun.

But because I don’t quite understand the nitty-gritty details of what I was doing (besides hitting people, protecting my allies and trying not to constantly die), as there is a learning curve to the game, the following trailer will likely give a better visual than I ever could:

If you want to see more gameplay, this 15 minute video is worth a watch:

Playing Orcs Must Die! Unchained in the middle of PAX was crazy, hectic, and half of the time I was doing nothing but running into walls, but despite that I truly had a wonderful time. The upbeat energy of the game is simply contagious.

Between planning strategies, laying down traps (I loved the tower defense elements) and the tongue-in-cheek humor, I have no doubt that Orcs Must Die! Unchained will be a blast to play with friends. Hell, it was a blast to play with strangers. On that note, if playing against real people isn’t your thing, you will have the option of playing against bots. Apparently even the dev team can’t beat the hardest AI themselves, so if you’re worrying yourself silly about the assumed lack of AI difficulty, stop. ;D

Orcs Must Die! Unchained is coming to PC and PS4. No release date has been set, but you can register for a beta key here.