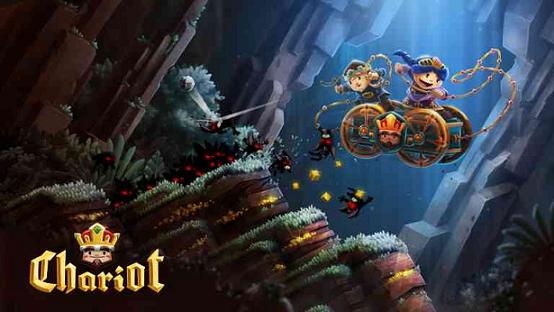 Chariot is a physics-based, up to two-player local co-op platformer made by Frima Studio that kicks a large amount of ass. Honestly, it’s one of my biggest highlights of PAX East. There are two playable characters in Chariot; a princess and her fiance. The king has recently croaked, and these animated cuties need to find him a proper and worthy resting place.

The physics feel great. The first level my partner and I played was simple enough, and I’d say we were making relatively great progress — with ease, I might add — until we committed the unfortunate act of falling down a chasm and wound up at the beginning of the map. Instead of retracing our footsteps, the developer gave us a harder level so we could truly test our skills. This level had many more floating platforms and tricky ledges, and as you can imagine, floating platforms and tricky ledges can be tough to leap on while you and another person are carrying a freakin’ dead king, but it wasn’t until we saw impeding lava beginning to rise did we understand just how cruel this game can get.

Chariot can be played in single-player, but I would most definitely recommend playing with someone else. (Chariot only supports local play.) Depending on you and your partner’s relationship, I’d expect to either have many laughs…or fights. Hell, Chariot might provide you with that relationship counseling you’ve been putting off. I mean, you HAVE to communicate or you ain’t going nowhere.

I was surprised to learn that Chariot has been out since September of last year, because had I known about its existence prior to PAX, I most definitely would have picked it up by now. Chariot is available on Wii U, Xbox One, PS4 and Steam.