I’ve shown you my woman cave, my living room, parts of my kitchen but NEVER have I shown you the room in which I slumber. Not because there are dirty clothes strewn about, God forbid, but because my bedroom really isn’t THAT exciting. (Exciting meaning there aren’t many items of the nerdy variety within, not because – wait for it — nothing exciting goes on in there!!! BAZING!!!!) (Sorry, I had to.) (Did I just cross an inappropriate line?)

But things change, and I’m excited to announce I’m on a never-ending mission to make my bedroom a little more exciting.

I do most, if not all, of my gaming in my living room because that’s where the big guns are – my sexiest TV, the 360, PS3 and the, uh Wii. If I ever get the urge to fire up a retro console I’ll just pull it out of my woman cave or wherever and temporarily hook it up. But as I’m getting older I’m becoming more and more of a lazy bastard and the act of finding a loose console and all of its components is rather irritating, so I figured I’d make my bedroom more nerdy by hooking up the consoles, which in turn requires me to track down all of the console components once and for all. 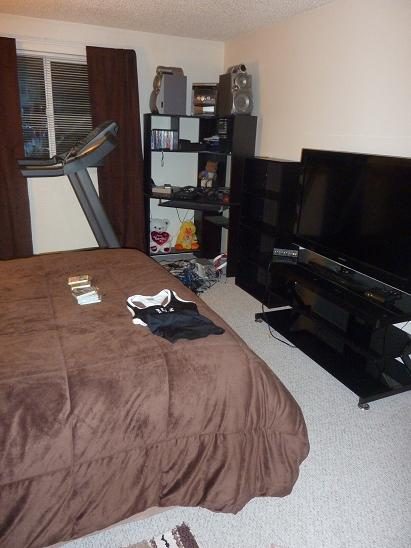 My room is kiiinda a work in process. I just recently got the TV stand (God I love Craigslist) and before that I had one of those HUGE clunky wooden entertainment stands that could only compensate a 27” tube. The one good thing about that entertainment stand was the massive storage compartments – I easily stored all excess consoles and controllers within –but now that I no longer have that storage, my corner desk (which I haven’t used in over a year) is now the proud host of the excess overflow. As soon as I get everything hooked up and off of the desk I’m getting rid of it. 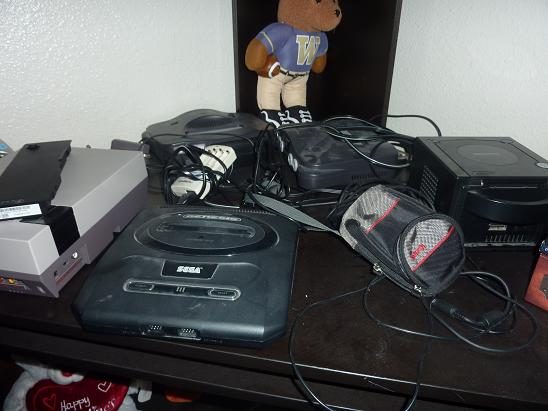 Hello, dust! I haven’t mentioned this yet, but these aren’t the same consoles I have on display in my woman cave. These are consoles that should actually work, ‘cuz they’re the ones I used to actually play back in da’ day. They’ve just been neglected for a little while. </3. 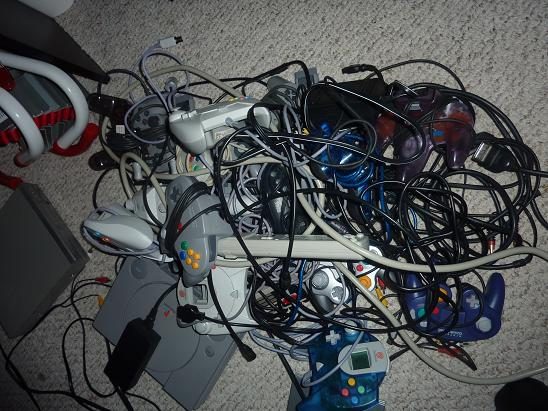 And, hello, massive cord-ation. Like the consoles, these used to be tucked away in a compartment in the old entertainment center. But they have been living on the floor for about a week or so. Thankfully most of them ended up being controllers, so it wasn’t too difficult to organize them and figure out what’s what. 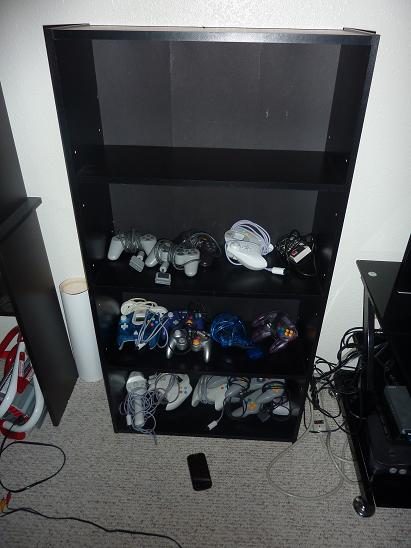 SEE?! Not bad at all! I found this shelf at a garage sale over the weekend for $15, and it PERFECTZ0R for what I need! Unfortunately, I have an entire basket of extra controllers in my living room. I don’t even know what’s in that basket…that’s a whole ‘nother project in itself. ::shudders at the thought:: 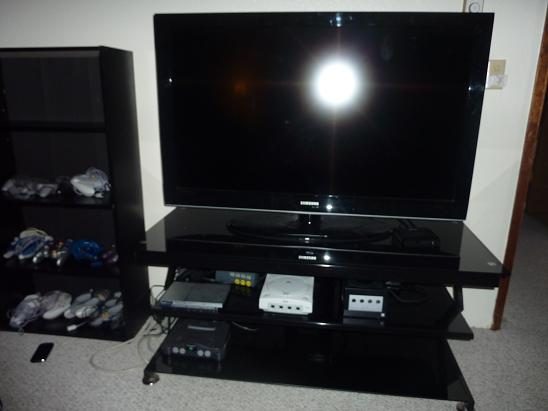 By the end of the night I had hooked up the PS2, Dreamcast, N64 and *partially* the GameCube…I can’t seem to find my component cable for that bad boy, and um YEAH the last time I looked online a replacement cable cost, like, $100!!! That being said, I’m not too worried about it because A) I have a boxed GameCube in my woman cave, and I’m sure a component cable is with it and B) I can always use my Wii to play GameCube games. One of the next things I need to do is try to find another working SNES (I have like, four floating around, but whether or not they work is another story ) that will permanently live in my room. God, I love cartridge-based saves…no need to transfer consoles around…we had it so good back in the day… ;D

I also need to try to figure out how the heck I’m going to hook up the Genesis and the NES, as those consoles are old as dirt and all I have are weird little box thingies my dad used to use to hook them up to the tube TVs. I think they’re called RF adapters? What is this I don’t even. In any case, I was too tired last night to wrack my brain for answers.