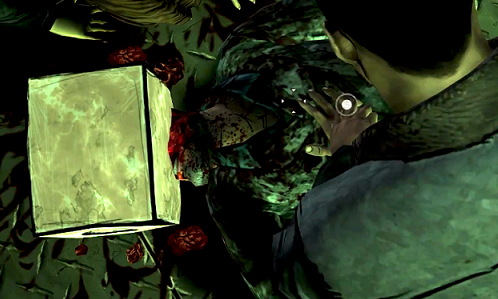 If you were to look up the definition of “happy pants” in the dictionary it would have the above picture with the text “THE WALKING DEAD!!!11” plastered right next to it. Er…actually, anyone who has played Telltale’s episodic The Walking Dead series knows that the photo depicts a very awkward scene, so, yeah never mind. My point is that Telltale treats The Walking Dead gooood. So, so good.

Therefore I was insanely happy when I found out that not only was it re-confirmed that season two of The Walking Dead is coming, but when Gary Whitta — writer for The Walking Dead — announced on Up At Noon that something else might be coming down the pike and it’s going to punch all of us in the face before season two launches.

“I can tell you what you already know, which is season two is coming. There’s not much to say because it really is very early…it’s a way off. But, knowing that it’s a way off, and knowing that people are hungry for more walking Dead…there may very well be more Walking Dead from Telltale before season two. We may have a little something extra for you between season one and two. ”

SWEET SWEETNESS ALL OVER MY GIRLY BITS.

Did you play The Walking Dead? What would you like to see Telltale’s little “intermission” turn out to be?