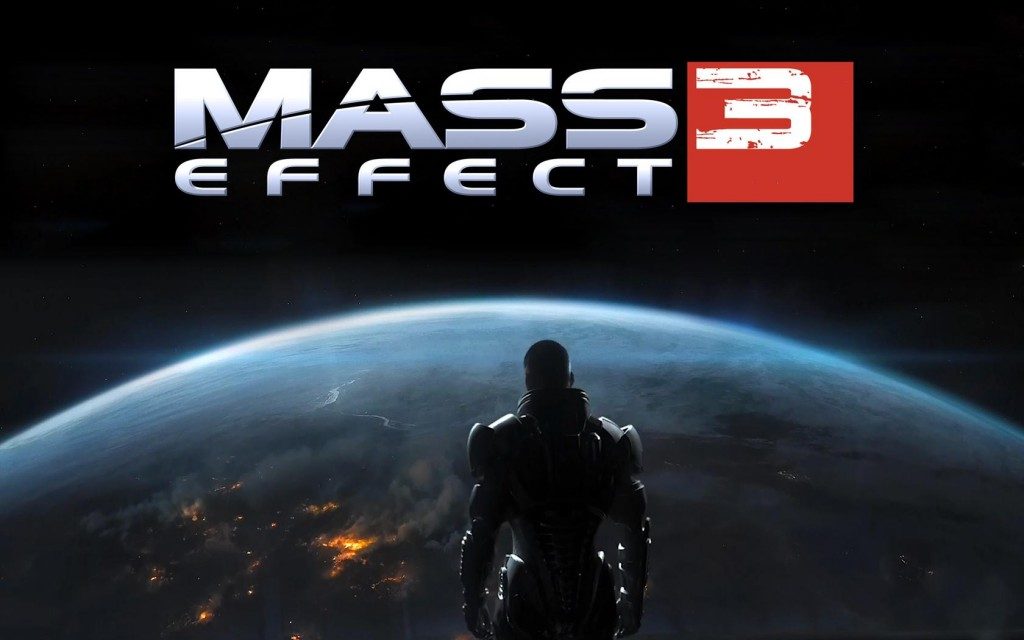 Here’s the thing about maintaining a log for a game like Mass Effect 3: Because the game is so freakin’ good you get freakin’ hooked all you want to do is freakin’ PLAY, not stop to take photos—let alone notes—aaaand therefore your log kind of falters. Kind of goes limp, if you nah’mean. Like a boner-kill.

You guys, I want to mate with Mass Effect 3. I want to lay it down on a cozy, soft rug by a crackling fireplace do ungodly things to it. But seeing as Mass Effect 3 isn’t anything more than plastic and two discs, I may have to settle for just caressing the case. Oh well.

I’m not sure how many hours I’ve put into the game thus far, but I have a pretty good grasp on the story. The Reapers have come to partake in a lovely act of genocide–which occurs every 50,000 years or so—with the intent of wiping out all sentient life across the galaxy.

Shepard was on Earth when shit hit the fan, so she peaced out and went to Mars. There she found Cerberus going after Liara, because blueprints of a Prothean-made Reaper-killer there aaaaand everyone wants them because they can, like, destroy Reapers, and that’s always good. Anyway, long story short I’m now semi-fighting against Cerberus in order to collect Prothean artifacts that can tell us more about…stuff. (We don’t know what Cerberus wants or what their motives are—the Illusive Man hinted at controlling the Reapers?) Ultimately, my goal is to reunite the galaxy. Isn’t that cute?

Let’s talk about the real meat-n-taters of this game, the characters!

Kaidan: Oh, Kaidan. You cocktease. One moment you’re fighting by my side and the next you’re getting beat to a pulp by Cerberus doctors. This, in turn, causes you to be laid up in critical condition at the local Citadel hospital. WAY TO GO. But for realizes, Kaidan has come a long way since ME1. He’s more assertive, studly, confident…I…I think I’m in love… 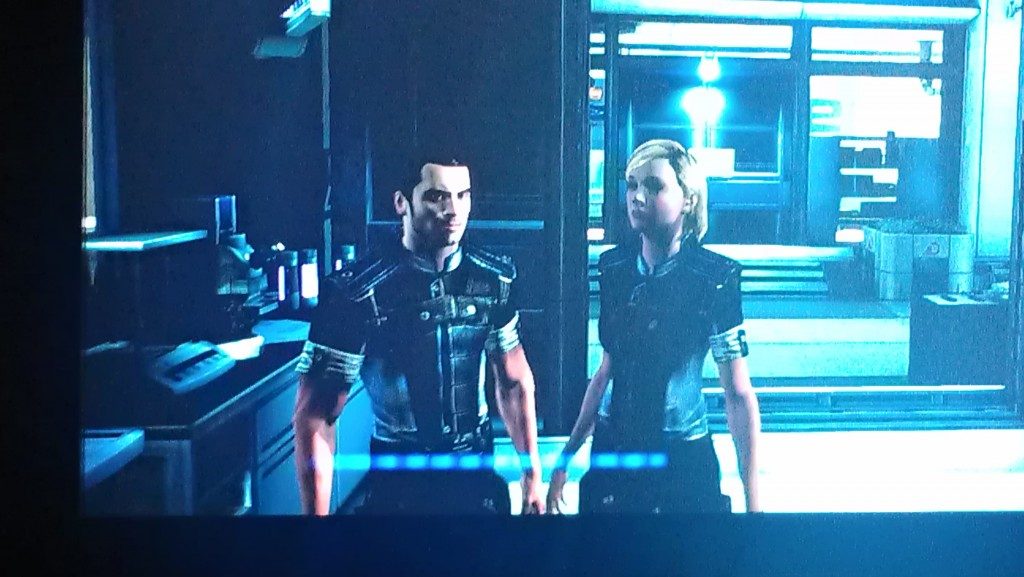 Like I said, though, he’s currently in a hospital. He’s no longer battered and bruised—he’s actually on his feet—but he’s unsure whether he’ll return to the Normandy or not now that he’s a HIGH AND MIGHTY SPECTRE. Ahem. Listen here, Mass Effect folk. I did not remain faithful to Kaidan in ME2 only for him to remain a booty call on the Citadel in ME3. I mean, although James is kind of a meathead I’d totally hit his shit. But I’m being a good girl and remaining faithful to my digital boyfriend. REWARD ME.

Although we did talk about what happened on Horizon. He said, “All you need to know is I’m not seeing anybody and that I still care.” DAWWWW. Okay, fine, you silly biotic, you. You win. <3.

Garrus: I freakin’ love this Turian. If only he didn’t look like post-apocalyptic cricket who had survived a nuclear holocaust…

Garrus is still the same ol’ Garrus. I ran into him on Palaven’s moon while protecting the Patriarch. I think he and Shepard have the best interactions out of all of the characters; the conversations are mostly packed with dry humor and dare I say, some sexual tension? Anyway, Garrus has a father and sister on Palaven. Hopefully there will be a mission to save those two! It would also be interesting to see Garrus end up as the Patriarch. It could make for a nice ending to his story…

Liara: I’ve never really had much of an attachment towards Liara (minus that one time in ME1 I almost romanced her—EEK!) but I gotta give the blue bitch props; she’s definitely become much more of a badass since ME1, which was evident from our brief interaction in ME2. She’s now the top information trader in the galaxy, and she’s a Reaper know-it-all. Well, I’m willing to bet she knows more than anyone else.

James: James, James, James…why do you call me Lola? You’re a weirdo. He’s a very stereotypical character—all muscle and, well, he has a brain but I don’t think he uses it very often; a true meathead, not to mention he, ahem, packs a lot of meat on his body. I don’t think I’d ever “romance” him unless he shows off a vastly different side of his personality. Until then, I’ll *try* to remain “friends”, but I have a feeling I’ll eventually cross the line. I tend to do that…

EDI: I want Joker and EDI to make babies. Is that a possibility? Anyway, I need to take her out on the battlefield now that she has a body—she’s so much spiffier and I fully intend to give her as many, uh, humanly experiences as possible. Um. This just got weird.

Jack: I ran into Jack while saving biotic students from Cerberus bastards. She’s apparently a teacher now, and cares a LOT about her students. Have I mentioned she looks more badass than ever!?! God Ilove her manly personality. Hemhem that may or may not have anything to do with the fact that I believe I have a manly personality… 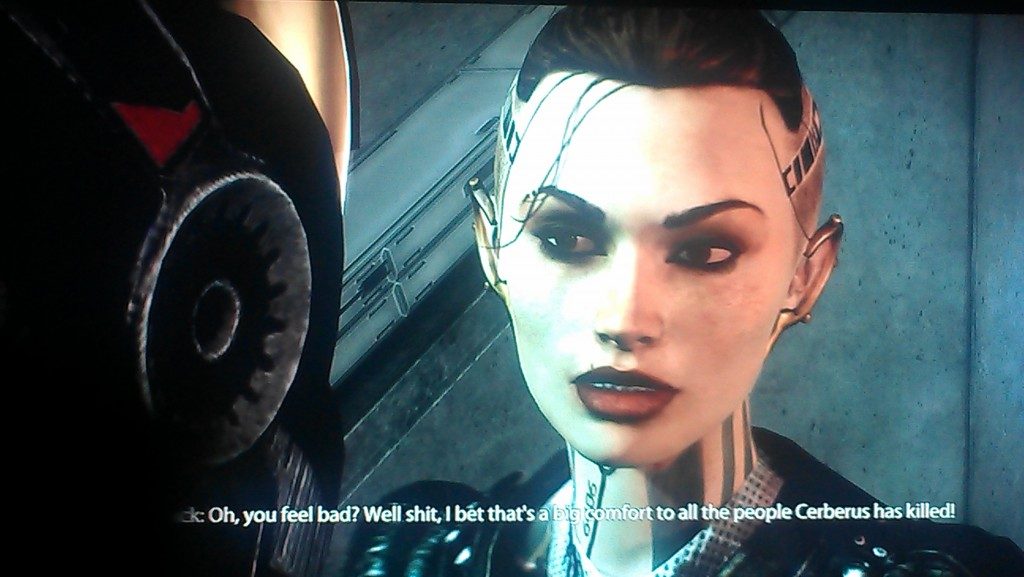 I’m not sure if she’ll ever join the crew—right now she’s listed as a War Asset or something, but it’d be nice to have her aboard. Actually, she might be aboard. I haven’t even looked. /TerribleCommander

Miranda: I met Miranda at the docking station on the Citadel. I don’t really know what her intention was other than to tell me she thinks her father has done something with her sister. She also mentioned that she was running away from the Illusive Man. For some reason I don’t trust her. But I will thank Bioware for the awesome ass-shot they provided.  Which I cannot provide for you because I was too mesmerized to take a photo. <3. 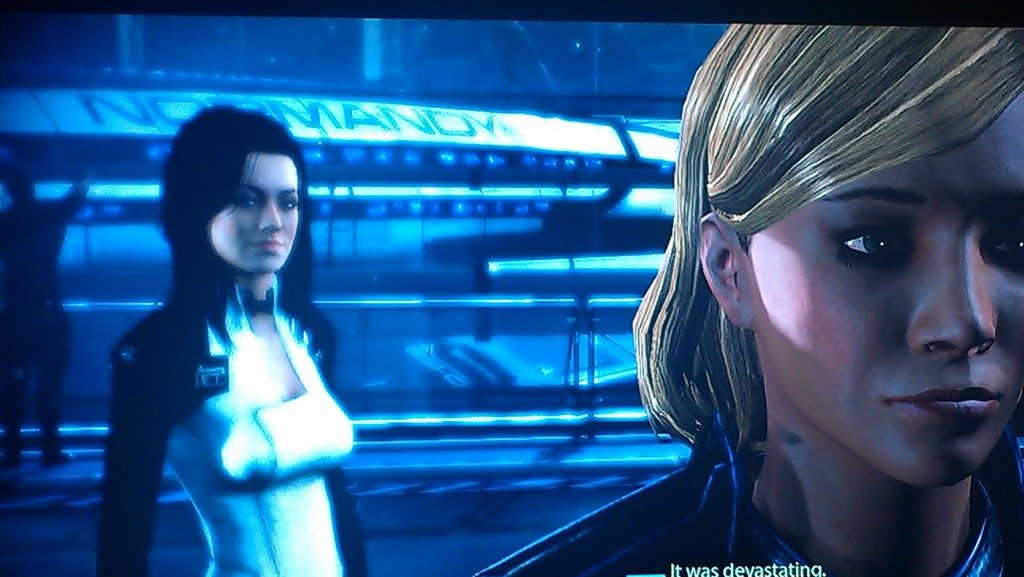 I think that about covers the characters! The next main mission is to have the meeting-thing between the Turians, Salarians and Krogans. Hopefully I’ll run into Wrex or Grunt!