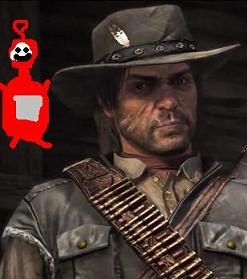 In my dream, seemingly endless acres of prairie land extended in front of me. If I stopped and closed my eyes, I could feel the land; I could hear the buzz of a nearby insect, feel the tremble underneath my feet caused by two dozen hooves of wild horses, and I could taste the humidity on this stifling summer settle on my tongue.

It was rather windy outside, and when the wind blew just right there was something else I could hear, coming from afar. I slowly opened my eyes, as if that would help me locate the source of this sound. The sound could only be described as torture in its purest form. Was it…giggling? Frustrated, I pushed my hair back behind my ears and squeezed my eyes shut. I needed to know what this sound was. It was calling to me, I just knew it.

I was snapped out of my daze when I heard a man shouting behind me. Instinctively, I pivoted my feet, ready to run if need be, and when I turned to my head to identify the source I melted into a puddle of goo.

It was John fucking Marston.

I relaxed my posture. He was in a tizzy, that John Marston, and he struggling to pull something out of his pocket all while shouting nonsense in that gravelly voice of his. I couldn’t make out a single word he was saying for several seconds. Maybe if I were to ask him he’d blame his illiteracy.

John Marston suddenly yanked out this strange, albeit familiar weapon and handed it to me and spoke his first audible sentence; he told me that we were going hunting. Fiddling with the weapon I thought, okay, we’re going hunting; I’ve done this before, in real life and in Red Dead Redemption. This should be easy.

The funny thing about dreams is that you tend to go wherever they take you. In my case, I was being lead around the fictional prairies of Red Dead Redemption by my very own personal tour guide. He took me to the top of a hill and there we perched, gazing upon miles and miles of outstretched land. We didn’t speak.

A warm gust of wind came at us, carrying that same, awful sound I had heard earlier. This time I was convinced it was giggling, and I was even able to detect demonic undertones. I opened my mouth to warn John of our impending doom——and the next thing I know, I’m fucking blasting Teletubbies into Oblivion with a Plasma Cutter.

Seriously guys, in the flash of a second we were down that hill and in the middle of a freakin’ battlefield. Teletubbies were coming at us from all angles giggling like the crazy, possessed, twisted children’s entertainment icons that they are. And it was just me and John Marston, making right in this world.