I’ve never owned a Sega Saturn, nor can I remember ever playing one. It’s not that I never wanted it, but by the time the bad boy released I was probably enamored with my newly acquired SNES, my Genesis and barbie dolls.

But here’s the thing. Throughout the years I’ve collected several hundred games, and I’ve happened to add a few Saturn games to my collection;  one of which being Panzer Dragoon Saga. For those of that don’t know, Panzer Dragoon Saga is regarded as one of the best RPGs of ALL TIMEEEE. That, and it’s rare as fuck.  I won’t admit how much I paid for it, but I paid enough for it that I should actually play it.

As much as I wish I would stumble across a working Saturn at a garage sale, I realized that chances of that were extremely slim. So, I started searching eBay last week. I had a few requirements: The Saturn HAD to have its original box, all of the cords *drrr* and I needed at least one controller.  After a few minutes of searching…VOILA! 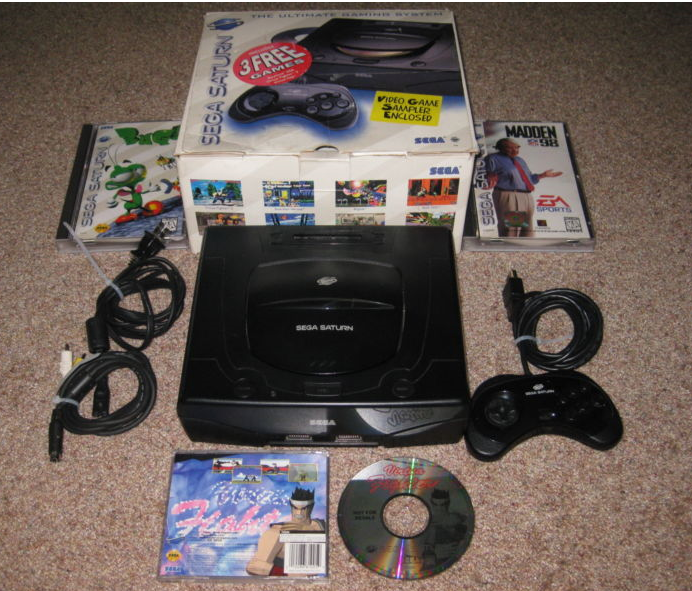 With a gift card, I only paid 50 bucks.  The games suck tit, but I don’t care. The Saturn looks to be in incredible condition (the box looks decent) and it has the cords and a controller.

Hopefully it’ll be here sometime this week! …Not that I could actually play it. My life is currently consumed by Dragon Age 2.

Maybe I’ll get to it by July.

Did you play the Saturn? Do you still own yours?