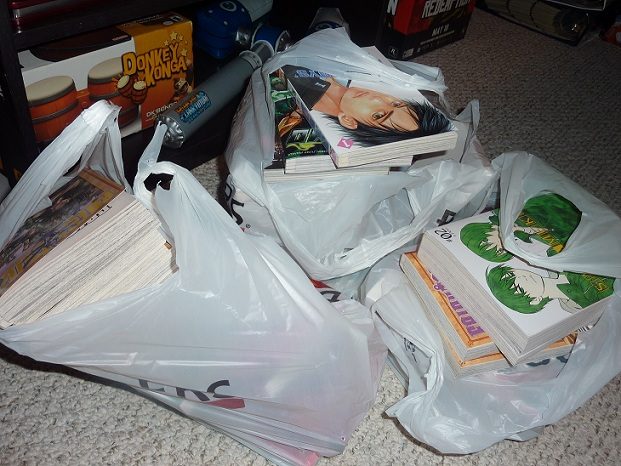 Fun fact: I love manga. Love love LOVE it. But that ish is expensive as hell (especially when they’re ten bucks a pop!) so I haven’t been able to indulge in the big-eyed and spiky-haired reading as of late. However, this *little* book retailer called Borders (maybe you’ve heard of it?) recently went out of business and, during its slow death, had an amazing 80% off AND an additional 15% off clearance.  Bottom line—each manga cost about $2.

What does this mean for me? It means over the weekend I went from owning three mangas to 41.

Seriously guys, it was like a free-for-all in there. I looked ridiculous as I was trying to juggle all of these mangas in my arm. Books were falling left and right, I was bumping into people, snatching mangas off of the case…and I mean SNATCHING (that’s such a gross word now that I think about it) as in grabbing everything I could; there wasn’t time to see what it was I was exactly snatching. (…Had to do it.)

Last night I finally took inventory, and I guess I got a little of everything:

My Girlfriend’s a Geek – Volume 2

Higurashi When They Cry – Volume 2

As you can tell, I only nabbed two first installments, so I’m going to have to find the first to many of these. But I figure it’s a good start! I think the first series I’m going to start with is Fairy Tail. It looks adventurey and questful. …Yes, questful.

Honestly, the only mangas I recognize from the above list are Bleach, Vampire Knight, StarCraft and .Hack. I have absolutely no idea what’da’fook the others are. That being said, two girls at Borders were pissed at me because I supposedly snatched (teehee) their “favorite mangas”. SURE!

Any manga gurus wanna educa-mate me on what I got?