Guys, I need to make a vlog so hard; things are starting to pile up in my woman cave  and it’s beginning to stress me out!

Where shall we begin…oh, by the way, we’re going to do this “Where’s Waldo?” style but it’ll be more like “Where the fuck is Britt’s shit?” because I’m too lazy to number everything with corresponding descriptions. (Hey, at least I’m honest, and honesty is one of the most important parts of a relationship.) 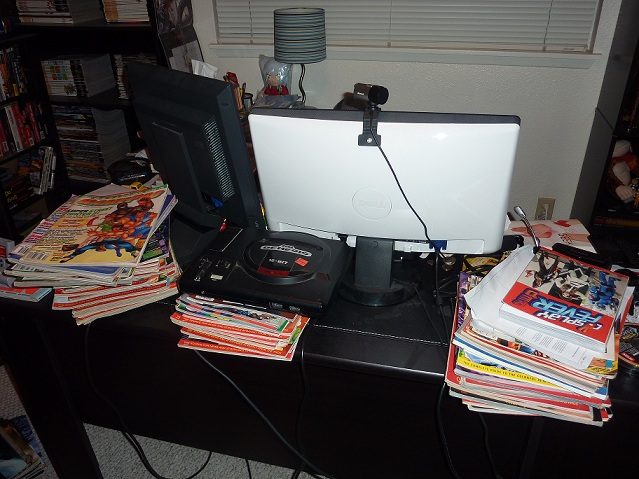 Okay, let’s start with my desk. This might not look TOO bad, but trust me it ain’t too good, either. Next to the monitor is a cosplay book I bought the same day I bought that crapload of manga several months back.  (Speaking of that, I need to find somewhere I can stick all of that manga…besides up my ass, that is. That’s where my mom told me to put it and quite frankly there’s isn’t enough room there.) I bought the book because I’d like to try the whole cosplay thing someday, but even the simpler costumes look like they require at least a Level 10 in sewing–but I’m only at a Level 1; I only have three heart containers; I’m still at the bottom of the skill tree; etc.

There’s also a sexy (albeit dusty and scratched) 16-bit Genesis I bought somewhere. I can’t even remember where I purchased that bad boy because it was that long ago. Its rightful place is on my console shelf, but alas, I can’t shelve until I make a vlog. It’s kind of like how Simba can’t take his rightful place as prince until he’s shown off at Pride Rock, nahm’sayin? 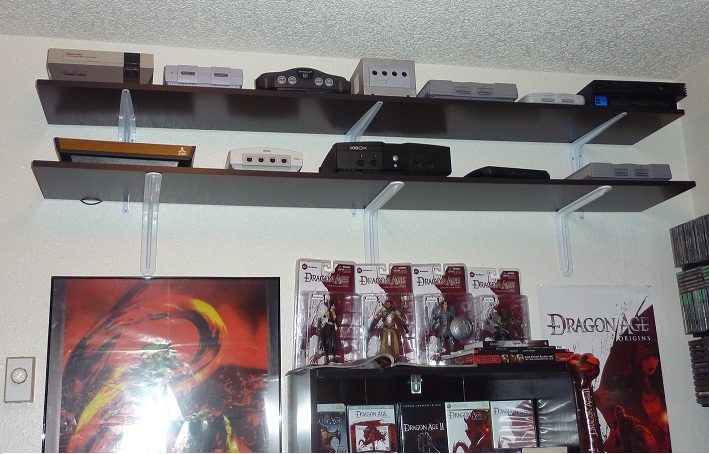 Someday the Genesis will reside upon thine shelves of awesomeness.

I don’t know if you can make it out, but there’s also an October 1993 issue of Gamepro (featuring Super Street Fighter II) on my desk. In fact, all of those magazines are old gaming issues I found at a garage sale months back–I bought an entire bin for, what, 10, 15 bucks? It was a helluva deal! But like the manga, I need to find a place to put all of the magazines; preferably a place that is not my ass.

Now for the really dirty part…

Yep. This is what is covering the floor of my woman cave. Take a moment. How many different items of nerdery can you spot? (Hint: this is where the “Where the fuck is Britt’s shit?” game comes into play.)

I see my zomBcon swag (from Halloween weekend, mind you), an NES Power Pad, more gaming issues from the aforementioned garage sale, the Uncharted 3 Collector’s Edition (that I have yet to open), about 15 boxed N64 games I found at yet another garage sale…hmmm. I also see the Skyward Sword cloth map that came with the Collector’s Edition of the guide and my Arkham City Collector’s Edition box. Oh. There is my free OnLive console I haven’t opened yet either.

But here’s the thang-a-lang: Once I make a vlog I have no idea where the heck I’m going to stash this stuff! My magazine shelf can’t hold another magazine, my game shelves don’t have the room for 15 or so boxed N64 games and I can’t think of an adequate home for the Uncharted and Batman Collector’s Editions. I mean, this isn’t necessarily a bad problem because it means I’m drowning in awesomeness, but it makes my woman cave look dirty. And stuffed.

SORRY. I couldn’t resist using “woman cave” and “stuffed” in the same sentence.

I’m putting it out there RIGHT NOW that I will make a vlog this weekend and it will happen because I’m telling you it will happen on my website. Therefore I am now accountable.

Hold me to it!