I know, I know. There are many of you who are like, “RAWRR ANOTHER Five Nights at Freddy’s?!” but I, for one, find this shit fascinating because I have nowhere near the amount of balls required to play these games for a second longer than, like, five, and thus I find them entertaining as shit. They’re kind of like scary movies I’ll never watch even though I really really want to.

I…am I even making sense? I DON’T KNOW ANYMORE. 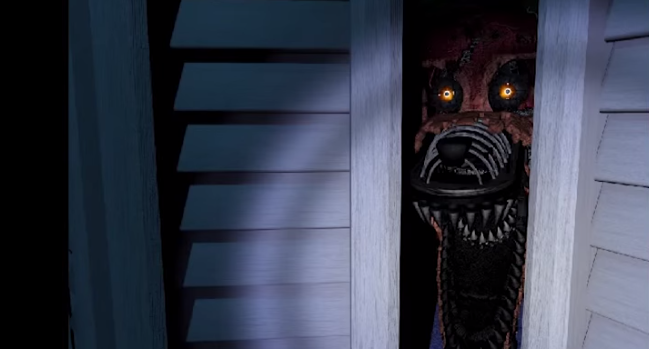 The security office has been ditched for a house (seeing as, y’know, it burned down) , and you have tons of crazy animatronics at your house…because…reasons? I mean, seriously, who would have these things laying around, unless they sorta-kinda made their way there themselves in which case it’s even fucking scarier than I thought.

Is it just me, or does this one looks leagues more frightening than the others? ajkdjfakjfdkajfdkjafdlkjfaldsjf;als SOMEONE PLAY AND LET ME KNOW HOW IT IS. BE BRAVE, SACRIFICIAL LAMBS.