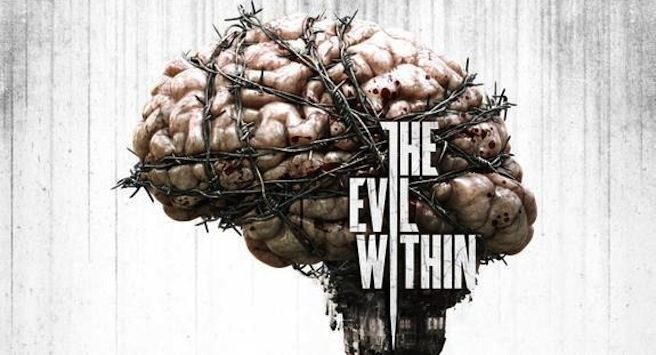 I’ve stated numerous times that the PAX East presentation of The Evil Within left a mediocre taste in me’ mouth (read that with an Irish accent plz) but I STILL had high hopes for the game. I mean, it looked like it had the potential to become a cult classic — and hey, we need more cheesy survival horror titles in our lives. So, I chalked it up to a poor choice of a demo presentation and made sure I booked some hands-on time with it at E3, to either confirm or refute my chalkage.

Okay, so Bethesda are smart people. Generally the walk to a demo kiosk is bright-lit and, you know, normal. BUT NO. Not for The Evil Within. To get to the demo station I had to walk down this pitch-black hallway, which alone is enough to scare the piss out of self-proclaimed pansies like yours truly. AAAAND of course I had the privilege of putting on a nice fancy headset that perfectly delivered every creak, scream, groan, etc. Yay.

My demo started in a courtyard in front of a large house. Hmmm. How do I describe it. Picture a calm, sunny spring day filled with the sounds chirping birds and the colors of vibrant flowers and gorgeous trees. Now, imagine children enjoying a picnic in front of an adorable cottage with their new and oh-so-fluffy puppy, Rover. So nice and inviting, isn’t it?

Now kill all of it with death and destruction. Then kill it all over again. Got the mental image? Good. That’s what the courtyard and house looked like.

After romping around the cold and least-inviting courtyard I’ve ever been in (and coming across several boxes of ammo) I nutted up and entered the house. Y’know, now that I’m thinking about it, it very well could have even been a mansion. Anywho, immediately upon entering the house-sion I saw two people walking away via an adjacent door which was closing behind them. And of COURSE it was a huge-ass door that screamed, “YOU CAN’T OPEN ME SO DON’T EVEN TRY SO EXPLORE OTHER ROOMS AND SOMEHOW YOU’LL EVENTUALLY OPEN ME.”

I have to mention Resident Evil at this point, specifically Resident Evil 1. Remember the Spencer Mansion? That’s the best way I can describe the interior of this place.  It was old and rundown with numerous rooms, corridors, nooks, etc. One room I came across was some sort of lab, another was a bedroom, and another an office. I’m not sure how detrimental this location will be to the game, though. (For what it’s worth, the demo started on Chapter 8 and Sebastian said he thought the place looked familiar.)

My demo ended when I was drug into and ultimately torn in half by some meat-grinder-esque machine. I could have saved myself, but I fucked up. Yeah. That sucked. Although I never discovered what it was I was supposed to be doing (besides surviving) I assume I was chasing after the people I saw upon entering the house-sion. For 25 minutes I basically explored, fought off enemies and gawked at the scenery and it was rad.TAKEAWAYS! 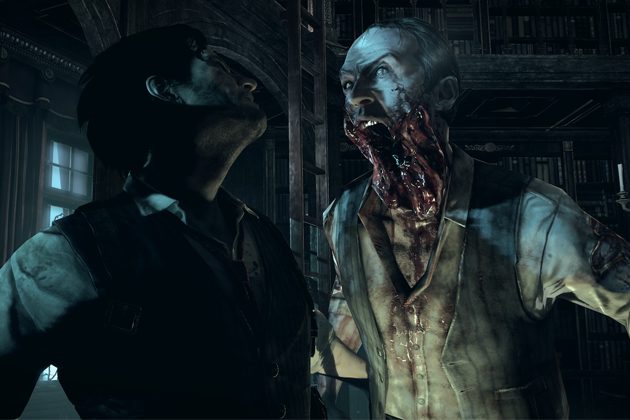 First of all, the game is freaky as fuck. I will NOT be playing The Evil Within with headphones. Nopenopenope. The music is straight-up eerie, the groans of the monsters are creepy as hell, and you can freakin’ hear them in the next room gnawing on whatever it was they’re feasting on. It doesn’t help that those mofos are tough as hell, too. Shots to the head didn’t even bring them down. So THEN you’re dealing with the “These guys are WAY fucking stronger than I am” fear aspect as well. Oh. They break down doors, too. And I can’t forget to mention the little girl giggle I heard.  I never found her, though. 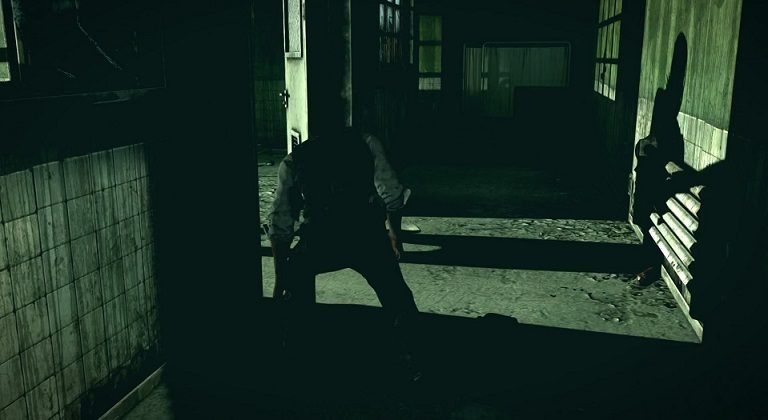 It was extremely satisfying to wander about and explore. There’s a nice amount of detail in the level design, and chances are you’ll stumble across ammo, documents (SQUEE!), weapons, bottles (for distraction), etc. in the process. It’s a win-win. 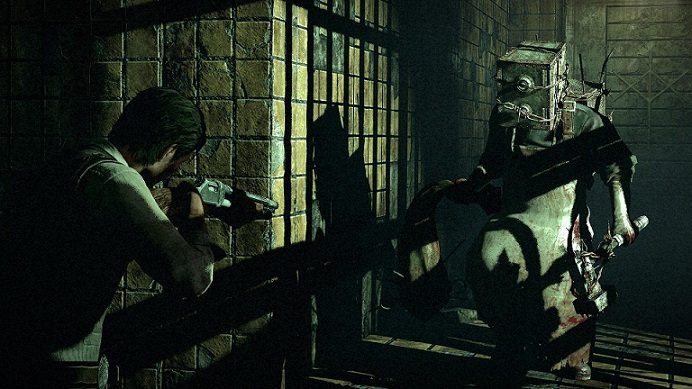 I’ve heard several complaints about the controls, and while Sebastian isn’t the swiftest character in the world, I only encountered minor issues when I was surrounded. Then again, you aren’t supposed to allow yourself to become surrounded. Sebastian isn’t a ninja, after all. You’ll need to reply on good aim and/or traps and distractions if you wan’t to escape scathe-free. I’m notorious for having an antsy trigger finger and for having terrible aim, so I tried to rely on my melee attacks AAAAAND it, uh, it didn’t go very well. Then again I was using my pistol to whip things, and not my axe. That probably would have made a difference.

I’m really happy I was able to demo The Evil Within (and um that Bethesda was gracious enough to let me in 30 minutes past my scheduled appointment) because now I’m much more confident this will turn into a thing I will enjoy playing. In the daylight. Without headphones. In an open area where I can see everything going on around me.

If I didn’t cover something you have questions about, let me know! I also found the demo I played on IGN — and hey, it ended with the same death!