I finished running the errand for that elf in Kirkwall, which, true to Dragon Age fashion, required the slaughtering of about 15 thugs. A cutscene was then initiated (one of many to come, I’ve been told) and in it, all of my efforts in Dragon Age: Origins was summed up in a few seconds. While I can’t remember the exact wording, it went something like, “The awesome hero of Ferelden pwn’d the Darkspawn. She married a handsome firecrotch, who happened to be a king. The end.”

That’s right kids, 70 hours of gameplay was wrapped up in a few short sentences, and while Mariane, Bethany and my old hag of a mother were working off their debt in Kirkwall, Elissa defeated the archdemon. THANKS FOR NOTHING MARAINE. What kind of name is Mariane anyway? (I’m going to forget that I’m the one that approved that name…) 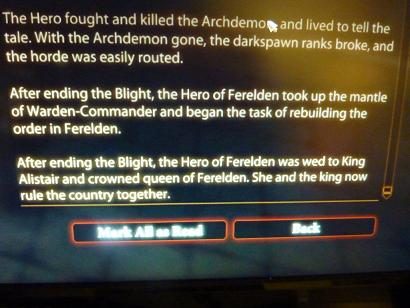 Well, that’s that. I need to remind myself that this is NOT Dragon Age: Origins, but an entirely different game. But still, I can’t help but be a little sad. How cool would it have been to travel to Ferelden during the midst of all that chaos and experience it from a different perspective? The only way my disappointments will be undissapointed (yes, I just made that word up) will be if I can truly experience some post-archdemon events. Ferelden better be a part of this game.  JUST SAYING.

Also in the cutscene (oh, just a warning. I took really shitty notes, and I’m writing this three days after playing. I’m probably off.) Qunari apparently landed in Kirkwall?  If this is the case, maybe I’ll see my Stenny-Sten-Sten? <3. Also, the templars are drunk off of power or some shit. It sounds like they’re clamping their hold over the mages.

And because the templars are acting like they have a stick up their ass, Mariane and Bethany are looking for a way out of Kirkwall, which leads me to Varric. First of all, can I just say that I think I love his brother?—oh, bummer. I tried googling his name and came across a thread called “Should I kill Varric’s brother or spare him?” FUCKING SPOILERS. But that was my fault.

Anyway, I can’t remember his name nor read my handwriting. Bartrin? Is that his name? Whatever, anyway, I love him because the first thing I heard him say was “Andraste’s tits!” Bahaha. I also codex-stalked him and he seems like a good dwarf. But now that I know I’ll eventually have to make a “kill or not to kill” decision, who knows.

Anyway, this Bartrin guy won’t let the Hawke’s go with him into the deep roads for an expedition. (I hate the deep roads. I had my fill and THEN some of them between Dragon Age: Origins and the DLC. It’s a boring location, despite its rich history. Tons and tons of rocks, tunnels and Darkspawn.  Wee.) And if I can remember, Bethany and Mariane want to either escape while they’re in the deep roads or try and find a valuable treasure to buy their way out. Either way, I have a feeling I’m venturing into those bad boys again.

My guess is that I’ll come across Darkspawn at one point or another, and people will be like, “ZOMG HEY! DARKSPAWN! I thought these were dead because we’re from Kirkwall and we’re stupid!” OR, maybe we’ll try to escape, therefore potentially killing  Bartinorwhatthefuck, or we’ll find something valuable, sell it, and move on to another location.

I don’t know what to think of Varric. I know little about him, other than he’s Bartrinorwhatthefuck’s younger brother, he’s a rogue, he named his crossbow Bianca (Bianca is such a dwarven name. I’m guessing it’s his dead, or presumed to be dead, lady friend or wife. Maybe he named it after a pet Bronco. That’d be hilarious) and he’s the one narrating my story, so to speak. He seems like a likeable character though, unlike Aveline. I don’t know if I spelt that right. I’m too scared to Google it.

OH! I also read in the codex that Carver was Bethany’s twin. #random

Now, onto best and most important part of Dragon Age II thus far:

EFFIN SANDAL IS BACK.

You can see my excitement in my notes: 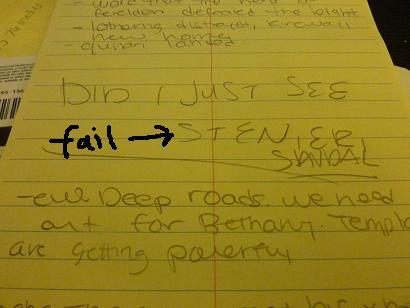 Oh man, I love this kid. I was super happy when I saw him in Witch Hunt (confirming that he and his father survived DA:O) and watching him scratch his ass as he says “I like enchanting” made my day. His and Bodahn’s face look different, which I totally understand is due to boost in graphics, but I have to admit, Sandal looked possessed. And Bodahn’s voice was different. He went on to tell me about his travels with Elissa and that he’ll pretty much be stalking me throughout the game .

DA2 fucking CHUGS on my computer. I don’t get it— DA:O ran incredibly smooth, so I can’t understand why DA2 runs like utter shit. Maybe Kirkwall is too much stimulation for it, but I literally have to stop moving, stand still and look at my surroundings before I venture anywhere. Otherwise it’s too damn choppy to wander around. The only saving grace is that the cutscenes look beautiful. If those were choppy as well, I’d have to commit hari-kari.

I stopped playing DA2 as I was wandering around Kirkwall. I’m looking for weapons, armor, etc. For whatever reason, Bodahn wouldn’t sell me his shit. Bastard.