Hey, so, remember that thing that happened…oh, I don’t know…about two weeks ago? It was called Black Friday — yeah, thought that would ring a bell. Well, in any case, you remember it now and that means I can continue on with this blog post!

So per the norm, my friend Erin and I ventured about on Black Friday. I bought lots of things. Lots of things I don’t need, but nonetheless they are things I wanted.

Who am I kidding? These things — I NEEDED ALL OF THEM!!1 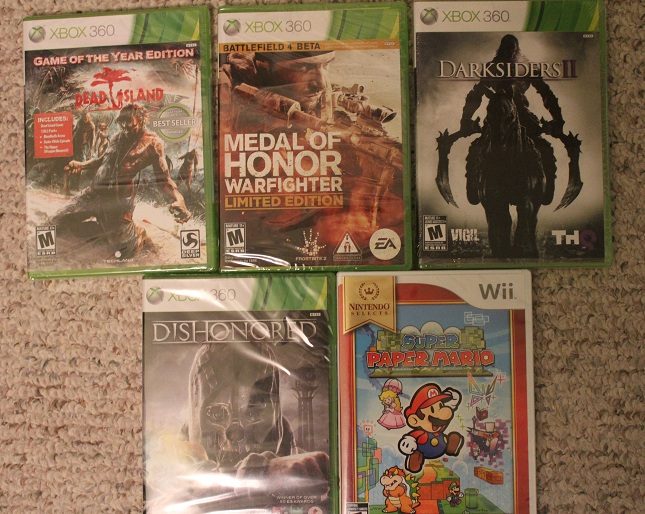 ::parades around and does a happy dance with all of my new videogames::

Dead Island: I haven’t given Dead Island a fair shake. I mean, it’s a game centered around surviving a zombie apocalypse — which includes surviving against hot zombies in bikinis — and it’s like, I haven’t played enough of this WHY?! Because I didn’t own my own copy, that’s why! But  now that I own a copy of Hot Zombie Island perhaps I can do some awesomesauce co-oping with some of you and bash skulls. This bad boy was $9!

Medal of Honor Warfighter: I’ve always been a Medal of Honor fan — my dad and I have some very fond PS1/GameCube co-op memories stemming from these games. So when the series was “spawned” again in 2010 (daayamn, I can’t believe it was that long ago!) I was all over that ish. While it had its faults, I thoroughly enjoyed the game and story (yes, I’m one of those weirdos who plays even FPS games for the story). For $35, one can’t go wrong! (Or so I hope!)

Dishonored: Um, yeah, hi. It’s Dishonored. ‘Nuff said. HA! But for serious, I’ve heard a LOT of “ZOMG THIS GAME IS SO AMAZING I’M GOING TO PLAY IT AT LEAST TWELVE TIMES!”-esque comments coming from a buttload of you, so naturally my curiosity is piqued. It looks like a lovechild between your mom and Bioshock — SOLD! $25!

Super Paper Mario: Paper Mario is one of my all-time favorite games EVAR. That being said, I never, um, finished it. UGH. I just remember having a lot, a LOT of fun with Paper Mario so when I saw Super Paper Mario being sold for $15 I was like, “What the hell! I’ve already dropped $[censored] today, what’s an additional $15?!!” /broke

And those, ladies and gentlemen, are the video games I bought on Black Friday.

But never fear, for the shopping didn’t stop there! Per the Britt-norm I bought a lot of other unnecessary random stuff that I will share with you shortly.