Mr. Penguin was using signal jammers, so I wasn’t able to hack my way into the museum by using my handy dandy thingamob (I seriously need to learn the names of these things. I just know what order they are in on the d-pad) therefore I wandered all around Arkham City in order to destroy dem bitches.

After all three were destroyed, I finally made it to the museum. Um, I just need to tell everyone that I really, really enjoyed exploring the museum. Maybe it’s because I haven’t been to one in a while, but I had a LOT of fun looking around and exploring the exhibits, as well as listening to Penguin’s lil’ explanations for each exhibit.

I quickly found out that some undercover Gotham City dudes from the 13th precinct had been discovered and held as hostages. Lovely. As I made my way deeper in the museum, I finally came into conatact with Cobblepot. He was holding an initiation of sorts for thugs that wanted to join his crew, and I went up against an asston of them. <3. Obviously that wasn’t meant to be too big of a challenge, so Penguin through in that other Siamese twin, and what ensued was like a late-game boss battle in Arkham Asylum. I pwn’d, Penguin left. 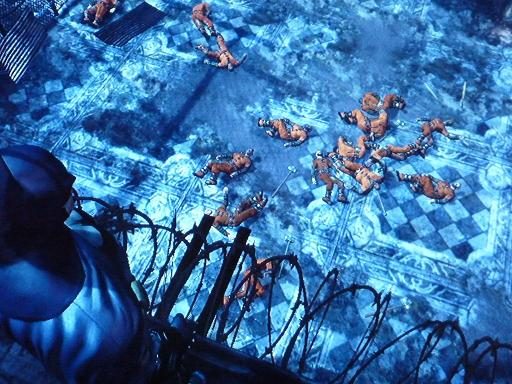 A few moments later I walked into this freeze room and Penguin shot my arm with Freeze’s freeze…gun? Yeah. That. He then left like a little bitch, but not before freezing a few other cops. So, I was a nice Batman and saved the cops and sought out Mr. Freeze. 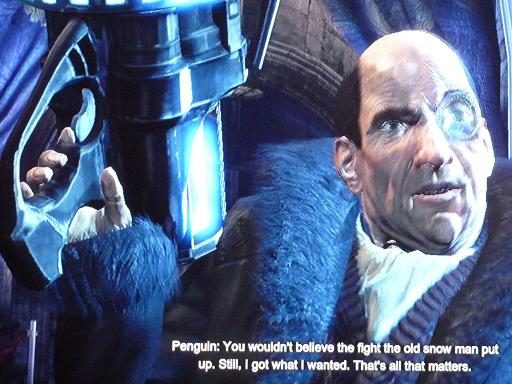 I found him in a display case. And to be honest, I didn’t even know that was him. I don’t think I’ve seen him outside of his suit, so it was kinda weird seeing him all old and vulnerable. I thought he seemed like a cool dude…I mean, he was a little weird, but cool. For now. As soon as he tries to kill me I will take a blowtorch to his ass. Anyway, Freeze told me that he had a Disrupter Freeze Override-thing in his suit that is “used to remotely disable custom designed freeze gun weaponry.” CHYEAH.

I found his suit, equipped myself with the ish and, once again, sought out Mr. Cobblepot. 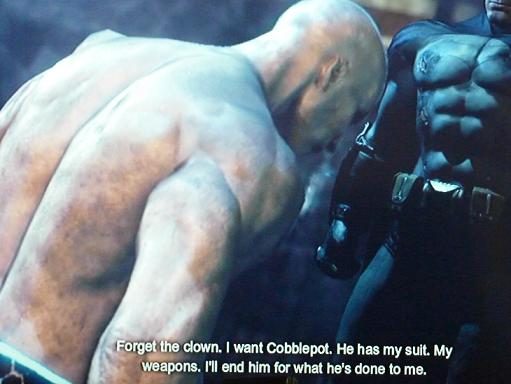 Penguin-Poo wasn’t a match for me once I disabled his ish, and I delivered a swift punch to this face annnnnd that was great and all, but then he blew up some shit and I suddenly found myself a floor below facing a horrendous beast called Soloman Grundy. Definitely not someone I want to wake up to in the morning. The fight that ensued with Soloman was quick and easy, and after he was put down I again punched Penguin in the face. Perfect.

I then met up with Freeze, who told me that there actually wasn’t a cure ready; apparently the cure degrades too quickly and it needs a restorative element, an enzyme and human DNA to bond with. NO PROBLEMO! Batman knows that Ras al Ghul dude, albeit dead, has been exposed to that enzyme for centuries. While Batman and Freeze were having this lovely convo, a ninja lady in a display case woke up (according to Penguin, she pwn’d several of his men earlier which is why she was locked up) went batshit, jumped out of her display case and ran off saying something or another how Batman isn’t worthy of seeing him.

I know jack shit about this lady, but I guess she’s part of the Leage of Assassin’s, which is what Ras al Ghul is (or was?) the leader of. Or maybe he’s dead but immortal, so he’s still alive. I don’t fucking know how this stuff works. Anyway, dumarase lady (whose name is Talia) cut herself on the glass while jumping out of aforementioned case, leaving Batman evidence to scan and track her with. NOW, I read her bio, and Talia Al Ghul is the daughter of Ras Al Ghul. Ras has orchestrated a relationship with her and Batman, and Talia is Bruce Wayne’s on/off again lover. Brown Chicken Brown Cow.

Ho-kay, so I was tracking this broad WHEN ZOMG ROBIN CAME TO MY RESCUUUUEEE. I don’t know why I was so excited to see him, but I definitely squealed like my eight-year-old self when I saw the Backstreet Boys in concert. He gave me the line launcher, and Batman was kind of a douche and basically told him to piss off; he told Robin to search the hospitals for patients that have tained blood like himself. THANKS JOKER. Robin flew away. …see what I did thare?! HURRRRR.

Tracking the ninja led me to the sewers (mmmm) and Jokers men were already there, hunting the rest of Penguin’s men. Random: While I was down there, Strange made an announcement that Protocol 10 would begin in five hours. When I first started the game, the countdown started at ten hours.

While searchin’ the stanky tunnels, I saved a damsel in distress, a nurse named Fiona somethin’ somethin’. She was kidnapped simply because she was a nurse, and Strange thought she could help Joker. OH. About that, Strange is supplying Joker with TYGER weaponry. Sounds to me like he’s trying to control who runs ‘dem streets, nahm’sayin? It’s a political clusterfuck!

Eventually I made it to Wonder City (before this, Batman had a few “attacks” due to the poison)…and WTF is Wonder City? It sounds like it was supposed to be the “future of Gotham City” but it looks like it failed miserably. There were a bunch of mech guardians and stuff. I scanned their data, found out where the ninjas were disappearing to annnnnnnnnd promptly turned the game off. I had a Husky football game to watch. <3.