You haven’t seen my woman cave lately, have you? Well friend, take my hand, and I’ll personally give you a photo tour. 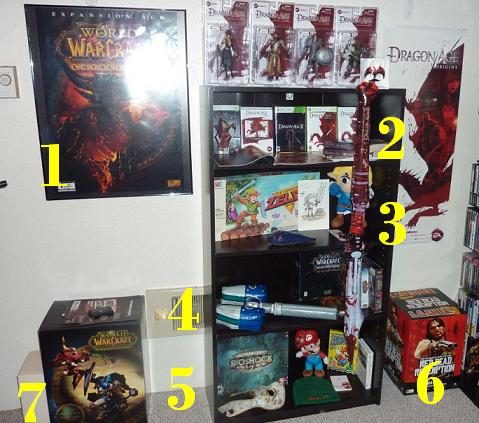 1. When I went to Best Buy to purchase WoW: Cataclysm, the greeter dude asked me if I wanted a poster. Duh. I would have taken the cardboard display, too, but he didn’t offer. Jackass.

2. Welcome to my mini Dragon Age shrine. It currently contains the action figures of Morrigan, Duncan, Loghain and a Genlock, four  copies of Dragon Age: Origins, one copy of Dragon Age 2, the Game Informer magazine that featured DA:O, the two DA:O novels, The Stolen Throne and The Calling, a DA2 inflatable sword, a packaged DA2 inflatable sword and two DA2 tattoos. There is also the DA:O poster to the right. There were a few things I couldn’t fit on the shelf (like my PC copy of DA2, a tabletop DA:O game and the Collector’s Edition guides) but in time, I’ll get a bigger shrine. >)

3. This is another mini shrine, but with ZELDA STUFF! Again, my version of an ideal Zelda shrine would include all of the games, guides, etc., but I had limited space to work with. You’ll see a Zelda board game (which I’ve never played, but I think that needs to happen), an Ocarina of Time replica I made in 12th grade, a custom drawing of Link pulling out the Master Sword, a Link bookmark and a Link plushie! <3333

4. This is a random shelf. I’ve never played Ratchet and Clank before, but I know that inflatable hamer looking thing is from one of the games (I got it in a swag bag back in PAX ’09) and it’s fun as hell to whack people with it. Next to that is the WoW: Cataclysm Collector’s Edition, and next to that is WoW: Wrath of the Lich King, WoW: Battlechest and just plain’ ol WoW.

5. Here’s a Bioshock 2 Collector’s Edition (which is still unopened) along with a signed Splicer mask I won at PAX East last month. Next to that is a Mario and Luigi: Bowser’s Inside Story beanie I got at PAX Prime ’09, a random Mario plushie, Super Mario television episodes, a Mario notebook and two “pre-order special” Super Mario Galaxy gold coins.

6. Haaaa. Okay, so while I was playing Red Dead Redemption I decided I needed to purchase some merchandise. Why? Because I was obsessed. Apparently, I thought a huge promotional cube would be a fantastic addition to my future woman cave. I think I made a good choice.

7. I have a effin’ sweet WoW statue my friend gave me (Thank you Rich!) and…this is the empty box. YIPEE! The statue is on another cabinet. YOU CAN’T SEE IT YET.

I’ll get a few more photos up as the week goes on! I hope you enjoyed your tour. Donations are gladly accepted in the form of hot wings and/or bottles of Frank’s.