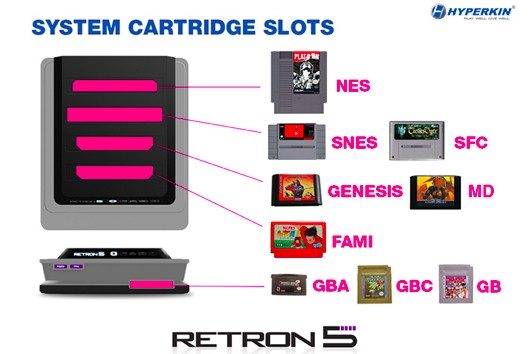 Admittedly this thing’s delayment (is that even a word? IT IS NOW) was announced in September, and even then it supposedly wasn’t a true delay because Amazon’s October 31st release was just a placeholder blahblah POINT IS the RetroN5 is launching on December 10th. Groovy? Groovy.

Anywhoooo I’m here to alert you to the presence of the RetroN5. Because it is awesome and it will be one of the best things ever to grace the inside of my apartment. Now, assuming you’re like me and have cartridges lying around as far the eye can see and penis can reach (what?) it can be quite the hassle to ensure the corresponding console is properly prepared for engagement. HEY! Want to play Super Mario World? Let’s get the SNES out and all of the cords! That was fun! Now, let’s play some Sonic. WHARE’Z MY SEGA?! BUT NOW I WANT TO PLAY POKEMON ON MY TV. ZOMG NOW I AM TRAVELLING AND WANT TO BRING GAMES WITH ME BUT I DON’T WANT TO LUG AROUND ALL OF MY CONSOLES! MY LIFE IS SO INCONVENIENT AND SUCKS.

Right. While that may be a bit dramatic, I think I, erm, made my point. I’ll mostly be using this bad boy for travelling purposes, because who wants to go on a real vacation and see the real world when you have a video game console that can play nine different platforms in one? Exaaaaaaaactly.

If you’re interested in a RetroN5, I’d check the Amazon listing as the date draws near! I think I paid $99 for mine.

So, yeah! Would you be interested in one of these?