I spotted an ad on the Xbox Dashboard titled “Zombiemania” or something along those lines. All I know is it alluded to “OHAI! Select this ad and we’ll show you a bunch of ZOMBIE STUFF ZOMG BRAINS EXCIIITEEEE!!!” I typically ignore these types of things, but uh, hello, we’re talking zombies here.

The ad lead me to a bunch of zombie related things—trivia, games, indie games, add-ons, films, tv shows, etc. I thought, okay, I’ll give a shot at this so-called zombie trivia—for I must flex my zombie knowledge and prove to myself that I am a studly woman and zombie guru.

Here is one of them: 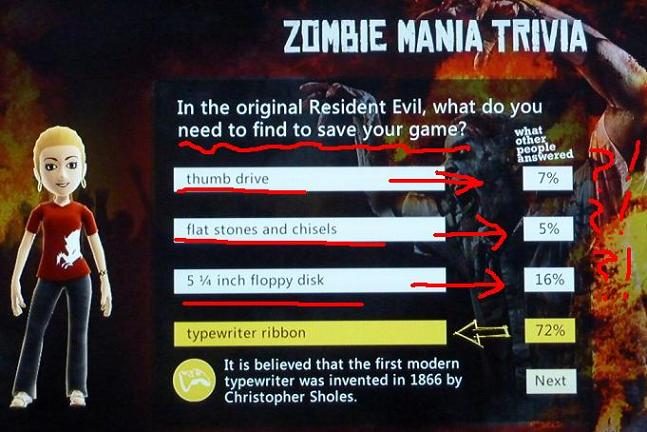 But for reals, I get it—not everyone grew up with a NES/SNES/PS like I did. But for one not to know of the legendary ink ribbons—URK! It kills me inside! Anyway, I guess this was a nice, friendly reminder-esque slap in the face that there’s a whole ‘nother generation of gamers out there. Kiddos who grew up with the PS2, PS3, Xbox 360….k-kiddos who have NO idea WTF an “old-school” Resident Evil game is…kiddos who don’t know WHAT A JILL SANDWICH IS.

Now if you’ll excuse me, I must grieve.