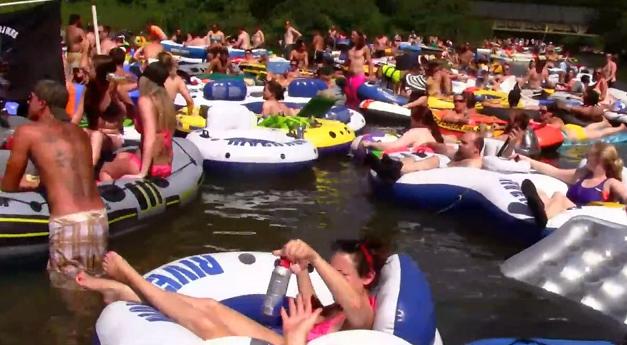 Sit back and relax, kiddos, because I have a fun lil’ story for you. (I mean, with a title like “Near Drowning and Dovahkiin” how can it NOT be fun?) Last Saturday was The Super Mega Epic Float Extravaganza. As you can clearly see by the photo above there were a LOT of people in attendance — in fact, over 600 people were “confirmed” on Facebook — and we all got together for one purpose: to drink and float down the Yakima river.

Sounds totally safe, right? Well, safe or not, it was an absolute blast. My buddy and I headed down the river in an AMAZING double person tube (we learned last year that getting single, $5 tubes at Walmart days prior to the event only resulted in epic failure), we had a built-in cooler filled with beer, water and snacks — we were pretty much set. Anyway, the first half of the float consisted in fun and safe tomfoolery (“safe” meaning drinking beer after beer in the 90 degree weather while the ice cold water rushes underneath your float) and everything went down without a hitch. About halfway through the float most folks stopped at a beach to chill, drink more (yikes), jump off of cliffs and bask in the smeltering heat. 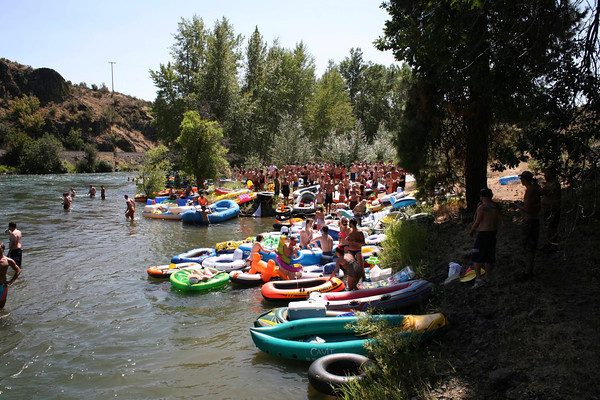 About this time, I, admittedly, was feeling good (probably a little too good) and therefore the the events that followare kinda, erm, blurry. But I remember having my photo taken with a group of strangers. Kind of. I only remembered afterI saw the photo on Facebook…

So yeah, I had apparently drank too much (only a few beers and a swig of Jack Daniels, actually, but it was HOT outside and I was probably dehydrated :/) but nonetheless, my buddy and a few new friends and I decided to hit the river again and make it down the second half to the safety of our cars (and designated drivers). Now, I’m not sure how much longer the float itself lasted, but before I (and everyone else) knew it the “drop off” point (where we were supposed to get our asses of the river) was immediately upon us.

And it was on the other side of the river.

Now, this sucked because somewhere up ahead there was a dam that had been promised “to wreck” our “lives” should we continue past the drop off point. Okay, so we missed the drop off point — this wouldn’t have been such a huge deal had we known where the dam actually was. As far as we knew it was 50 yards down the river and we had seconds to bail before our lives were “wrecked”.

I remember looking longingly at the drop off point, hearing my buddy yell “Okay, we gotta bail!” and BOOM — I was suddenly underwater. And my knees were scraping against the rocks below, I was ingesting gulp after gulp of water as I struggled to get air, and, holy crap, someone had me by the arm and was trying to drag me upstream. Everything had went down so quickly I didn’t have time to put together what had happened until I found myself struggling to stand in shallow, swift running water. I don’t even remember seeing the intertube being whisked away down the river.

In a matter of what felt like seconds I had gone from floating in my intertube to standing in the middle of a swift river, clutching my friend, looking for a way to get onshore. Being a little more than buzzed definitely did not help matters.

But, I, Brittney Brombacher, am never one to forget my roots, and as I was being pep talked about how I needed to cross the river (aka I needed to swim with the current and grab onto a big branch that was sticking over the river in order hoist myself onshore) I looked up at my friend and, stone-cold serious, said the following:

“If Dovahkiin can cross rivers in Skryim, I can do this.”

And holy shit, my feet were slipping on rocks and I was in so much pain but dammit I finally made it onshore. Now, having to cross logs and crawl on all fours to make it back to the cars is another story in itself, but the nerd references end here, so this post will as well. But yeah. Good to know when I’m facing danger the gamer part of my brain never turns off.

Also… I DO NOT CONDONE DRINKING AND FLOATING. (That just sounds like the responsible thing to insert right about here.)