As you may or may not be aware, that hoarder-esque room you see above was once my Woman Cave. It was a jolly place to blog, work and simply thrive in (except when spiders the size of 50 cent pieces would crawl out of cracks) (yes, to us WA folk those are huge) but I had to tear it all down and upgrade my dwelling.

But now, in my new dwelling, the Woman Cave has evolved into the…Woman Apartment. Yes, due to extreme volume the items and paraphernalia has oozed out of the new Woman Cave and flooded into the living room. And holy shitsticks it’s a lot of work O___O like, I don’t think I quite understood the undertaking that moving would be. I moved, what, several weeks ago but the amount of work that still needs to be done is over-fucking-whelming. >___<

I’ve made some progress though, and thought I would share! 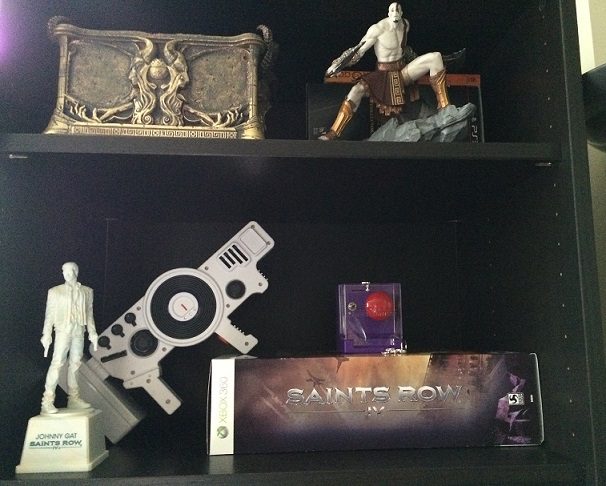 This shelf is by my window, next to the TVs. Unfortunately the shelves are screwed in and I was far too lazy to unscrew each shelf-holder thing, so I had to scour my collection and find stuff that would fit the preset shelves. I’ve had the God of War III CE since launch, but I’ve never unboxed it until now, and same goes with GoW: Acsension’s CE. Obviously we have Saints Row IV beneath that, and I think the Dubstep Gun is the best thing that has EVER come in a special edition. I think I’ve almost run the batteries out. 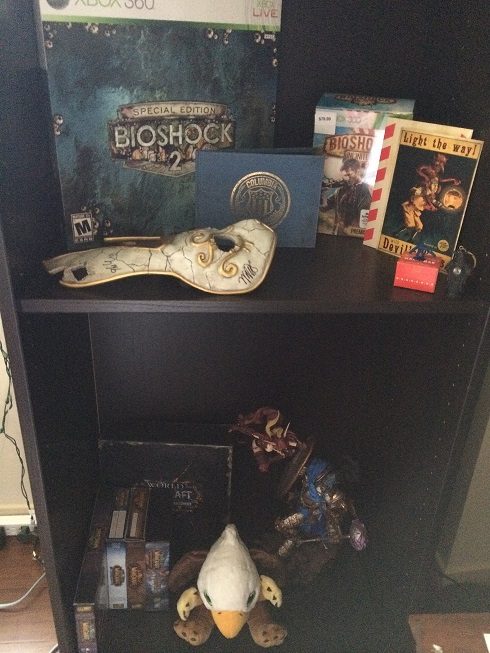 These shelves are still a work-in-progress. Most of the content from the Bioshock shelf comes from Infinite’s CE. The BioShock 2 Special Edition hasn’t been opened yet (I was going to remove its contents for display purposes, but I think most are posters and whatnot so it wouldn’t work) and I won the signed Splicer mask at PAX East back in the day. Anywho, I have a copy of the original Bioshock I need to get up there.

The WoW shelf beneath that also needs more content. The main reason I chose this place for my WoW stuffthings is because of that statue in the right corner. It’s hard to tell from this angle, but I’d say it’s nearly 2 ft. tall and I couldn’t find ANYWHERE to put it because it’s effin’ huge. 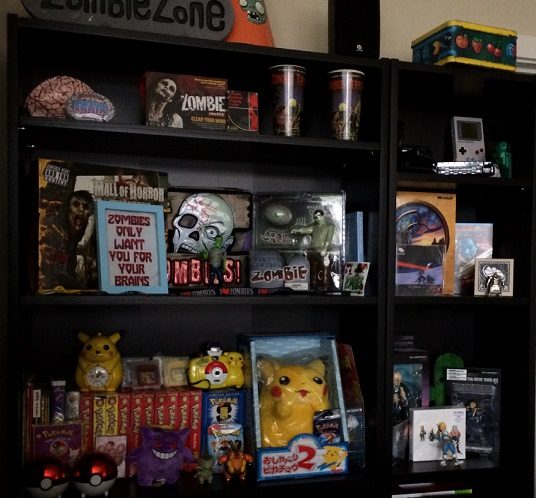 These shelves are essentially an overflow of stuff in the main office. It was important for me to have my favorite games in the office (since that’s where I spend most of my time) but to do that I could only take a few things from each collection and had to put the rest into the living room. So, we have the zombie stuff on the two shelves in the upper left, and below that some Poke-MANz (as I mom would call it). The top right shelf is just filled with handhelds, and the shelf below that is a little Asheron’s Call shrine — which is totally an MMO you should play someday. It’s super old-school, challenging and the options for customization are crazy. And of course, below that is a mini FFIX shrine. Y’know, action figures, Cactuar plushy, soundtracks, etc.

Now if you’ll excuse me, I have some Diablo III to tend to. Also, my ass has a date with my couch and I heard it could go all day long.

What are your plans this weekend?