This log will cover the past, oh, week or so of progress I’ve made. You see, ladies and gentlemen, the Blonde Nerd is so enamored by Mass Effect that all she does is drool on her controller and fantasize about making sweet, passionate outside-space love to Kaidan Alenko. OH. But Kaidan Alenko like, NEVER shows his stupid face anymore. Oooh no. Now that he’s a Spectre he’s too good for me. But I was good enough while he was hospitalized, wasn’t I?! I ASKED WASN’T I, KAIDAN ALENKO!?!?!!!!

I’ve spent most of my time running around the Citadel completing side quests. Here’s a screenshot of current missions, taken about a week, week and a half ago. I’ve crossed out the ones I’ve completed since. 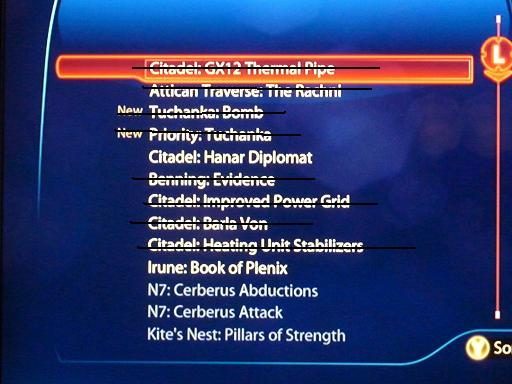 The “Hanar Diplomat” mission is currently bugged and I can’t finish the mission; I spent about a half an hour searching every single terminal in the Citadel, only to find out, like I said, the mission is bugged. Talk about an instant limp dick. That’s time I could have spent searching for my estranged digital-boyfriend.

Once those side-quests were out of the way, I headed to the rachni relay where I MET UP WITH GRUNT <3333. He’s head of Aralakh Company and he’s the cutest Krogan EVERRRRRR. Seriously, if I could hug him without him killing me I would totally do it. Anyway, There were reports of rachni soooo we had to figure out WTF was going on nahm’sayin? 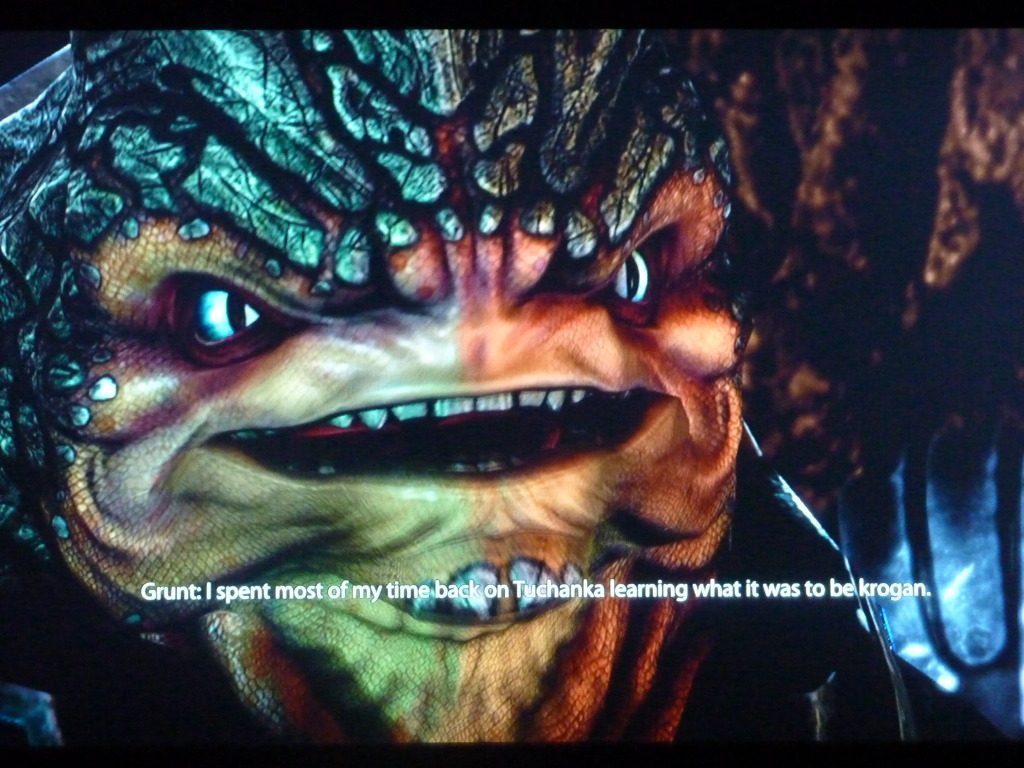 Ultimately I found out the Reapers were fawkin’ with the rachni queen I saved way back in…ME1? Or was that ME2? I can’t friggen’ remember. Of course she had to borrow a Krogan corpse in order to relay her message. That kind of shit always freaks me out. 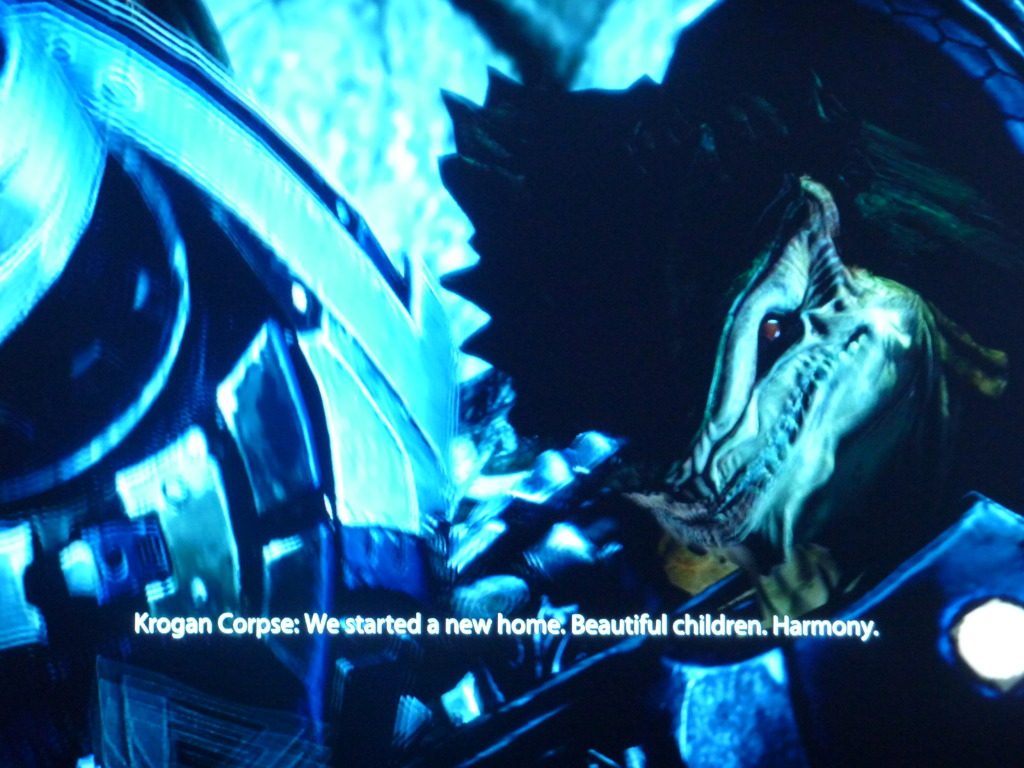 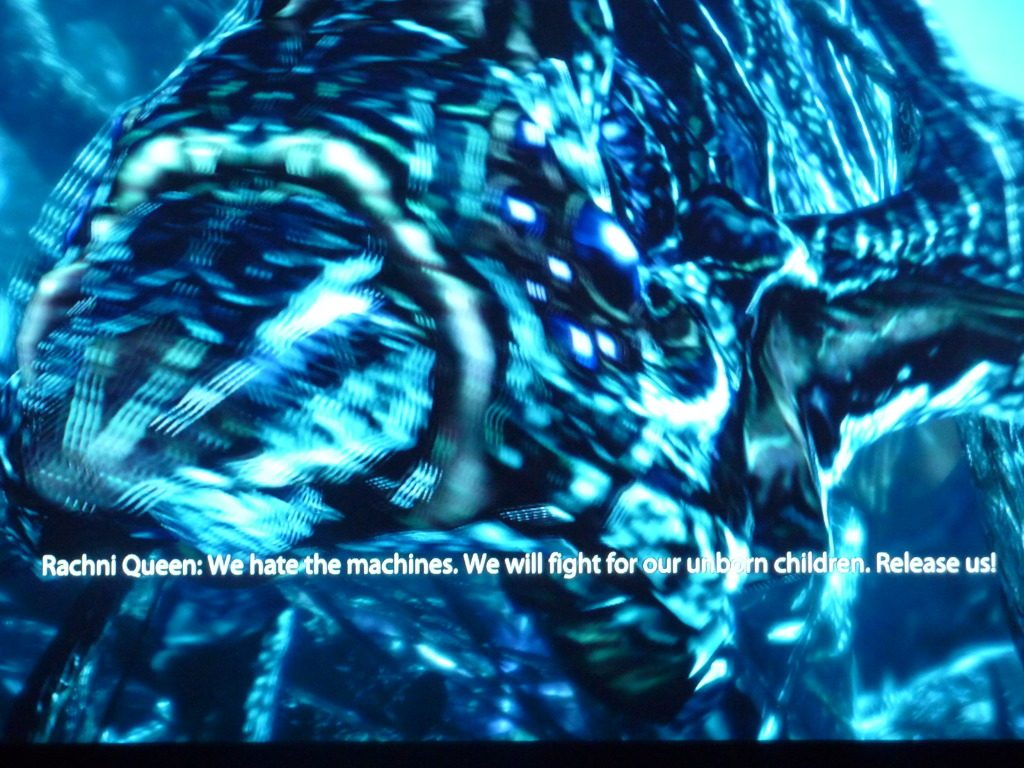 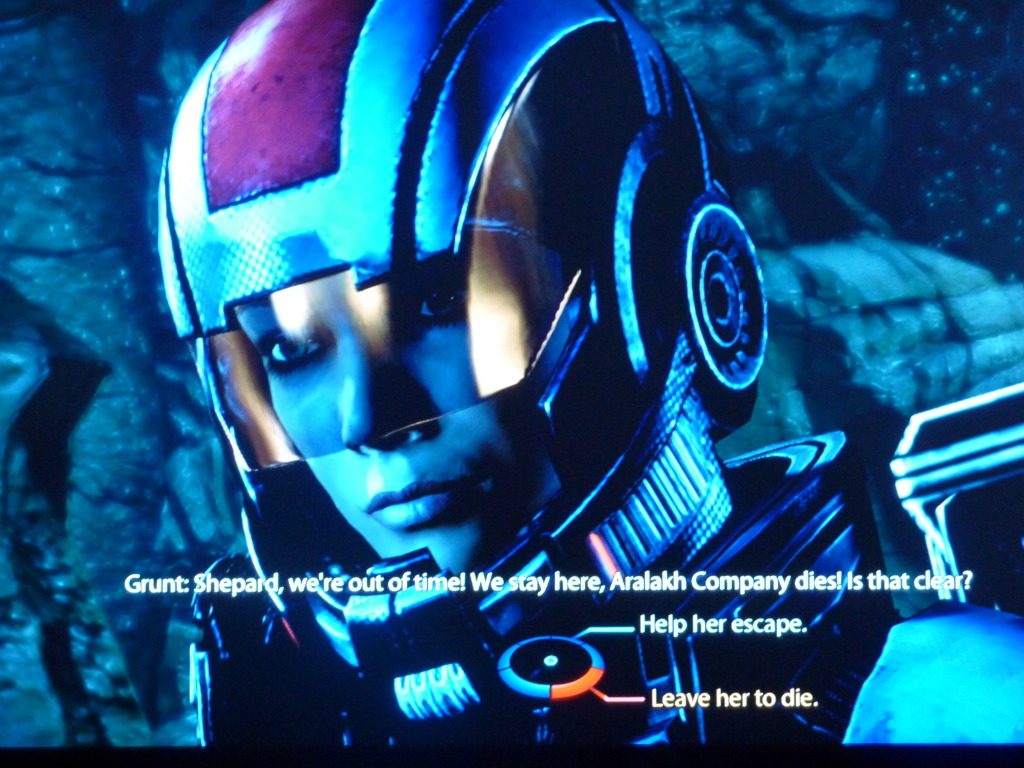 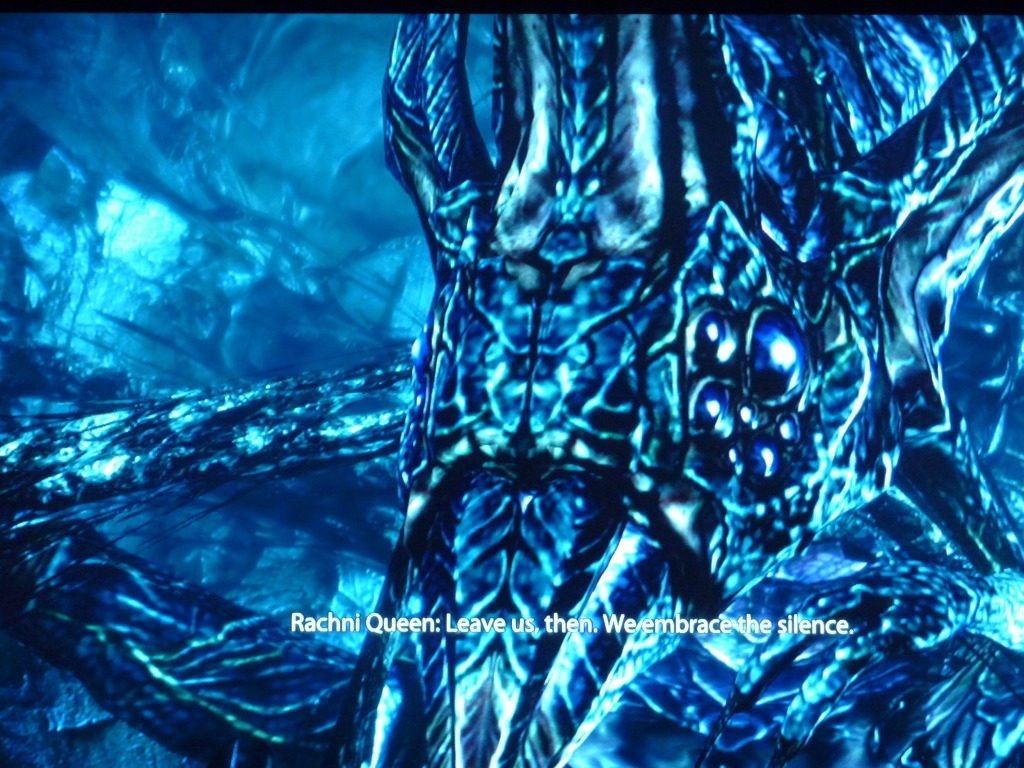 Yeah. That was the first tough call I’ve had to make in ME3, but I let her die. In the end, asset wise, I think it all evens out. I have Aralakh company AND Grunt since I completed his loyalty mission in ME2. If I hadn’t completed his loyalty mission he wouldn’t have survived his lil’ suicide-jaunt he decided to go on RIGHT before leaving the rachni relay. You’re welcome, dude. 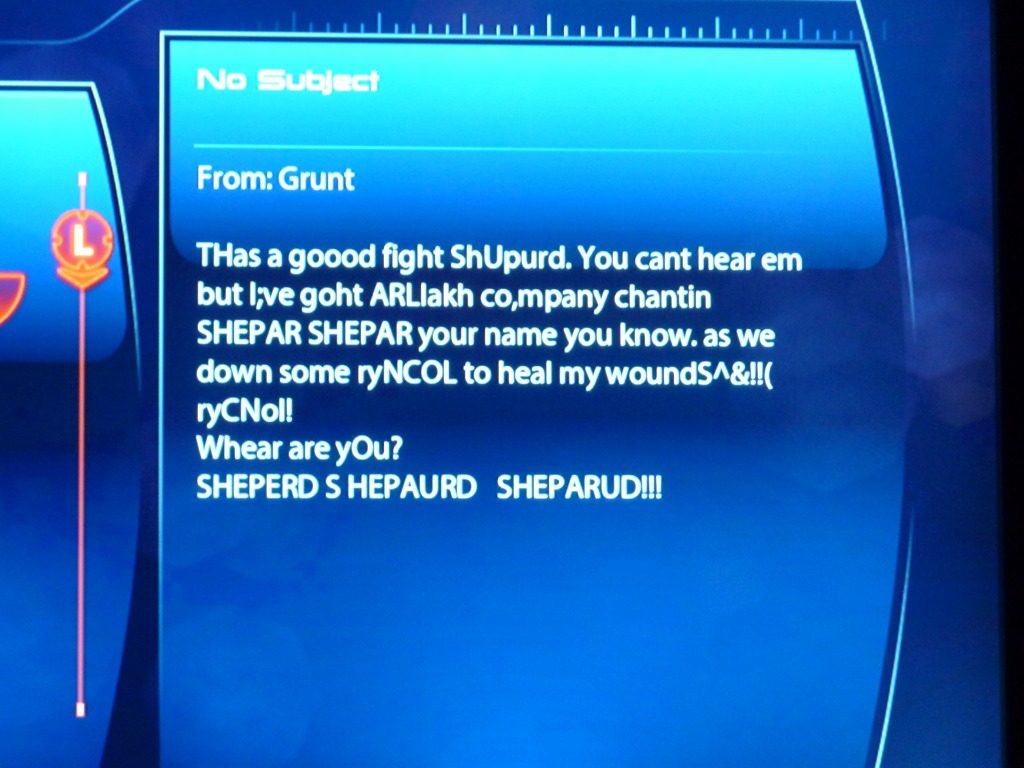 I then messed around on the Normandy:

The next mission on my list was Priority: Tuchanka. I was super stoked about curing the genophage! Poor Krogans. But uhhh unfortunately that mission did NOT go smoothly. AT ALL. 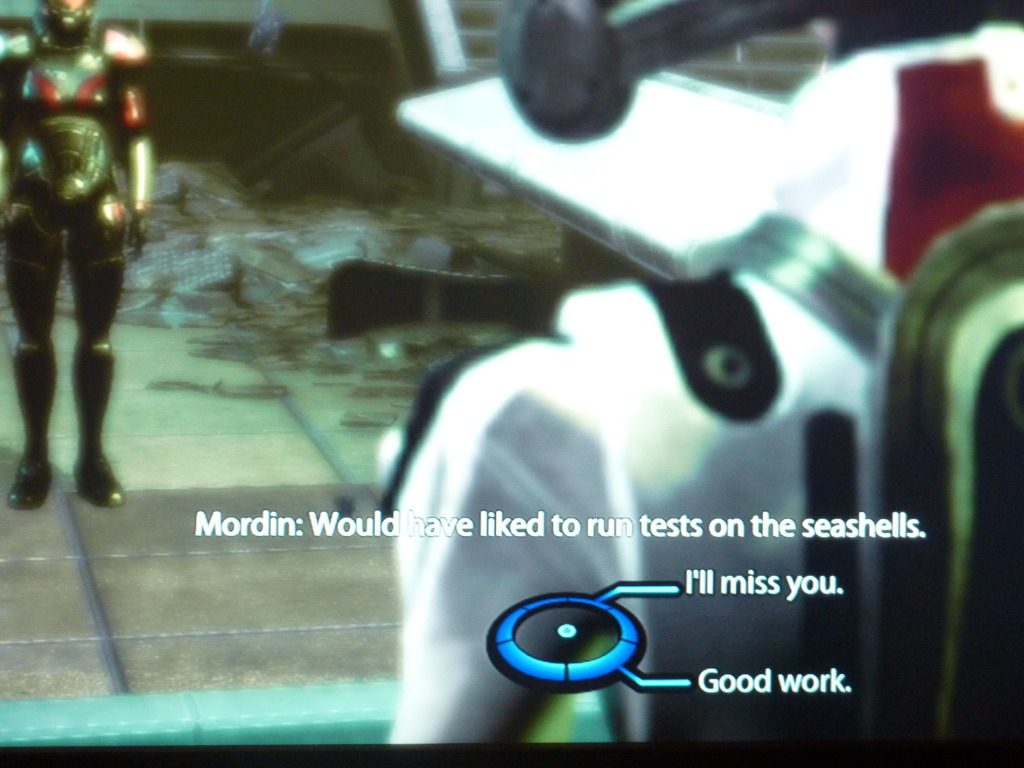 DAMMIT! Bah, Bioware! Why did you have to kill of Mordin?! Okay, I know there are a few ways to prevent his death, but the outcomes of doing so don’t sound pretty. It looks like one of the options is to have Mordin delay administering the cure until the Reaper threat is over, but THAT decision will lead to the ultimate death of Wrex. I know it was the right thing to do (and honestly I don’t remember ever seeing the option to prevent Mordin from sacrificing himself) but I’m still a very sad panda. At least EVE survived thanks to Maelon’s data. 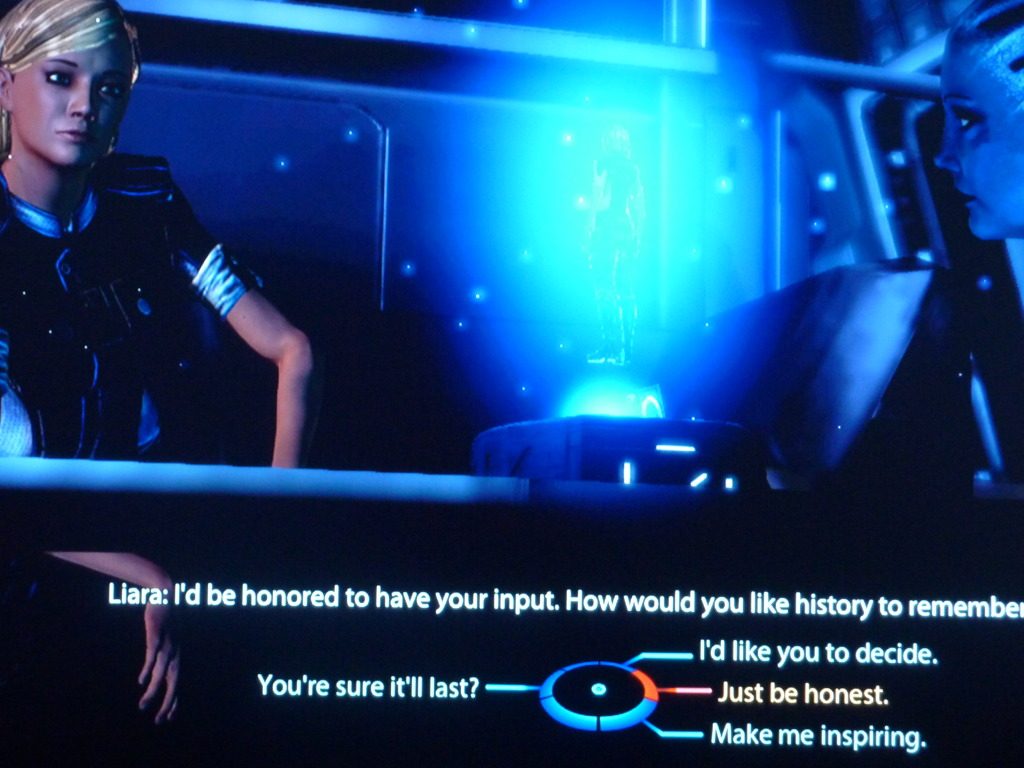 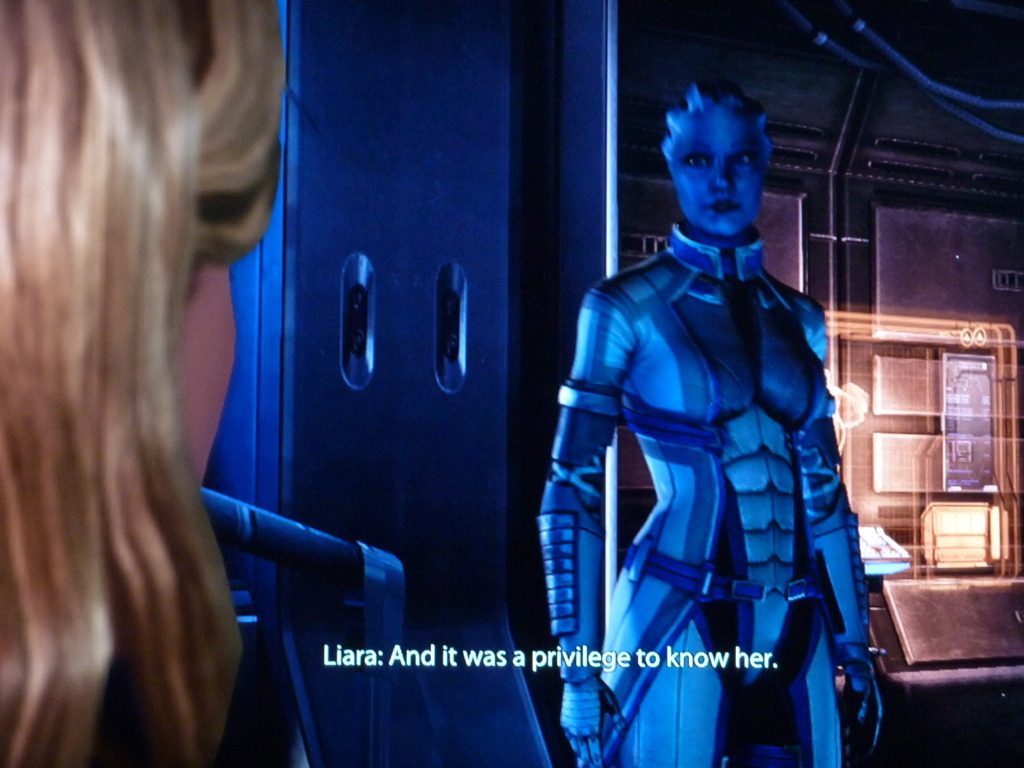 Shepard is so going to die. Not only did she tell Hackett she would “protect earth or die trying” Liara asked Shepard how she’d like history to remember her. HELLO, RED FLAG! Also, thanks Liara. I even helped you find your “father” and everything.

Now, I don’t know what’s in store. I haven’t checked my e-mail, quest log or anything.

All I know is the Dalatrass ain’t gonna be happy about this.