It was the pivotal moment in Dragon Age II I had been waiting for. King Alistair sent Marian Hawke a letter requesting a meeting at Viscount’s Keep.

Now, I knew Alistair would be making a cameo at one point or another, but I was uncertain as to when, and I certainly didn’t think I would hear from him via letter. I expected him to gallantly trot up on his noble white steed and sweep me off of my feet or something.

As I walked into Viscount’s Keep…

EGADS! What happened witcho’ FACE?!! It’s all…contorted! Geez man, I know it’s been six years, but you look like an old man! Your face is like, thin and your eyes are freak-ay! SORR-Y for making you king! Had I known you’d end up that way I probably would have just killed you off!

Hehe. I kid about that last sentence. But for reals…eggggh. But as soon as he opened those thin lips of his and his witty charm and tone of voice flooded my ears, I was smitten. Better yet, he brought Teagan with him! <3

And yes, I LOL’d like the geeky fangirl I am when Alistair said “Swooping is bad.” I LOL’d even harder when Alistair said that he better get back to the “old ball and chain”, referring to my Warden he married in Dragon Age: Origins.

Oh, Ally, thanks for stopping by.<3 Next time you come visit, let me know so I can have a paper bag ready. <3. 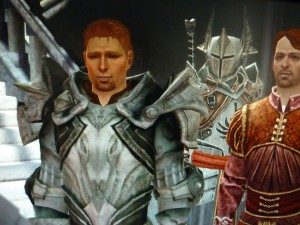