Me: Baby, do you believe in love at first sight?!
inFamous: YES.
Me: Kthnx let’s get married.

Have you ever had that feeling of “Holy shit, this is going to be a fan-fucking-tastic game!” only minutes into it? As a player, you can’t wait to see and unlock everything, yet you don’t even know what you’ll be seeing or unlocking.That happened to me no more than 10 minutes into inFamous. I’m bursting with enthusiasm over this game, and although I know little more than nothing about it, I DO know inFamous will probably end up on my list of top games.
For starters, the post-apocalyptic city is INSANELY immersive. I could easily spend hours just wandering the city streets, eyeing the sights. Sucker Punch has done such an amazing job at making the city of Empire feel like it has just gone through hell. The city has a tint of grey about it, garbage litters the ground, folks are helplessly lying on the sidewalk, beat-up cars are barely shambling down the street, thugs are wreaking havoc…the place is in utter turmoil.

Speaking of thugs wreaking havoc, I found it a little annoying each time one of them would pop me from a rooftop while I was “touring” the city. I’d have to stop running around, and scour the distance for one of the red-hooded bastards. I felt like no matter where I went, I couldn’t just stop and gaze about the city, which sucked.

But once I was introduced to side-quests and the rewards that follow them, I was a very, very happy camper. 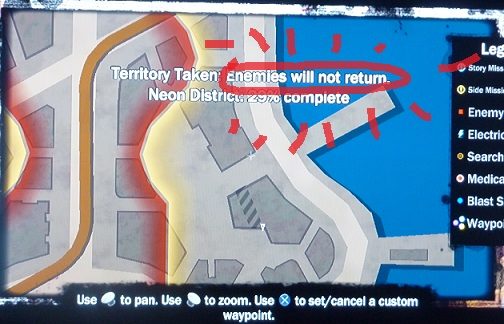 If that isn’t the biggest incentive to complete all of the side-quests, I don’t know what is. I want to see Empire City look purdy and colorful again. I want to be able to walk the city without worrying about being shot in the face. And if the only way that’s going to happen is by completing fun and various side-quests, sign me up.

Now I want to get to know these characters. So far, I’ve met…

Zeke: Supposedly Cole’s best friend. I don’t know much about their relationship before shit hit the fan, but I get the impression the two are close. I’m hesitant to become attached to Zeke because I’m lead to believe (thanks to a spoiler) he’ll betray Cole. May I have misconstrued this? Sure. Had I not read the spoiler, would I still trust Zeke. Meh…he kind of seems like a user, like he’d be quick to look after “number one” and stab Cole in the back in order to earn a way out of the city.

Trish: SUPPOSEDLY Cole’s lil’ girlyfriend…until Cole was accused of being a terrorist, that is. This leads me to believe they couldn’t have been too deep in love, otherwise I’d imagine she’d stick up for him and support him, not, you know, break up with him. If I remember correctly, she had a sister, Amy, who died during the attack. Methinks she and Cole will rekindle their relationship in some way or another, it’ll be all dramatic and suitable for a sappy Jerry Springer episode.

Moya: This is the lady that had be return to the city in search of her boyfriend or something named John. I can’t remember if he is her boyfriend/husband/fuck buddy or not, and I’m not about to look it up because I will be slapped in the face with thousands of spoilers. So. Her and Cole’s relationship seems to be based off of the phrase “I scratch your back, you scratch mine.” Cole returns with John and the Ray Sphere (is that even right?) and he gets to leave the city. Right, like he’ll be allowed to leave the city with his little electricity issue. Clearly she wants the sphere (probably because she doesn’t want anyone finding out about it) and Cole is uh, living, breathing proof of its existence. HA. DON’T FALL FOR IT, COLE!!!