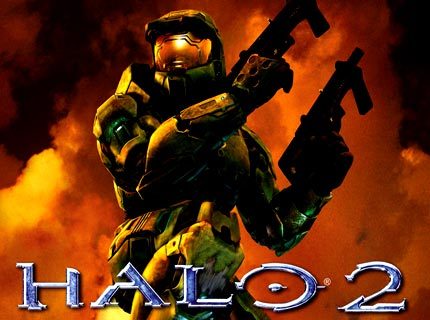 Hey, I have a question: Because I’m starting Halo 2 immediately after finishing Halo: CE, does this mean I’m an official Halo fan?

I think it does. So, I’ll stand here while you give me a medal or something. <3.

Let’s see…the story of Halo 2 starts out with the trial of a covenant Elite commander aboard the Covenant’s mobile capital city of High Charity. The Elite is stripped of his rank, branded a heretic for failing to stop the humans from destroying Halo….

…BAHAHA! Do you think I seriously knew all of that? Allow me to take this moment to give Wikipedia the praise it deserves, for if I were to recall that particular scene myself it would sound more along the lines of ::ahem:: There was a covenant being tortured for some reason. My best guess is that it had something to do with failing to kill humans and such. Anyway, the opening scene also featured Master Chief, Sarge and Keyes’ daughter receiving awards for being studly. I wonder if the crew told Miranda that her father’s face ultimately became his anus….

I haven’t gotten farther than the opening mission, but I must say I am a big, big BIG fan of dual wielding! However, what I’m not a big, big BIG fan of is the fact that realistic firing physics were implemented and now firearms bounce upwards when being shot, which throws off my accuracy. And trust me, my FPS accuracy isn’t that great to begin with. In fact it’s quite awful. I mean, who cares if I shoot an Elite in the knee? He would still drop and maybe bleed out if I shot him just right! It should be JUST as effective as a headshot. ;D

While I’ve heard some great things about Halo 2, I’ve also heard that the story really begins to falter.  Hopefully those of you telling me this are lying! LYING!!!