Here I am, fresh out of Dragon Age: Origins and all of its DLC. Today is May 1st, a month and a half after the release of Dragon Age II, and I’m JUST NOW GETTING AROUND TO PLAYING IT.

But enough bitching about being so late to the party—I’ve done that plenty on this site. ;)

Alright, so Dragon Age II. It would be pointless of me to state that I am excited, as everyone and their mother probably knows I’m a Dragon Age nutcase by now. Because of that “common” knowledge, fellow gamers, during mid-conversation, have let a few things slip regarding Dragon Age II. Here’s what I’ve heard so far, in no particular order:

All in all, the general consensus is that Dragon Age II could have been better. I could care less about what others say about it (someone could say it’s the worst game ever and I’d still by a jillion copies), but I’d be lying if I wasn’t a little worried. The above opinions came from people I trust, so it’s hard to believe there isn’t any truth in them.

Before we talk about what I want from Dragon Age II, you should know that I avoided reading almost every Dragon Age II article I’ve come across. I know little to nothing about the story and the characters. I know the story takes place over 50 years or so. I know Hawke is voiced, and the dialogue is now more Mass-Effecty. I’ve seen screen shots. That’s it.

AND with that, I’m going to install Dragon Age II. 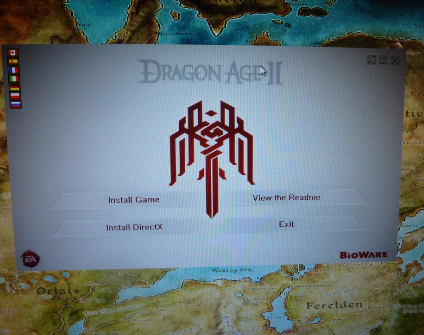 First impression: WTF is that.