An Epic Halloween and I Met A Zombie!1 (sort of)

If I had known my Halloween would consist of 1) My friend being thrown out of a bar 2) Us getting dropped off in the middle of nowhere at 2:30 am and 3) Being stalked; One has to ask. Would I still have removed my ass from the couch and ventured out into the night? Oh hell yes. Nights like Saturday make for amazing memories.

Saturday night I ended up wearing a “Taxi Driver” costume. It was what you would expect, yellow dress, hat, fingerless gloves…the dress was very, erm, short and didn’t serve much justice in the concealing department. It was chilly outside, so I threw on a pair of black pants under the costume. (I didn’t describe this just for shits, it has to do with the story)

I met up with a few of my guy friends and we headed out to this bar called the Little Red Hen. I had never been there, but wasn’t surprised (judging from its name) when I walked in and was bombarded with country music, a live band and country dancing.

The place was absolutely packed, the majority of which were folks in their late 30’s and early 40’s, all in costumes. Initially I had full intentions of taking off the black pants I had worn underneath the costume, but upon discovering I would have been the most scantily clad chick there I decided against it and left them on.

A few hours, several drinks and a ton of dancing later it was announced that a costume contest between folks would ensue. Sitting down, I assumed that contestants would volunteer themselves and be judged up front. I was borderline drunk and figured I would only make an ass of myself if I tried to participate. But noooo. Apparently the judges had been watching people all night, and they were the ones that would pick the contestants. So when I heard “TAXI CAB GIRL! Come up here!” I about shit myself and stumbled my way to the front as my buddies cheered me on.

As everything is getting organized, one of my friends pushed his way to the front of the crowd and yelled, “BRITTNEY! Take your pants off! Take them OFF!” I’m thinking, nah, I’ll be modest, I’ll keep them on.

Next thing I know, I’m taking them off and throwing my pants at him. Oh, alcohol. Thank GOD I had put boy shorts on underneath. Anyway, long story short, I ended up winning second place (I lost to a group of 7 smurfs and their entourage) and getting $75 bucks. One of the employees asked what I was going to spend my money on and I simply replied, “Borderlands”. Hehe you should have seen the look he gave me.

Unfortunately, one of my friends was upset that I lost and began booing. This turned into a shoving match with a stranger, and when the bouncer tried to intervene my friend shoved the bouncer and sort of got thrown out of the bar. Sigh. I’ll never understand guys and your egos. So he and two others ended up leaving, while just I and two other guys out of our group stayed.

Around 2:00 am the bar was closing and it was time to head home. We had met these two girls earlier in the night, and as we were all leaving they asked if we were headed to the University District (which we were), and if so could we all catch a cab together. No problem!

Oh yes. Big problem. In the amount of time it took all of us to get into the cab and hop on the freeway, these girls changed plans and without telling us, told the cab driver to drop us off in the middle of this area called Capitol Hill so they could go to a club. Being in the drunken state that we were, we climbed out of the taxi when the girls did. After the taxi zoomed off and was long gone (and the two girls) was it then that we understood what had just happened.

Capital Hill is a sketchy ass place to be at night, let alone 2:30 in the morning, and since it is on the other side of the freeway it would have taken us at least an hour to walk back home. My feet were killing me, I had a full bladder and was freezing my ass off. But at least I had my moniez.

We walked a few blocks trying to flag down a taxi, but they all passed us by. At this point I couldn’t handle the pain of a full bladder anymore and barged into a club and found a restr 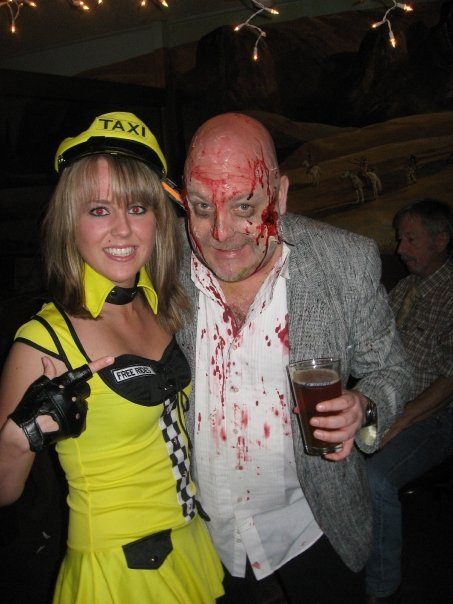 Well, I guess that’s where THAT story ends! GYAH! Damn you IGN and your failed blog transitioning system! ::shakes fist::

The only thing I remember is that the club I went into was playing Super Mario Music and that it was epic. I have no clue how I got home. I think I may have caught a cab? THIS WAS ALMOST THREE YEARS AGO I CAN”T REMEMBER EVERYTHING.

But man, that was a FUN night. I never purchased Borderlands, though….